The Warhawkes are a tribe of primarily dark elven individuals who once lived alongside their Ker'norian cousins. The modern Warhawke tribe was founded by Ereinion Taloha II in Asulon. Their current home is the city of Leyu'celia - a camp which they declare as a home for all elves, mali'ker and like-minded individuals.

While they do not adhere to the same Ancestral worship as their cousins, they have always venerated past chieftains and warriors who have fought for them or alongside them. This is because they are a passionate people that care for one another, and their allies, deeply.

A true Warhawke's heart burns with the ferocious blue flames of Heaven's Fire.

In early Asulon, Ereinion Taloha II approached the gates of a city that glowed the cleanest shade of pure white that he had ever seen. At this time, he did not yet know who he was; thus, he went by the sole name of Rei. As fate would have it, he was allowed to enter the city after being berated by the xenophobic high elves operating the gate. He was given a passport. At the gates of Haelun'or, history began for the Warhawkes.

The forgotten lineage of the wayward Rei would be uncovered in his time in Haelun'or. He would endure being treated like a sub-elven being as he toiled in the farms with Delonna— a high elf who had always been kind to him. He would one day ask for vacation and would travel to the wilds and meet his relatives. He would learn that, by blood and belief of the Warhawkes, it was his lifelong duty to lead the Warhawkes and other ker.

So he did. He left Haelun'or and sought to rebuild his people's home in a far away land with the Subudai. The camp would be built just outside of Ursakar. The Warhawkes would eventually grow to where the camp would no longer accommodate their numbers. They were given a fort in the mountains of Urguan. This would foster a relationship with Urguan that would follow the Kingdom into Athera and Vailor.

The Chieftain Ereinion II built his camp. He lived his life and grew his family. His early death would fracture the Warhawkes and scatter them all once more to all corners of the world.

Following the arrival to Axios, Warhawkes founded a settlement of Riv’vallel in the western plains of Asul by the bandit nation of the Dreadlands. They were led by chieftains Ereinion and Eraynion Taloha. A war, Krajian Rebellion, broke in Asul which marked the first conflict in Axios where the Warhawkes were involved. The war concluded in Imperial conquer of the Dreadlands and dissolvement of the nation.

The spoils of war forced the groups living within the former Dreadlands to split and survive on their own. Exhausted, the Chiefdom briefly relocated themselves under the elven nation Haelun'or and secured a furtive position in a plot of land given by Sohaer Kelthran Iyathir. In this land they rebuilt their capital, honoring the name of Riv’vallel.

Chieftain Ereinion attempted to negotiate an agreement with the Enclave of Ker'nor and lone band of Krugmar Mali’Ker about the unification of Ker. The plan involved formation of a united Ker Nation with many acting leaders ruling their own domains, yet it didn’t come to fruition as a new war separated the Ker even more. The Chiefdom portrayed itself neutral in War of Orcish Submission but covertly supplied the Krugmar with means of warfare. The Imperials were eventually victorious, leaving an ultimatum to Haelun’or. It stated that vassalization of Warhawkes was not legitimate and they would have to leave the elven nation. They submit to the Imperial’s wish and ordered their deserted settlement to be set in flames. They became nomadic once more, surviving on their own terms as they had done for decades. Warhawkes loyal to their chieftain were granted a haven within the halls of Kal'Nikaer, accompanied by refugees of past conflict, Courlanders, Snow Elves and Orcs alike. Others were split across many continents and found their place in Sutica, some went to live in Ker’nor

While finding their course Erolas Bai’kana and Ecaeris Des’nox took the time to mend relations with the Enclave of Ker'nor. Blood was spilled between the two groups over meaningless differences. This internal struggle was ceased with the aid of Jayce Des’nox, a former Ba’ikana. The relations recovered quickly to the point where Warhawkes were offered shelter in Ker’nor

Widespread conflict between Orenian Empire and substantial number of nations broke in the year of 1593. With the rising of the Coalition, the Warhawkes took it upon themselves to join and put an end to the Empire they greatly disliked. Before the final destruction of the Orenian capital. Ereinion, Eraynion and Erolas met up with a few Savoyards and spoke to the High Prince of the Dominion. In exchange for some land to both the Warhawkes and Savoy, the Dominion was to back out of the war and cease all hostilities against the members of the coalition.

The Warhawkes were given a big chunk of land towards the eastern coast of Tahn, by the Dominion of Malin. With this they built their settlement of Leyu’celia. The Warhawkes thrived in this new capital and continue to do so to this day.

Territory of the Warhawke tribe cover land of the Eastern peninsula of Tahn, bordering Savoy to the west and Dominion of Malin to the south. The nature of the Warhawke Chiefdom is mostly thin and hilly forest, revered by the people. Population is concentrated in one capital city, Leyu'celia.

Governing body of the Warhawke tribe is the Conclave of Tahorran. Led by the Chieftain who holds utmost authority and makes final decisions for the tribe that can only be vetoed by majority of the conclave.

Akin to their other Mali´ker relatives, the Warhawkes respect their eldest and to some extent praise their Ancestors and fallen chieftains. The families are distinguishable in their clothing, tattoos and expertise that is passed to the posterity.

The Ba’ikana are what remains of the Comet Guard of old. Back in the old times, they served as the Chieftain’s, and the Chieftain’s family’s, personal bodyguards. Disciplined strategists and warriors by trade. They study maps, and often times act as scouts for the tribe.

The Othan are a broken branch of the old tribal doctors. They wear masks that they take on and off at will. They are a bit cooky at times. Ereinion would tell you it’s a result of being around so many fumes of whatever medicine they’ll be cooking up. As loyal to the Chieftain as the Ba’Ikana are.

Read more of the Families

A Warhawke is commonly a pure Mali'Ker. They are often seen wearing tribal-like wear that includes sashes, beads, a mohawk, or face paint. Their primary weapon of choice is a lapis tomahawk that is often adorned in feathers, lapis beads, and a fine wooden handle of either acacia or spruce origin.

The Warhawkes are Mali’ker astronomers. They are believers in Igne’acaela, and the spiritual traits within lapis. The tribe is well-known to do research pertaining to the sky and the stars, as well as studying machinery, the art of war, and properties of lapis. Lapis lazuli is praised and admired by the entirety of the Warhawke tribe. Every member has a family piece that is passed down to them by their bloodline. While it may not necessarily be always on their person, it is always protected and safe. Never forgotten.

The tribe uses the material for weapons, jewelry, and household decoration. The gifting of lapis from one Warhawke to an outsider is a great sign of respect. Respect is most important to the Warhawkes, respect for all things. Pride and family are held dear to them.

All aspiring Warhawkes leap through the flames of a log that is burning blue. If they come out unscathed, they are a true Warhawke.

Warhawke art is present in their clothing and tattoos. They adore jewelery; charms, necklaces, bracelets, earrings and more to go with their clothes of various colors. Many leave part of their skin bare to boast tribal tattoos, often representing their family.

Warhawke architecture involve different sort of flashiness than human settlements as no stone or materials of earth is used in their buildings. They do not only wield an axe in combat but are skilled lumberjacks as well. Thus their camps are built of wood and canvas of many color.

Den Mothers are women of the tribe who act as mentors foremost to their own family, but also to the tribe as a whole. The title is usually passed to their offspring whom are taught from a young age. They assist in matters of their own family but are also tasked with a specific role for the common good. In combat some join the ranks at the front while others stay in support as medics.

Read more about the Den Mothers

The belief in Igne’acaela dates back to the fourth Chieftain who had a vision of a large burning blue meteor sailing through a black ocean of light, translated as Heaven's Fire. The Warhawke tribe believes Heaven's Fire to be their savior. Believing that it's flames will be so great it will purge the very soul of it's sins.

Not to be confused with shamanism, a Warhawke Shaman is not so much of a mage, but being a shaman is mostly just a title and they are viewed as priests. They perform funerals, marriages, and other holy events. The shamans are also viewed as radicals in the tribe, and usually create new customs with the crazy ideas that they think of. Though they may seem crazy, most of them are gifted with a wide amount of wisdom. 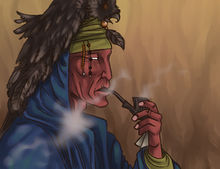 They also speak with The Council known also as the gods of the Warhawke tribe by praying to the stars. Each star is said to be the soul of a dead warrior or chieftain that is known for affecting something in the tribes past. The Shamans can also tell important events of the future, but are not permitted to tell the events to anyone for the information may change the future and cause something of catastrophic proportion. This skill of telling the future is the most important skill that a Shaman will have and it is what gives the Shaman its dire importance.

A Warhawkian funeral is done by wrapping the body and head separately in heavy wraps of linen. They are burned together atop a pyre of wood. During the funeral, each Warhawke will take turns tossing wrapped lapis dust which will slowly turn the flames of the pyre blue in color.