The Dominion was the largest Elven nation on the continent of Atlas until the 15th of the Sun's Smile, 1686. It was the union of three states, vastly different in race, culture, and values, yet united in government, in law and in times of war. These states were the Principality of Laureh'lin, the State of Norseth'onn and the Auxillary of Ker'nor- but in later years, they became districts in the greater whole, being the segments of Irrinor, Valleinor, and Velunor respectively. The Seat of Elvenesse was in Caras Eldar, which was widely considered the Jewel of Elvendom on Atlas.

In contemporary history following the Elven Cold War, the Dominion of Malin was dissolved by Queen Awaiti Aureon, and its remnant the State of Irrinor was annexed by the Kingdom of Gladewynn. Following the collapse of Gladewynn, Irrinor became a free and independent state that resided in the Middle East of Arcas, up until its internal collapse and abandonment.

The Districts of Caras Eldar 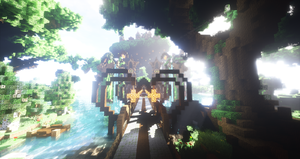 The Wood Elven state from which the district was forged was born in during the time of the Phaedrus’s rebellion. Laureh'lin, as it was then called, was formed in conflict against Haelun’or when wood elves lived under the high elves. After expelling the Aheral from their home, Laureh’lin (later Irrinor) would fight multiple wars with the Silver State before finally finding stability as a client state of Oren for a few decades before becoming a member of the Dominion of Malin. The state's (and later district's) culture follows the religion Aspectism, and almost all of its citizens are devoutly dedicated to the two gods of nature. Malin is also revered heavily, and his teachings held close to the people’s hearts. Because of their religion, void magic and all things un-natural to the circle of life are considered distasteful to the elves and their teachings disallowed. 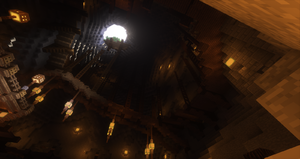 Ker'nor, the dark elven state which would become the district of Velunor, was born during the rebellion against Haelun'or, similarly to Irrinor. The lone dark elf Dak’ir Des’Nox took up rule and led the few dark elves mixed within the wood elves at the time. They left the high elves, taking up neutrality when war broke out between the Silver State and Laureh’lin. Eventually the dark elves were forced out of Haelun’or, and made to ally with Laureh’lin. Over time, the dark elves became the few members of the Dominion of Malin. Dark Elves do not have a religion as other races do; rather, they revere the spirits of their deceased ancestors. Because of the banishment of the worship of the moon goddess, ancestral veneration became the dominant belief among the dark elves. Shrines, statues, uttered words, and honourable actions are the way the Mali'ker pay respects to those that came before them, and any dishonorable actions is an affront to these spirits. 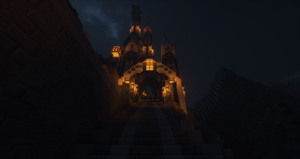 The district of Valleinor was formed of the shards of Norseth'onn, which itself was formed following the concession of the Island of Celein to the Dominion of Malin. Originally founded by Ac’Aelu Tinuvial and Titania Hawksong, Norseth’onn was merely a Dominion controlled settlement before a period of growth and scientific progress allowed the city to be granted its position as the third state of the Dominion of Malin. After the rebellion of Ac'Aelu Tinuvial and the Order Absolute in the early years of Atlas, however, the state was seized and reconstructed by Princess Titania Hawksong and Prince Belestram Sylvaeri, who envisioned it as a home for the Elder Houses of Elvendom and a place of peace dedicated to the memory of Malin.

Note: Some of the information listed below is historical events told in the eyes of the Dominion

Overview: The Dominion of Malin was originally created with the signing of a between as a pact between the three Elven subraces, the Wood Elves of Laureh’lin, the High Elves of Haelun’or, and the Dark Elves of Ebonglade. All three states were united under the kingship of the Mali’ame Tristin Tresery, who previous had served as the Prince of Laureh’lin during the state’s tenure as a Principality in the Empire of Oren.

The Dominion lived stably for a time, until tension began to brew in Haelun’or, a state with a long history of aggression towards the rest of Elf kind. With growing incidents of the likes of the King having to extradite two ‘impure’ children from a Haelun’or cell, taken outside of royal jurisdiction, and the unwillingness of the Silver Councillors to discuss Dominion-wide laws, it soon boiled over.

Haelun’or rebelled against the king they had sworn a sacred oath to as soon as they saw the opportunity to, joining an alliance of Orenian rebels, the bandit nation of the Dreadlands, and the Orkish horde when it rose. The Dominion fought alongside the Empire of Oren during this war, which never saw any direct conflicts. Soon, the alliance, like all before it, dissolved away, and Haelun’or, now lacking allies, quickly surrendered to Oren as they’d done many times before. Following Haelunor's surrender, the Dominion did not aid their onetime member state and allowed the Empire to rule Haelun'or directly, seeing it as a nation more detrimental to Elven unity than beneficial.

While the Dominion had survived in the face of rebellion, it was then short one state. To fill the gap, the King turned to Norseth’onn, a city of mages with a significant population of high elves, living on land originally gifted to them by the Dominion. Norseth’onn was willingly integrated into the Dominion as the new third state, under the leadership of Princess Titania Hawksong and Prince Ac’Aelu Tinuvial.

In the post war age, several changes were made to the Dominion’s governing body. What had been previously known as the ruling council was changed to the Princely council, with one Prince hailing from each of the three states representing their people. The King Tristin Tresery altered his title to High Prince to better reflect the days of old.

Princely Council - Prior Government of the Dominion of Malin

The Princes of the Dominion of Malin are the legislators and representatives of the Elven people, and are typically of noble blood or Seed. They hold the powers vested by the Treaty of Adriante to pass legislature, veto the aforementioned, elect a High Prince of the Mali, eccetera.

Officially the Prince of Foreign Relations, Prince Khaine worked to establish the Virarim in the early days of Atlas and was one of the three Bronze Princes who joined the Council after the Treaty of Adriante.

The representative Prince of War, Prince Kairn led the Bronze Rebellion and is still known in some circles as 'The Bronze Lord'. He is another of the Bronze Princes, and is known in particular for his unbridled violence towards the enemies of the Dominion State which was forged by the joining.

The Princess of Irrinor and vaunted former High Princess, Awaiti served the realm during the conclusion of the Bronze Rebellion, bringing together the fractured state. The youngest of the Princely Council, she maintains a devoted following among the Aspectist majority of the Dominion.

The royarch of Valleinor and a seasoned member of the nobility, Princess Titania bears the honour of having been a High Princess of Malinor in centuries past. She is known for her work in the Elder District as well as for her work with the Rochir knighthood and other military auxiliary pursuits.

A longtime spiritual leader among the Dark Elves, Dak'ir took up the position in the early years of Atlas. His word stands as law to many of his people, and is well-beloved by all who know him. He is notable as the progenitor of the shamanistic religion to modern Dark Elves, and is well-versed in the tradition.

The Dominion is home almost exclusively to elves, yet diversity runs rampant even within this species alone. As such, society and culture in the depends on which corner of the Dominion one stands in. As the mali of the Dominion roam between states and intermingle among each other, racial diversity has become more of a spectrum rather than defined lines. However, the most prominent people groups lend their cultures to the melting pot of the elven Princedom.

Commonly known as wood elves, they are the most populous of ethnicities in the Dominion. The mali’ame are synonymous with the Aspectism faith and the ancient path of Malin, which calls for the worship of said Aspects. They are shorter in stature, dark in skin and crimson, brown or black in hair.

Commonly known as dark elves, they have always occupied a significant and stable niche in the Dominion and its predecessor states. The mali’ker are a stoic and conservative people who bring their spirits and their ancestors to the wide pantheon of worship within the Dominion. They are more muscular in build, ashen skinned, baring silver or dark hair and gemstone coloured eyes.

The Elder Elves of the Dominion, or Mali'laurir, mainly live in Valleinor. They are representatives of ancient Houses, which stem from direct sons and daughters of Malin. Some mali’laurir follow Aspectism like the wood elves, but most maintain a more traditional veneration of Malin and sometimes of other Gods. Their current bloodlines are Sylvaeri and Hawksong.

There is a small but resilient population of High Elves dwelling within the borders of the Dominion, mostly in Valleinor. Typically considered 'impure' by Haelun'or or simply desirous of a less restrictive life, some have turned to Aspectism and other Dominion rites rather than the High Elven laws of purity.

The Capital of the Dominion in Atlas, Caras Eldar consists of three districts and is home to all Elves.