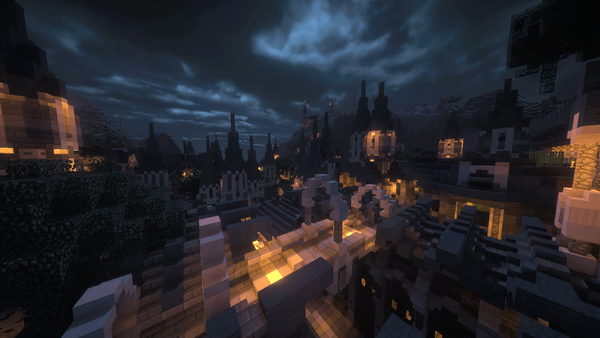 Taliyna'maehr was the capital of the High Elves and Haelun'or in Axios. The city was situated in the western mountains of Tahn. Because of its eccentric architecture and technological advancements, many travel there to marvel at its beauty and innovations.

The High Elves settled in the mountains of Tahn in 1571 after fleeing from Vailor. The original city was designed and built under the Sohaership of Kelthran Iyathir and the Maheralship of Lelien Synalli. Due to later complaints criticising the practicality of its design, the second Sohaer of Taliyna'maehr, Parion Tahn'thill, sought to have the lower district renovated. The project commenced soon into his Sohaership, leading to Vallel'Yuln Aeléyèlsa being appointed as an unofficial architect. Near the end of his tenure, she submitted the final design, though its construction was delayed. During Oren's coup d'etat, Parion Tahn'thill was sentenced to execution, leaving his vision uncompleted. This led to a period of significant discord and confusion as Haelun'or was transferred to the city's first Uthir, Orsino Acal'elor - a political measure coordinated by the Orenian Emperor, John III.

Taliyna'maehr is nestled in the mountains of western Ceru. These natural barriers serve as a great defense against raiders and sieges, giving it an ideal location.

Haelun'or is ruled by a council of mali'aheral known as the Heial'thilln. The Heial'thilln is led by the Maheral and consists of two Medi'ir and up to four Okariran. The Maheral diligently works alongside the government as a cultural leader, carefully preserving the blessed practices and beliefs of the mali'thill.

The Society of Taliyna'maehr consists of two districts, both offering places of residence for accepted citizens. As established in Vailor's Lin'sulan, the Lower District of Taliyna'maehr is reserved for members of lesser (those who are not mali'aheral) races who have proven themselves as indispensable assets and, therefore, capable citizens.

Normally, the Lower District is the only section of the city open to all visitors and accordingly, over the course of Taliyna'maehr's usage, the gates have frequently undergone guideline revisions depending on the liberality of the Heial'thilln. An open-gate policy was used extensively while Haelun'or was recovering from the coup d'etat and, perhaps, may have been its harshest. Under Oren's Martial Law, gates for both the Lower and Upper districts were kept open at all times and humans were granted full freedom across the state. Since autonomy has been returned to the mali'aheral, the open-gate policy for the Lower District has been returned sporadically. However, without dispute, access to the Upper District is strictly reserved for mali'thill and those permitted entry under the supervision of the council.

Despite the growing normality of an open-gate policy, many mali'thill still wish to see the practice eradicated so they may return to a more traditional and isolationist state.

The Culture of Taliyna'maehr revolves around maehr'sae hiylun'ehya and the concept of purity. Maehr'sae hiylun'ehya translates to 'Progress and Health' in Elven, and is a cornerstone of the mali'aheral culture. Progress refers to the progression and yearning for knowledge, with Health referring to purity and physical health. Purity is defined as being a pure-blood mali'aheral.

The literature in Taliyna'maehr is very diverse. Some citizens choose to document their studies of alchemy, arcanism, and more, while others choose to write poetry and literature. All of these books, however, are housed in the Eternal Library, the ultimate location for knowledge of Taliyna'maehr. It is mainly non-fiction, as mali'aheral normally find that fiction books are time wasting and pointless.

The majority of people of Taliyna'maehr do not follow religions, as they feel it takes away from their pursuit of knowledge and maehr'sae hiylun'ehya. Instead, they tend to focus on their inventions and innovations.

However, a small section of High Elves do participate in the worship of Tahariae, the Aengul of Purity. Their clerical order is known as the Ethallimiran. This is the first case of an aheral religious group being accepted by the general populace. Over time, this religion has died down much, and it is a very rare sight.