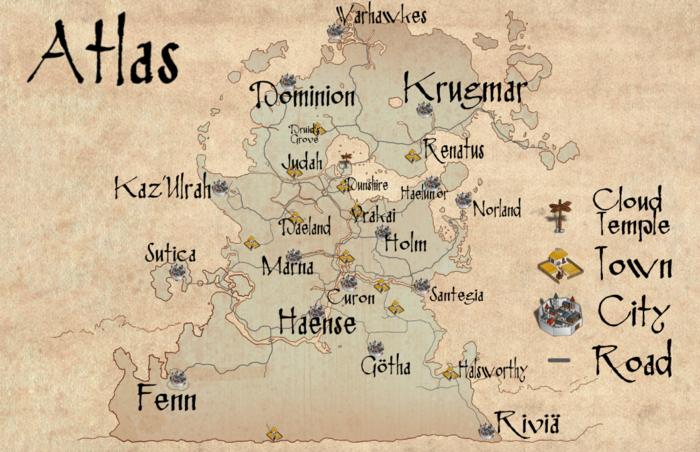 "The Map of Atlas"

Atlas (1643-1704) is a wild, mostly uncharted landscape that has little mention in ancient texts. The abandoned continent, dotted with Orcish ruins and Elven monuments, is sacred to a number of religions and magic arts for various mysterious reasons. Some parts of the land display a gorgeous majesty that stand as a testament to this beautiful and almost untouched landscape. A faint stillness rests in the air as if all of the land, trees, and rocks are holding their breath for the next stage of the play. The few ruins that still exist hint towards a struggle who's stories lay hidden under the wild voracious overgrowth, a story that's been patiently waiting to be dug up.

Altas is a wild and untamed landscape with an unknown origin and many mysteries.

Atlas was first discovered by the Descendants as they fled the ruined landscape of Axios. They followed a naval chart that had shown the way to a potential new home, but were blown off course in a sudden barrage of bad weather. The Descendants soon found themselves on the peninsula of Atlas.

1644-Bogdun Goldhand was crowned the new High King of Kaz'Ulrah.

1645-Confederation of Hammers was founded.

1646-Torvin Blackaxe was crowned the new High King of Kaz'Ulrah.

1658-Confederation of Hammers was disbanded.

1665-The Second Confederation of Hammers was founded

1680-Kingdom of Bogrin was founded.

1690-The Confederation of Hammers and Kingdom of Bogrin were united into the Kingdom of Agnarum.

1692-Kaz’Ulrah lost the Third Atlas Coalition War and was disbanded.

End of the Map

Atlas fell because of a long campaign of "The Vaeyl", there were Red Vaeyl and White Vaeyl who breached the giant ice wall that covered the northern area of the realm. The White Vaeyl sided with descendants and were trying to siege the Red Vaeyl who were trying to snow over the continent and freeze out descendants. Humanlike in Nature but were mostly unrecognizable. In any case, descendants after a months long siege of the Red Vaeyls keep in the south destroyed it and killed the majority of their leadership- passing through the wall as promised by the White Vaeyl to pass onto the other side of what would be Arcas. As we fled towards the new world, we found remnants of an old civilization and killed the remaining Red Vaeyl and landed on Arcas which we claimed as our own while the White Vaeyl inhabited the remains of Atlas

Atlas is a single continent surrounded by a band of islands. The temperate center of Atlas stood between the extreme deserts and mesas in the north and the frigid tundras in the south. A large ice wall in the south prevents entry into the land of Arcas.

A ruined castle which sits in front of the intimidating ice wall in the south. Wind howls through the hollow walls of the fortress and ghostly figures are sometimes reported to gaze out at any who travel too close to their vigil.

The verdant and bustling capital of the Elven Dominion in the forested north-western corner of the continent. Close to its stone walls sits a mysterious spire of pale stone, a relic of the ancient Elven civilization which inhabited Atlas in years long gone by.

Carolustadt Capital of the The Empire of Man

Belvitz A human city under the Empire of Men

Name Capital of the War Nation of Krugmar

Presa de Madera Capital of the Kingdom of Santegia

Edel Silvervein Shortest ruling High King of Kaz'Ulrah, one of the formers of the Confederation of Hammers