The Kingdom of Santegia, more colloquially referred to as 'Santegia' (Savinian: Santugia Erreinua; Santegian: Reino de Santegia; Akritian: Santoun'gea; Qalasheen: Shayti Makan; Flexio: Regnum Santum), was an independent nation located on the island of Asul, bordering the Sultanate of Haria to the north and the Reformed Kingdom of Courland to the west. Santegia comprised of two separate geographical regions: the Valley of the Heartlands and the Cascadian Peninsula. The majority of its populace was concentrated in the valleys, divided politically into various fiefs - vassals of the Kingdom and the crown. The Peninsula was located on the south-eastern most tip of Asul, and was characterised by a wide array of tropical biomes as well as once being the capital of the War Uzg.

The unified Kingdom of Santegia emerged as a result of the Second Axionite Coalition war against the Holy Orenian Empire, initiated from internal tensions between the Principality of Evreux and the Duchy of Savinia. This war would last from 1617 to 1619, ending with the dissolution of the Principality of Evreux and the subsequent declaration of the Kingdom of Santegia. The first monarch was King Abdessamad, who was crowned on the 10th of The Deep Cold 1619.[1] The current reigning monarch is Achilius de Savin-Horen y Esfandiyar, crowned on the 12th of the First Seed, 1658.

The origin of the name Santegia can be traced back by analysing its Savinian equivalent, Santugia, a name which was derived from the word Santutegia meaning sanctuary. This was the original name used in Savinian culture referring to a place which has garnered the status of home and therefore that of a safe haven from the outside world. Eventually the word deviated in spelling and pronunciation, evolving into a separate name and entity, becoming synonymous with the lands in which the kingdom now resides.

The Duchy of Savinia obtained short independence and autonomy with the collapse of the Kingdom of Courland, before almost immediately becoming vassals under the Sixth Holy Orenian Empire.[3] Internal struggles would resurface yet again, as the imperial crown pressured the Duchy of Savinia to reintegrate into the Principality of Evreux, the puppet successor state to Courland; such an act was frowned upon by the Duchy as it would thereby reduce its own political power. These internal pressures would amount to an apex, in which the Principality of Evreux and the Holy Orenian Empire would see the Duchy of Savinia as a rebel state, declaring war in 1616.[4] This act of constant resistance was seen as an act of defiance against the imperial crown, spurring anti-imperialistic sentiments yet again across Axios, before finally perpetuating into a full on coalition war against the empire.

The first skirmish between the Coalition forces and Imperial forces occurred at the Battle of Castell, in 1617, where the Duchy of Savinia and its allies defended the Barony of Castell against the invading Evreuxians and Orenians. This conflict would result in a swift victory for the defenders; therefore setting the tone for the rest of the war, by establishing the Coalition forces as the dominant side and exposing the weakened state of the Holy Orenian Empire.[5]

In 1619, the Siege of Trier occurred, this final conflict would yet again be a decisive victory for the Coalition forces. The results of the siege forced the final Evreuxian forces into submission, and the Empire into paying war reparations for engaging in the conflict; thereby allowing for the establishment of the Kingdom of Santegia.[6]

The years that followed the Santegian Rebellion were a period of peace and slow growth, with much of the national focus on the consolidation of power. Although, a few notable clashes occurred between Santegia and Oren, which highlighted the need for an increased focus on the military for the defense of the nation. The most notable of such incidences was the kidnapping of the King by House Romstun, during their vassalage under the Holy Orenian Empire. The Gromach incident of 1626 also sparked a period of increased tensions between the Empire and Santegia; although it was ultimately settled with reparations from Oren. In addition, ample time was given for vassals to grow and develop, allowing them to cement their grasp.

On the 8th of the Grand Harvest, 1629, Abdes de Savin abdicated, electing Leoiarizaltzu de Savin as the heir to the Santegian throne. Almost immediately, the nation underwent socio-economic reforms that bolstered activity across all sectors. In addition, he enacted policies that militarised its populace to create the largest independent armed force within a period of four years.

In 1630, during the wake of the Dwarven Civil War, the Axionite Assembly of Axis Powers was established in opposition to the Holy Orenian Empire and the Grand Kingdom of Urguan.[7] Subsequently, Leo de Savin would grant the reformation of the Kingdom of Courland, by bestowing upon Alexander Staunton land for such an endeavour. This resulted in the transfer of the Duchy of Courland, County of Aleksandria, and Barony of Curonburg back unto Staunton sovereignty.[8]

On the 3rd of the Grand Harvest, 1638, Thomas Tarsington-Keint declared the Barony of Keintania independent from the Kingdom of Santegia after he was accused of a multitude of crimes, resulting in a failed and short lived rebellion. He was captured shortly after and executed for first degree treason. Days prior to the siege of the Barony of Keintania, Thomas Tarsington-Keint was captured for a second time and imprisoned within San Adrián, being held there for the duration of the siege. On the 7th of the Grand Harvest, 1639, the Santegian forces along with troops from Norland, Caminus and Kaz'Ulrah, marched on the Barony of Keintania and laid waste to the rebelling forces. Thomas was kept captive for days after, having his conviction raised to second degree treason. As a result, he and his kin were stripped of their titles and scrapped from all official and unofficial document - left to be forgotten to the winds of time.

On the 13th of Sun's Smile, 1639, the Kingdom of Santegia and the Sultanate of Haria united through the Personal Union of their respective rulers - Leoiarizaltzu de Savin and Soraya Kharadeen - thus forming the Kingdom of Santegia-Haria. The councils and nobility of both realms were merged into one while retaining their peerage.[9]

The Kingdom of Santegia was divided into two major regions: the Cascadian Peninsula, which lies to the south-eastern most tip of the island of Asul; and the Heartlandic valley which rests in its centre.

The royal Duchy of Cascadia incorporates the peninsula in its entirety. Its jungles were home to the native Hou-Zi who had long lived in isolation, even prior to the rediscovery of Axios and the subsequent great migration. The first colonisers of the jungle were the orcs of War Uzg who held the lands until its fall. In the aftermath of the Siege of San'Kharak, the final conflict in the War of Orcish Submission, the territories were annexed to form the province of New Cascadia under the Empire. The Eagle's Rebellion would soon follow suit, resulting in the dissolution of the Holy Orenian Empire and the transfer of Cascadia to the Kingdom of Courland. A long series of conflicts would follow until the Duchy of Cascadia finally fell into the hands of the Kingdom of Santegia. 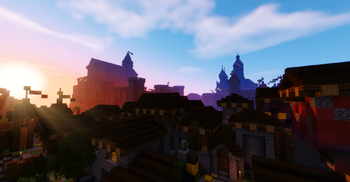 Held within the lush jungles of Cascadia were the ruins of San'Garath and the palace of Jintaiyuan, a vast monument of a bygone era from the once great Empire of the Hou-Zi. To the north lay the badlands, a barren wasteland filled with lava pits and large skeletal structures, marking the northern boundaries of Cascadia. On all other sides, the duchy was bordered only with the Axion sea.

The fertile Heartlandic valley was not only known for its natural beauty, but also serves as the epicentre of commerce on Asul, due to having the largest concentration of people on Asul. Fraser river runs throughout the valley and into the bay of Biscay to the east, serving as the main source of water for the population that live there. The royal Duchy of Savinia was located to the east and serves as an important strategic base for the Kingdom, as it provides the only access to the sea of Axios from the valley, as well as sharing the only border with the Sultanate of Haria.

The iconic Veldin Palace, the ducal seat of House de Savin, lies on a river island sandwiched between the march of Ponzan and the march of Seville, overlooking the bay of Biscay to the east. The most notable feature of the palace was its sheer size, containing over fifty rooms and halls, a central quadrangle, and an enclosure for the barracks of the Savinian Brigade. In addition, its abodes were adorned with vibrant murals, and houses the House of de Savin and the ducal court.

Veldin Palace was built upon the old ruins of Vilachia, of the now defunct Principality of the Dreadlands, and the mysterious artifact of the Veldin - of which the Order of the Veldin was sworn to protect - to which stands as a monument to all cultures and heritages, to the protection of the Duchy, and to the crown of Santegia.

Over several decades, the settlements around the Veldin Palace merged to form a single city - which would become the capital of Santegia as San Adrián - combining the counties of Castell, Moncloa, and Veldin. The city was located between the intersection of the marches of Seville and Ponzan, and was easily one of the largest on the Isles of Axios.

The coat of arms for the Kingdom of Santegia and Haria consists of 14 quarterings, with each quarter symbolising the heraldic achievements of the nation, which has been obtained either through conquest or heritage. The territorial claim held by the royal family is featured as an inescutcheon, through the superimposed arms of de Savin y Kharadeen upon the arms of the Kingdom of Santegia. The fleur-de-lis upon green represents the Principality of Evreux, a reminder of the Santegian Rebellion which resulted in its conquest and the prompt establishment of Santegia. The quartered variants of the Horenic dragon on purple and the Dreadlandic cross upon red represent the island of Asul, which was united in its entirety under the Kingdom of Santegia. The Principality of the Dreadlands being the first nation to colonise the valley of the heartlands, who were promptly conquered by the Holy Orenian Empire on Asul.

The royal blazon is as follows:

Quarterly, ﻿first and fourth quartered: Vert semé-de-lis Or overall on a Sable bend three eagles Argent (for Evreux); second and third quartered: first and fourth Purpure dragon Or (for Oren), second and third Gules saltire Argent (for Flay); overall a quartered escutcheon, first and fourth Purpure dragon Or (for Horen), second and third Tenné six bendlets sinister Or (for de Savin). For a crest, a circlet Or and precious stones﻿, with eight rosettes, five visible, and eight pearls interspersed, closed at the top by eight diamonds and surmounted by tassel Gules. The whole surrounded by the collar ﻿of the Order of the Veldin and supported by two ﻿﻿﻿horses Sable rampant.

Abdes de Savin - The First King of Santegia. He's the current patriarch of House de Savin. He took over when his brother was deemed missing and presumed dead. He acts as the Lord Ambassador of Santegia.

Leoiarizaltzu de Savin - The Second and Current King of Santegia.

Daedalus Taitale - Has been with Abdes since the founding of the Duchy of Savinia. Former Duke regent of Savinia and High-Chancellor of Savinia. Architect of the Veldin palace. Great friend of House de Savin.

Elias de Castro - He's the current patriarch of House de Castro. Rebelled with Abdes de Savin against the reign of Oren over the region and helped establish the Kingdom of Santegia. Grand Knight of Santegia.

Romanos Palaiologos - The First Grand Justiciar of Santegia. He was the current patriarch of House Palaiologos.

Gonzalo De Castro - A war hero and the Second High Steward of Santegia.