The Duchy of Savinia was a vassal state of the Holy Orenian Empire, previously being under the Kingdom of Courland prior to its dissolution in 1615. It was the ducal seat of the House de Savin, with the most recent reigning Duke being Abdes de Savin. The Duchy bordered the Principality of Evreux to the west and the Sultanate of Haria to the north. To the east lay the Bay of Biscay, beyond which was the sea of Axios.

Savinia was established by two brothers, Allaudin de Savin and Abdes de Savin as small yeomans under the Archduchy of Lorraine during the 1560s, prior to the collapse of the fifth Holy Orenian Empire from the Eagle's Rebellion. During this time they expanded by securing the peerage of barons and through the accumulation of levymen. After the subsequent establishment of the Kingdom of Courland, the Barons were granted ducal land under oaths of fealty, thereby establishing the current Duchy of Savinia. This controversial act was followed by a period of increased tension between the Kingdom of Courland and the Kingdom of Lorraine-Savoy. The de Savin currently reside in the Veldin Palace. 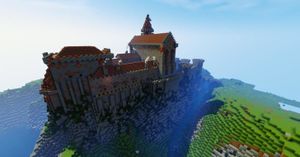 Apart from the natural beauty of its lands, the Duchy served as a commercial and strategic base for the Principality of Evreux. Located due east of the Courlandic capital, Aleksandria, and bordering the Sultanate of Haria, it provided the capital's only access to the sea of Axios. As such there were a vast number of opportunities for commerce as well as for those who aspired to serve the Duchy and the crown.

The Duchy itself was composed of various marches, the most important of which is the march of Ponzan, within which lay the town of Castell, a quaint settlement that provided various goods and services to entrepreneurs and visionaries. A fort belonging to a mercenary group, The Mark, lay within the march of Seville along the southern borders of the Duchy.

The Veldin Palace lay on a river island sandwiched between the march of Ponzan and the march of Seville, overlooking the bay of Biscay to the east. The most notable feature of the palace was its sheer size, containing over fifty rooms and halls, a central quadrangle, and an enclosure for the barracks of the Savinian Brigade. In addition, its abodes were adorned with vibrant murals, and housed the House of de Savin and the ducal court.

The immense structure was built upon the old ruins of Vilachia, of the defunct Principality of the Dreadlands, and the mysterious artifact of the Veldin - of which the Order of the Veldin is sworn to protect - to which stood as a monument to all cultures and heritages, to the protection of the Duchy, and to the crown of Courland.

Members of the court were representatives of the Duchy and its people, given the responsibilities and powers to administer the Duchy on the Duke’s behalf; although any and all legal motions made had to still be passed through the Duke, or regent if circumstances permitted such an arrangement, who had the right to veto any decisions made. Although members were not bound to the peerage of the Duchy, and were not limited to race or gender, each member was a specialist with extensive knowledge and experience in their relevant fields.

Duke of Savinia The highest hereditary title provided by the crown of Courland, one which was analogous to the patriarch of House de Savin, sovereign of the Duchy and protector of its people. The title therefore granted upon the bearer the full responsibility for the Duchy, its laws and its inhabitants, as well as high power regarding motions and actions carried for the Duchy.

The most recent Duke of Savinia was: His Grace, Abdes de Savin, GKV, SE, Duke of Savinia, Count of Veldin, Field Marshal of the Savinian Brigade, Lord Ambassador and Grand Justiciar of the Kingdom of Courland.

High Chancellor The most senior minister of the ducal court, apart from the Duke himself, whose position allowed them to exercise the commands and wishes of the Duke; thereby acting on their behalf. This position could be elevated to regent in circumstances when the Duke was absent or unfit, thus granting the bearer powers and responsibilities equal to that of the Duke as to administer the Duchy on their behalf.

The most recent High Chancellor Of Savinia was: His Excellency, Daedalus Taitale, CM, KV, OE, Duke Regent of Savinia.

High Treasurer Responsible for the ducal treasury, the bearer of this title was accountable for the management and acquirement of finances within the Duchy whether it be monetary property, inventory or any other physical assets. The High Treasurer was not expected to have great wealth, but had to be well versed in trade and productions, in order to carry physical duties if the circumstances see fit to do so.

The most recent High Treasurer of Savinia was: Vacant

High Scrivener Tantamount to the role of a privy seal, the High Scrivener was responsible for the engenderment of official ducal documents for the Duke and the court. In addition to handling the creation of such documents, the bearer was also to maintain administrative records and those regarding peerage within the Duchy. As such, the High Scrivener was expected to be experienced and well equipped in both the capacity to indite and interpret.

The most recent High Scrivener of Savinia was: Varen'thal Ilmoriel, CM.

The current High Mage of Savinia is: Filanir Ilmoriel, CM.

Abdes de Savin - The duke of Savinia. He was the patriarch of the House de Savin. He took over when his brother was deemed missing and presumed dead.

Allaudin de Savin - One of the original founders of the house, and the first patriarch of the House de Savin. He was the Baron of Savinia, until he went missing and his brother Abdes took over. Klaus I and Loic I are the only offspring that he was sought to have.

Sarah de Savin - The late wife of the also late Allaudin de Savin, and the mother of Klaus I, and Loic I de Savin.

Klaus de Savin - The nephew of Abdes de Savin, the son of the late Allaudin and Sarah de Savin, and brother of the missing Loic I de Savin.

Loic I de Savin - The nephew of Abdes de Savin, the son of Allaudin and Sarah de Savin, the brother of Klaus I de Savin. He was also the Deputy Maer of the City of Aleksandria. He's deemed missing and presumed dead.

Amelia de Savin - The only daughter of Duke Abdes de Savin, the cousin of Klaus I, and the niece of Allaudin de Savin She's also the sister of Hefron and Amar de Savin.

Hefron de Savin - The son of Abdes de Savin, the brother of Amar and Amelia de Savin, and the nephew of Allaudin de Savin and cousin to Klaus I as-well as Loic I.

Amar de Savin - The son of Abdes de Savin, the brother of Hefron and Amelia de Savin, also the nephew of Allaudin de Savin and cousin to Klaus I as-well as Loic I.