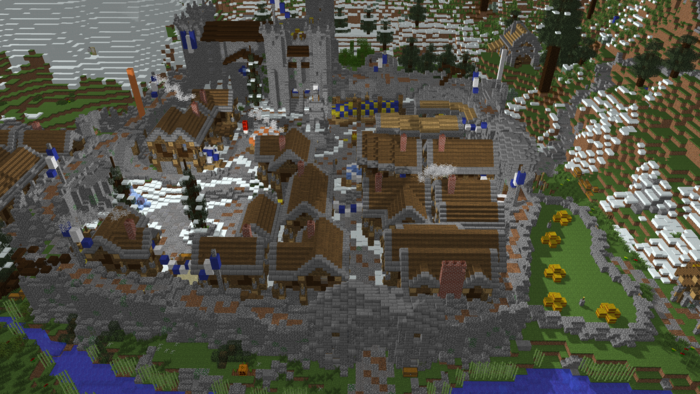 "New Jornheim, the first Capital of the Kingdom of Kaz'Ulrah in Axios, circa 1629"

New Jornheim was the first capital of the Kingdom of Kaz'Ulrah in Axios, and was located in the North-Eastern section of Tahn, surrounded by three mountains on all sides but one. It was named after the first Frostbeard home in Aegis, now known as Old Jornheim. It could be reached by taking the blue-white wool cart located in the cart hub by Adelburg. 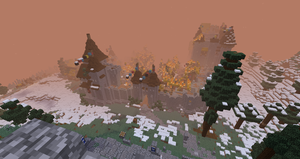 The city of Vsevograd burning, as seen from the hold of Jornheim
The land upon which New Jornheim was built had in the past been home to many different humans. In the early days of Grand King Algoda Frostbeard, the land was owned by the human Kingdom of Haense and was the location of St. Karlsburg, the human capital of the North. Upon the fall of Haense at the hands of Courlandic and Frostbeard warriors, the lands of Haense were split among the victors, with most of it going to Courland and the Grand Kingdom of Urguan receiving a single parcel of land. Among the damage was St. Karlsburg which was burnt to the ground. When the Frostbeards decided to officially leave the Grand Kingdom of Urguan under the reign of Grand King Bastion Ireheart, they journeyed north to the town of Vsevograd which had been built upon the ruins of St. Karlsburg. Here the Frostbeards found a friend in ruler of Vsevograd, Ostromir Kovachev. He offered them a hold in the mountain in exchange for their aide in war should Vsevograd ever be assaulted. The Frostbeards accepted and set about construction the Hold of Jornheim. Whilst living in Jornheim, a dragon assaulted Vsevograd and burnt the city to the ground, it's keep and walls being the only things that remained structurally sound.

Despite the dragon attack on Vsevograd, the Frostbeards remained firmly settled in their mountain hold of Jornheim and enjoyed relative peace. Whilst digging deep into the mountain to construct his brewery, Azaghal Frostbeard, son of Kerwyr Frostbeard, broke into a spider liar, which let out an army of spiders into Jornheim. Wave after wave of spiders poured out the hole, despite the Frostbeards best attempts to contain the beasts within their hole. After hours of restless fighting, the Frostbeards and their allies lost the Battle of the Brewery and were forced to concede Jornheim to the overwhelming spider army. Tired, homeless and angry, the remaining Frostbeards set up camp within the walls of a burnt out Vsevograd and set about clearing the grounds to set up a new home.

After an initial camp had been established, Clan Lord Garrond Frostbeard assigned builders Azaghal and Edel Frostbeard to repair the walls of the ruined town. Within a few weeks, the walls were repaired, all the debris of Vsevograd was removed, and it was time to start construction. Unfortunately, differing visions of how the town should be built led to intense arguments between the two builders, resulting in Azaghal stepping aside, and Edel taking official control of construction. Unfortunately, Edel's building pace was not satisfactory, and so the newly arrived Hamnil Frostbeard was appointed head builder by Garrond, resulting in the town being finished in just under a year. In it's original iteration, the town featured one main boulevard alongside three streets, with a town square featuring a statue of the legendary Frostbeard, Gorum Frostbeard.

After the initial surge, the leadership of New Jornheim realized that there was not enough housing for all the citizens and Azaghal Frostbeard was tasked with constructing farm houses and a home for the lumberjacks of New Jornheim. Within half a year, both the farmers and lumberjacks of New Jornheim were comfortably settled in their new homes, and were producing incredible amounts of food and wood. It was around this time that Azaghal mysteriously disappeared, and was replaced by Hamnil Frostbeard as Warden of New Jornheim. Realizing that the farm houses and lumberjack homes were not enough, newly appointed Clan Lord Verthaik II Frostbeard had Hamnil expanded towards the west, adding on an additional section to the city. It featured two clan halls, one for the Blackaxe clan and one for the Goldhand clan. Alongside that, it also had the newly created Architect Guild's base of operations.

New Jornheim's tavern is one of the most visited locations in the town. Run by Balder Frostbeard and his bartenders, it provides the citizens with an excellent selection of alcoholic and non-alcoholic beverages. Alongside this, one of the best cooks in all of Axios, Thomas Brandybuck cooks for this tavern which he assisted in building. His menu consists of meats, fish and pastries. 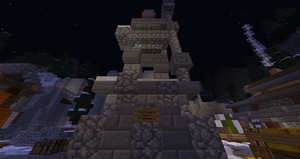 Statue of Frostbeard Clan Legend Gorum, as seen from the town square of New Jornheim
New Jornheim's town square features a statue of Frostbeard Clan legend Gorum Frostbeard built by the equally famous human architect Danis Silverblade. Made to honor the great things that Gorum has done throughout his life, the statue is made of finest stone,chiseled by the finest stonemason and mined in the best mines, by the best miners that the Kingdom of Kaz'Ulrah has to offer. It dominates the square, which otherwise features an auctioneer, a banker, multiple shops and the entrance to various other sections of the city.

The Training grounds are located off the street of Liam Frostbeard and feature a large open space for citizens and soldiers to converse alike. In the upper center of the clearing there is a small sand pit which is often used by the regulars for brawling and perfecting their combat skill. Near the pit is the mess hall, featuring a new design that incorporates multiple seats and lots of open air for the soldiers and guards to breathe.

The Architect Guild's Head Quarters are located in the new section of the city, at the end of Liam Frostbeard's street. It features a wide open space for architects to gather and discuss ideas, and then two offices for the two senior Architects, Edel Silvervein and Hamnil Frostbeard, the co-founders of the Guild.