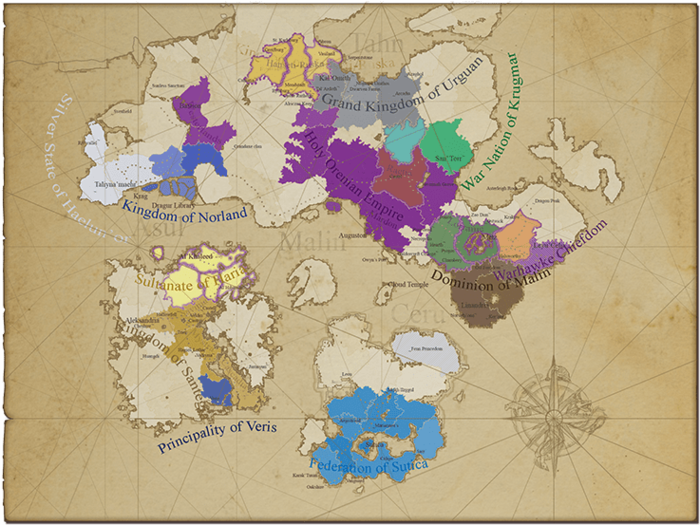 Axios consists of three major islands, Tahn, Asul and Ceru. Large ancient ruins can be spotted across the islands, being the remnants of previous colonisers.

Asul has been host to much of the conflict in Axios, being once the home of the War Uzg and the Dreadlands before their conquest by the Holy Orenian Empire. After the dissolution of the Holy Orenian Empire, the Kingdom of Courland seized the empire's old land on Asul. It now hosts two independent nations: The Kingdom of Courland and The Sultanate of Haria.

Of the three islands, Ceru is the least diverse with ice and snow to the north, and thick forests to the south. The Federation of Sutica is the only nation that occupies this island, coupled with its wealth it has allowed them to expand rapidly over the near entirety of the island. In the northern mountains of Ceru lies the palace belonging to the Princedom of Fenn.

1576: The conquest and dissolution of the Dreadlands by the Holy Orenian Empire.

1578: Coronation of King Peter I of the Kingdom of Hanseti-Ruska, a vassal of the Holy Orenian Empire.

1581: The conquest and subjugation of the War Uzg by the Holy Orenian Empire at the Siege of San'Kharak.

1582: On the 8th of The Grand Harvest, Torvin Grandaxe was crowned King of the Grand Kingdom of Urguan.

1585: The Year of Four Emperors, which saw the consecutive assassinations of John III, John IV, and the abdication of Robert II, with the crown finally resting on Philip I.

1593: The formation of the Coalition against the Holy Orenian Empire, fronted by the Kingdom of Courland.

1593: Grand King Algoda Frostbeard is captured by the Holy Orenian Empire. After brief interrogation, he was then swiftly executed by Philip I giving birth to the famous last words, "This changes nothing".

1594: On the 15th of The Sun's Smile, the signing of the Pax Occidenti and the Grayspine Concord occurred. Marking the release of the Westerlands and the Kingdom of Hanseti-Ruska, from the Holy Orenian Empire.

1595: Dissolution of the Holy Orenian Empire.

1600: Prince Meric Staunton of Courland is assassinated on the streets of St. Karlsburg. The Kingdom of Haense successfully sieges the keep of the House of Brawm in an infamous assault known as The Siege of Houndsden.

1609 Holy Orenian Empire is reformed with Mardon as it's capital.

1609 The Westerlandic city of Bastion falls to the undead forces of Mordring, the area around it becoming heavily tainted.

1610-1611 The dwarven forces of the Grand Kingdom of Urguan besiege the Kingdom of Norland in what will be known as the first and second siege of the Krag. The people of Norland ultimately repel the dwarves with the aid of Dunamis mercenaries, resulting in a white peace between the two kingdoms.

1615: Mordring's forces abruptly withdraw back into the portal of the Abyss, and destroy the portal, cutting off their connection with the West. Axios is free of the their threat for a time. The Kingdom of Courland is dissolved into the Principality of Evreux by Joseph Staunton I after mounting Orenian pressure.

1617: A rebellion breaks out in the Courlandic houses of de Savin and de Castro, a skirmish occurs in the fields of Asul, resulting in an overwhelming victory for the forces of the rebellion. A coalition is also formed between the War Nation of Krugmar, Grand Kingdom of Urguan and the Kingdom of Norland to fight the Orenians.

1619: A successful siege by the coalition on the County of Trier puts them one step closer to sieging Aleksandria.

1620: A peace treaty is signed between Oren and the Coalition, with Oren giving up all their lands on Asul to the Kingdom of Santegia

1636: The Grand Kingdom of Urguan is dissolved and conquered by the coalition forces of the Kingdom of Kaz'Ulrah, Kingdom of Norland, the Warnation of Krugmar, the Kingdom of Santegia, and the Chiefdom of the Warhawkes.

1637. A group led by Canonius I attempts to take control of the Holy Orenian Empire, leading to the death of Emperor John VI. This leads to several months of fighting before Canonius finally is inducted as the King of Renatus, with the land of the Oren's capital going to the newly reformed Kingdom of Renatus.

1638 Norland attacks the Holy Orenian Empire and the Kingdom of Hanseti-Ruska, in what is known as the Battle of the Bloody Road which ends in a decisive Norland victory.

1640 The Kingdoms of Renatus, Marna and Hanseti-Ruska along with their Allies launch a campaign against Norland called the Third Crusade. The battle that follows is known as the Battle of Rochdale and ends with Crusader Victory.

1641 The allied Kingdoms continue their push against Norland and engage them in one final battle known as the Siege of Vjorhelm, resulting in an overwhelming Crusader victory. The city of Vjorhelm is sacked and razed to the ground.

Nature of the Realm

Official Nations of The Isles of Axios

Cities and Settlements ' (Capitals of major nations are marked in bold, while ruined towns are italicized.)