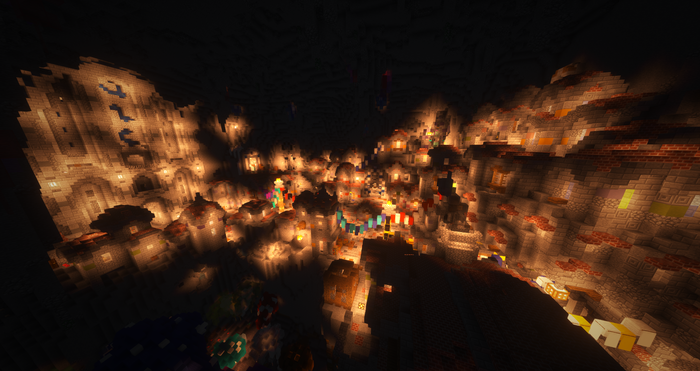 "Kal'Tarak, Capital of the Kingdom of Kaz'Ulrah in Atlas, circa 1644"

Kal'Tarak was the capital of the Dwarven nation, Kaz'Ulrah. It was situated at the end of Garrond's Vale and was designed by Morug and Hamnil Frostbeard. It featured a shimmering river and waterfall with a mushroom forest that grew on the bottom of the cave. The upper portion was where the majority of the populace resided. Kal'Tarak means City of Unity and is symbolic of the new unity that had been founded among the Dwarven people following the creation of the Kingdom of Kaz'Ulrah.

Upon landing on the continent of Atlas in 1642, the Dwarves set out to construct a city worthy of the name Kaz'Ulrah. They located a valley and named it Garrond's Vale, after the Clan Lord of the Frostbeard Clan and founder of the Kingdom of Kaz'Ulrah; Garrond Frostbeard. After exploring Garrond's Vale, they found a cave in the very back of the valley. The cave was vast and had an upper portion and a larger lower portion which was split by a shimmering river who's source lied deep within the mountain. On either side of the river was a vast mushroom forest which provided natural protection for the various animals that lived down there. After some investigation it was decided by Morug and Hamnil that the upper portion was most suitable for a city and construction began immediately. With the entire Dwarven nation at work, the city was completed in two short years, officially opening it's gates in 1642. It featured an array of defenses at the gate to deter raiders, and a main street which ran all the way through to the King's palace. The first part of the city was full of shops and a tavern, while the rest of it was dedicated to mainly homes.

Immediately after the construction of the city, it's population swelled with Dwarves and other races alike. Being one of the first capitals to complete construction, Kal'Tarak was at a distinct advantage citizen wise. It's apartment sector filled up within the week, and the small tax of ten iron ingots made the housing affordable. At the same time, the large quantity of citizens helped quickly fill the coffers of Kaz'Ulrah as the ten iron ingots added up. Settlements from across Atlas visited Kal'Tarak and requested to recieve protection from the army of Kaz'Ulrah who was strongest in Kal'Tarak. It was not uncommon to find Folkmen patrolling the streets and coming and going on various missions across the growing nation of Kaz'Ulrah. Notable settlements and Kingdoms that came to Kal'Tarak to ask for Kaz'Ulrah's protection include; Veris, Arbor, Azeron and Southwood among many others. A work force was established and went to work quickly excavating the mines and farming the field. Workers would often be seen lining up at Psycho Strongbrow's desk with their quotas, ready to be paid for their hard work.

Following the murder of High King Verthaik II Frostbeard by a Renatus agent, the Kingdom was temporarily in disarray as there was not a heir to succeed Verthaik. However, upon the discovery of his body at the foot of the stairs in his palace chambers, a final will was found. In his will Verthaik requested that democracy be instated in Kaz'Ulrah as he believed that the only way foreward for Dwarves was through democracy as it had been done in the past. As a result, a vote was held by Verthaik II's close adviser and family friend - Morug oz Brathmordakin. After a week of voting, Bogdun Goldhand, another one of Verthaik's close friends and advisers was elected to be the second High King of Kaz'Ulrah.

Kal'Tarak was the capital of the Kingdom of Kaz'Ulrah, the primary Dwarven nation. It was ruled by the High King, but the majority of the management work was done by the King's Council as the city was the capital. Most of the work around the city was handled by the King's Hand and the High Warden who ensured that the city was running smoothly. Religion and all issues surrounding it were handled by the High Prelate. Defending the city and raising the army in times of war was handled by the Grand Marshal, while negotiating peace and relations with other nations and settlements was the task of the High Ambassador. The High Remembrancer was tasked with overseeing the various scholar projects and was in charge of the library making sure that knowledge was given to all. Master of coin kept an up to date track of the income in the kingdom and lastly the sheriff was tasked with maintaining order. 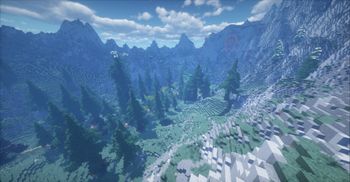 The valley in front of Kal'Tarak was known as Garrond's Vale, named after the famed founder of Kaz'Ulrah; Garrond Frostbeard. It was full of towering evergreen trees, appearing to rival the height of the mountains when one walked down the road. Around halfway through the valley, one could see the golden fields of wheat which were used to feed the ever growing Kaz'Ulrah population. A river who's source was located in the mountainside streamed down, and then forked off by the fallen tree crossing. Kal'Tarak was located in a natural cave at the end of Garrond's Vale. It featured a cliff and then a steep fall down into a lush mushroom forest which was split in half by a glimmering river, with it's source deep within the mountains. Beyond the river was a vast opening into the ocean that surrounded the continent of Atlas. Naturally forming stalactites dotted the ceiling of the cave and the cave walls were composed of diorite and smooth stone. 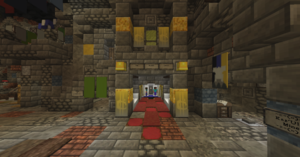 The entrance to the Mamba Casino.

The King's Palace was located in the very back of the city. It was a three story building that housed the High King and Queen, alongside the High Ambassador. The first story was the location of the feast hall and the Frozen Hall, alongside the Embassy Suites and the High Ambassador's office. The second story was where the King's Council gathered and where the majority of diplomacy was finalized. The third story was the High King and Queen's quarters where they lived and spent their private time.

The Mamba Casino was located in the commercial district of the city and was ran by Tito el Bambino and his gang of dwarves. People from across Atlas travelled far and wide to come to the Mamba Casino and try to make it big. Few succeeded, but those who did were usually set for the rest of their lives.