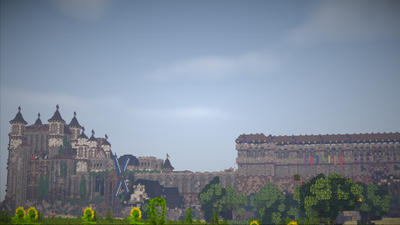 Johannesburg (High Imperial: Johannae Vindelicorum) was the capital city of the Holy Orenian Empire. It was founded in 1571 after the Imperial landing upon Axios by Emperor John III and dedicated to his grandfather, John I. Following its founding, Johannesburg was once the largest human city within Axios (if not, the largest city in all of Axios) and served as the central hub of the Imperial government as well as the location of the Palace of Saint Adrian, the residence of the reigning Holy Orenian Emperor. After the loss of the Orenian-Coalition war in 1595, the late Emperor Philip I used innumerable thanhium bombs located below the palace to destroy the entire city and some of the nearby terrain. 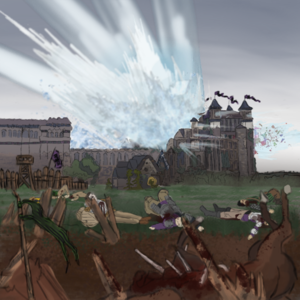 Johannesburg near the end of the Coalition War

Johannesburg was constructed by the order of Emperor John III after the Imperial landing upon Axios in 1571. Since then the city has seen many changes. Under the watchful eye of city administration, Johannesburg expanded its housing district with the creation of lower-class abodes along the moat surrounding the city walls. A new arch now stands before the bridge into the city, newly dedicated to the rule of Emperor John III. What once stood tall and proud as the city's main bank and marketplace was demolished near the end of John III's reign, and rebuilt into what is now known as "burning place". This new location is larger and houses numerous stores, an auctioneer and a newly constructed bank for the city.

Shortly after the first great loss of the Orenian-Coalition war, the city saw plenty of changes. Under the watchful eye of Philip I, the city was outfitted with a series of defenses for any presumed future raids or sieges on the city. First and foremost the back gate of the city was completely sealed, and a small stone building stood on the outside of the gate to ward off any who sought to enter, next came the addition of great barrier walls at the upper district for the purpose of securing the safety of the nobility and gentry, only those of importance received keys to access the doors that bypassed these walls. Next came numerous defensive constructs along the main roadways of the city, to protect foot soldiers from incoming arrows, and to block the advancement of incoming forces. Yet all of this proved useless with the Orenian surrender and the great cataclysmic event that brought the entire city to ruin.

Surrounded by those he loved, deep within the caverns of the Imperial Palace, using a gargantuan stockpile of thanhium bombs, the late Philip I destroyed the entire city to prevent his enemies from seizing the place he knew and loved, taking it all with him into the afterlife.

Intended to mark the celebration of Saint Edmond's Day, the Grand Ball of 1574 was held within the Palace of Saint Adrian by the order of Emperor John III.

Coronation of Philip I

Johannesburg is located within the heart of the Valley of the Emperors, known most aptly as the Breadbasket of the Empire. Surrounding the grand city lay vast and open plains, sparsely and vastly forested areas, and a marshland that stands as the former home to the Duchy of Savoy prior to the great Courland revolt.