From Lord of the Craft
(Redirected from Mountain Dwarf)
Jump to: navigation, search

Mountain Dwarves, Agnarum Dwedmar in the dwarven language, are a traditionally strong and hardy form of Dwarf which calls the vast mountain ranges of the world home. They often create sprawling mountain fortresses and cities that loom over the world beneath. For a Mountain Dwarf, the fresh air of a mountain summit is the smell of home, and the snow from the thin-aired heights a welcoming sign of hospitality. Mountain Dwarves prefer an axe in hand over hammer or sword and find that mining is not something that comes easily to them, preferring to be in the skies rather than the ground. 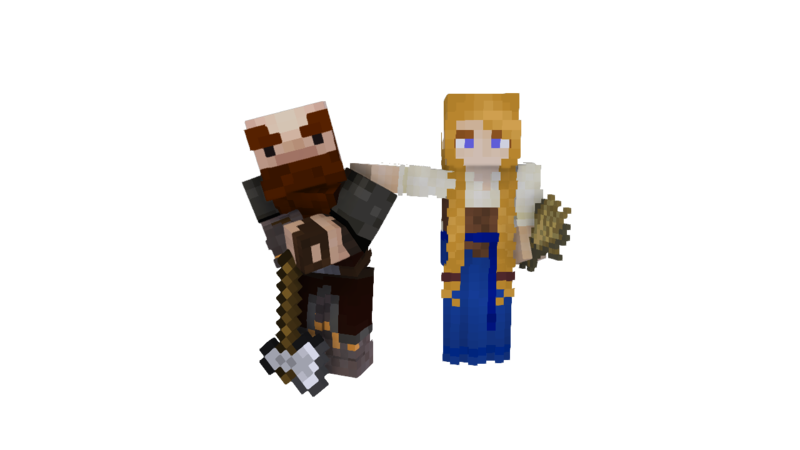 The skin of the Mountain Dwarves is generally pale in some sense. Some are tanned from exposure to the sun, while others are more pale from living high up on mountains. However, compared to the other Dwarven subraces, the Mountain Dwarves lean very firmly towards pale and pink skin.

The Mountain Dwarves have some variety in eye color, all of which being relatively common. These colors include green, brown, and blue. These are generally the only Mountain Dwarf eye colors, and others tend to denote mixed ancestry with other subraces.

Much like with other dwarves, mountain accent is often an for other races to understand, even if they are talking in common. They are usually unable to fully say the letter -h in words and tend to sound like a person with a scottish accent. It may seem difficult to understand a dwarf at first, but it is just slightly modified Common tongue. Although mountain dwarves do not understand the way of the stone or trees like the cave dwarves or forest dwarves, their skill at nature knowledge is only matched by druids, wood elves or humans that have lived their short lives in mountain ranges. And this is not nature in the same way Forest dwarves know the way of the common forests. We are talking about the wild nature of the mountains common folk doesn’t dare to touch when night falls.Yet these dwed are fearless enough to roam these woods once an adventure is afoot.

Mountain dwarves develop at the same rate as humans do, but they tend to live up to seven hundred years more than humans, sometimes even longer than that depending on the dwarf. Before dwarves live through their first fifty years, they are often referred to as Beardlings, though this may differ from the achievements of a dwarf in young age or if the dwarf is new to the community (In which case, a dwarf maybe 300 years old but he could still be referred to as a beardling by some dwarves that maybe even younger than him). Although they live for centuries, you can’t find an elder dwarf in every corner. Many dwarves die due to mining accidents or during his work. It is also important to note that after six hundred years, a dwarf may start feeling weak under the pressure of his years, making him less capable with physical work. This, of course, does not weaken his mind, but rather makes it sharper.

Mountain dwarves are most common subjects to the Grand King of Urguan, and follow his lead in life and battle. In fact, many kings in the past were mountain dwarves, so it is not hard to understand the alliance between Kingdom of Urguan and mountain dwarf kin.

Other important aspects of dwarven life, especially between mountain dwarves, are the clans. A dwarf may backstab you to satisfy his greed or even start a war due to his stone hard honor, but he is not a real dwarf if he doesn’t honor his family, and clans are the solemn proof of that. Unless his honor is tested by the clans injustice, a dwarf will follow his clansmen into glory and death.

Art in mountain dwarf settlement is interesting, as most of them don't portray it via paintings or bronze engravings, but via sculptures and architect wonders. Although not as fine in their arts as the cave dwarves, mountain dwarves still have some of the greatest kingdom wonders of the realm, as some of their statues are monoliths of the dwarven culture.

This of course, does not mean that dwarves don't appreciate paintings, but their culture is more closely connected with stone and in stone, they excel, no matter the if cave or a mountain dwarf create art with it. One other important aspect of art in dwarven eyes are relics. Although not designed for showcase as sculptures or paintings, relics that are rich in history and lore are more precious to a dwarf than a statue.

Mountain dwarves at first may seem like a race that doesn't care about literature, but you'd be mistaken. True, they might not have libraries as High elfs, but their tales are told in a different way. Similar to orcs, but with less of a chance of getting smashed in the head to prove your honor (This, of course, does not mean that such occasions wouldn't happen, as it can be seen with Irehearts). The dwarven campfire stories are probably some of the grandest parts of adventures you can have with a mountain dwarf. These are not some spooky scary skeleton stories, but actual epic tales of past dwarven heroes. Some of them are even written down in history. Such as The Tale of Ondnarch, whilst others are just carried over from father to son, such as clan tales.

Dwarven instruments are known to be loud and harmonic at the same time, making their stories only more epic. Instruments such as bagpipes and drums are common because of that, but one other instrument that breaks that standard is the bards wonder, the lute. Dwarven skill with the lute is unremarkable and many bards in our realm have actually been dwarves.

As for the singing, dwarves have a tendency at singing all in once in harmony. Most of these happen either at the end of royal events, such as crownings, or at the start of wars, before battles or skirmishes. If you ally with dwarves, there is a chance you will hear the centuries-old songs of an unknown author which most dwarves know by heart and sing before battle known only as "Umgoroki Umgoroki Undor"

Most dwarves are pious followers of The Brathmordakin, the dwarven faith that praises Urguan and his grand followers. They pray to their separate deities in everyday life, but they believe the hand of their deity is guiding them in battles. Some of them are even vivid members of The Dwarven Clergy to fulfil their spiritual emptiness even more.