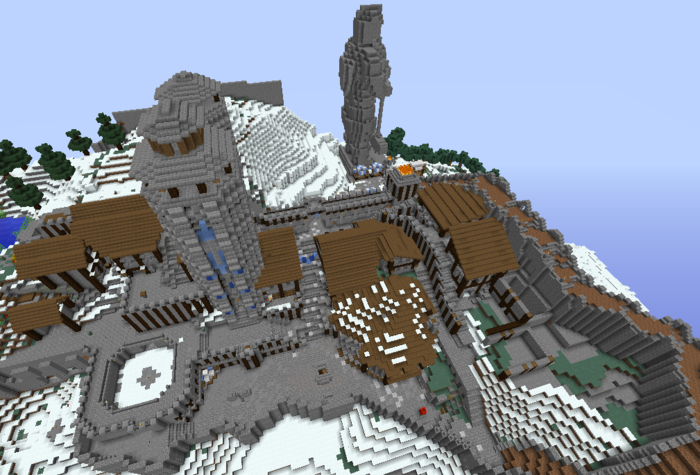 Established in the early days of Vailor in the region of Khor'Azwyrtrumm (Dwarvish: Land of the Frostbeards), Tal'Azwyr (Dwarvish: Frost Hold) was a formidable city, known throughout the Grand Kingdom for it's great Thanium mines,large reserves of ferrum and it's architect, the famed Dun Irongut. It's original inhabitants were mostly made up of Frostbeards, but as word got around, Tal'Azwyr became home to many dwarves. It continued to increase in population until 1518 when the Mountain Monarchy was founded. leading to the departure of some who felt more loyal to the Grand Kingdom, than their home. After the Battle of the Mountains, and the end of the Civil War, Tal'Azwyr was taken over by some lesser dwarves who continued to lead it, until it's ultimate destruction at the ends of Uldar Irongut, sometime later. 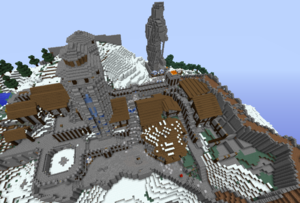 Tal'Azwyr, capital of the Mountain Monarchy and home to the Frostbeard Clan. In the upper right the statue of Kaz'Ulrah, the first Frostbeard, is clearly visible. In the center is the Frost-Tower, which rose up above the entrance to the Clan Hall.

As the dwarves landed onto Vailor, many headed towards the location of Kal'Akash, but the Frostbeards headed towards the formidable Kazulran mountains, their towering snow covered tops visible many many miles away. As they reached some white top, they settled down, huddling up for warmth against the brisk mountain breeze. Days past, and they slowly built up a sort of temporary outpost atop the mountain, consisting of many chests and some shelter in a nearby cave. One day, Dorlin Frostbeard began exploring the cave, going deeper and deeper, until an ancient spirit was awoken. It began attacking the Frostbeards, and a ferocious battle erupted. After many hours of combat, the spirit had been slain, it's blade retrieved as a relic, and the cave secured and designated as the location of the clan hall, later to become the center of Tal'Azwyr.

Work on the town slowly progressed, and really only centered around the construction of a wall, the clan hall and a road, created by Varuk Frostbeard. This road, named the 'Frostobahn' was Varuk's greatest achievement in life, and he often spoke fondly about it to any who would listen. It connected the main road with the road to Tal'Azwyr and featured comical signs along the way, meant to keep the walk interesting. Sometime passed, and Dun Irongut showed up and showed the Frostbeard leaders a plan for the city. Excited by Dun's ingenuity, they quickly gathered the clan's members and a large group began constructing the city. The city was finished within a matter of stone days, and visitors began coming more and more often. Business was good and the Frostbeards were happy, their morale heightened even more when the elections came about, and Verthaik finally had a chance to be elected Grand King.

The election lasted a few horrible days, as much figurative mud was slung between candidates and their supporters, and perhaps some literal as well! At the end of the voting period, Skippy Irongut came out on top with four extra votes. Verthaik responded explosivley, accusing the counting committee of removing too many of his votes, and quickly declared the independence of the Khor'Azwyrtrumm region, including the Blackfist keep of Kal'Krest and the Frostbeard town of Tal'Azwyr which would serve as the capital of the new Mountain Monarchy. Naming himself King in the Mountain, Verthaik quickly moved to fortify Tal'Azwyr, and militarize it's populace, arming them with the proper means to protect themselves from the Legion. Within days of the announcement the first assembly of soldiers left Tal'Azwyr and struck Kal'Akash, striking down many of the dwarves within the city who were not expecting such a bold move so soon. The shock howeever, quickly wore off as the Legion mounted their own counter raid. The war dragged on like so, with both sides raiding each other, causing a severe decline of citizens in Tal'Azwyr that were not of Frostbeard lineage. The Battle of the Mountains, occuring at a junction in the road to Kal'Akash sealed the cities fate however. The defeat of Verthaik's forces destroyed the Mountain Monarchy, and led to Tal'Azwyr being taken over by some unknown Frostbeard. The city was lead by this person for some time, until Grand King Uldar Irongut destroyed it, some time afterwards.

Today Tal'Azwyr is buried in the snow, but perhaps one day it shall rise again in a different form...