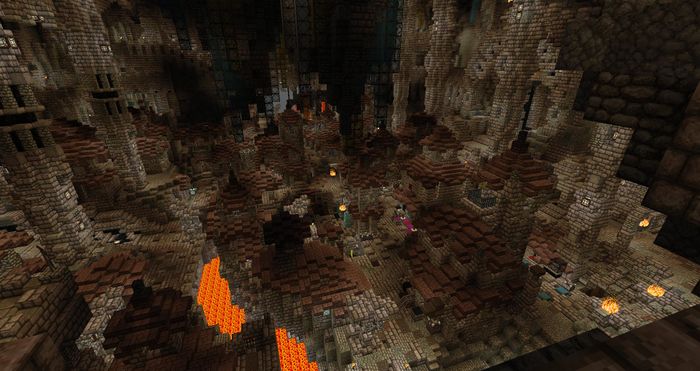 "Kal'Omith, when it was capital of the Grand Kingdom of Urguan circa 1608"

Kal'Omith was the capital city of the Grand Kingdom of Urguan, located beneath the mountains of northern Tahn. It was on of the most populous and prosperous Dwarven cities, many citizens within the city being among the richest in Axios. It was founded by an ambitious team of Dwarves seeking to revitalize Dwarven culture, led by Grand King Algoda Frostbeard. The city itself was built above a large system of caves, passages and ruins known as the Deep roads. The plans utilized to construct the city were discovered in Grand King Omithiel Strongbrow's tomb, the city was named in his honour.

After the deeming of the previous city of Kal'Nikaer as being poorly designed, Grand King Algoda Frostbeard commissioned the city of Kal'Omith be built. The city took designs and knowledge from the Hall of Urguan and combined it with the architecture used by the Paragon of Building Omithiel Strongbrow, naming the city after him. The city served as the capital for the Grand Kingdom through Philip's War where the dwarves defended their lands against the Holy Orenian Empire. The first Grand King crowned in the city was Bastion Ireheart, who was elected and crowned after the execution of Algoda Frostbeard by the Orenian Emperor Philip Frederick Horen.

The Deeproads of Kal'Omith are largely unknown and uncharted however recent expeditions have uncovered vast amounts of goblin hordes living beneath.

Slaughter of the Senate

After the death of the Dwarven King Bastion Ireheart the Senate of Hammers, representatives of all clans who gather to appoint a Grand King of Urguan, convened to select a new Grand King after Bastion had been buried in the council chambers overlooking the cavernous throne room below. While the Senate was convening a sudden commotion was caused by Kerwyr Frostbeard, the Clan Father of the Frostbeard clan. Kerwyr and the gathered Frostbeards exerted that the old way of selecting a Grand King was outdated and wanted to unite the Kingdom in a new way with strengthened alliances and believed the Senate incapable. The rest of the gathered representatives resisted this until Hogarth Irongut slammed his hammer against Kerwyr's shield, leading to the Slaughter of the Senate that left the Senate of Hammers broken, and the Frostbeards in control of Kal'Omith while the Senate of Hammers retreated to the Grandaxe clan home of Tal’Azmar to begin a bloody Throne War.

Kal'Omith was located along the seaside road between the Haenseti-Ruskan Empire and the City of Arcadia, tucked carefully between two massive mountain ranges. To reach the city's gates one had to climb a series of long and not-so-steep stairways placed between two gargantuan states of dwarves holding forever-lit torches. The city's main gate was lavishly decorated, protected by a multiple-meter thick doorway sealed only when the city closed it's gates for foreign entry, or in times dangerous to the integrity of the capital. Across from the city gates sat the ocean, and a very narrow strip of beach. Few shrubs dotted the landscape, trees often in far-flung areas, however alongside the pathway leading to the gate, behind the states sat a small fir forest, brought to life to bring natural beauty to the city entryway.

For a more detailed introduction to Dwarven government, [1].

Kal'Omith housed clan halls for each clan whom took residence within the city.

The Legion of Urguan was the standing fighting force of the Grand Kingdom of Urguan. Existing since its inception in Aegis, it's primary function was the protection of the dwarves of Urguan and their allies from internal and external threats. The Legion prided itself on being a multiracial organization, as long as its recruits shared the same ideals and beliefs.