From Lord of the Craft
(Redirected from Cavern Dwarves)
Jump to: navigation, search

Cave dwarfs (Umgorum Dwedmar or Cave Dwarfs) are a subtype of dwarfs whose blood roots all the way from Urguan himself. Their prowess in mining and mineral research is legendary and well known, often proven by their cities, which are carved from the bellows of the mountain. Unlike Mountain Dwarves, Cave dwarfs are rarely trusting other races closely, and usually despise them or just work with them professionally. That doesn't make the un-social, as Cave Dwarves are just a spirited as their brethren, although they keep it within dwarfs and their clans. Many of these dwed are in the high positions of the Kingdom or in the depths of their grand mine, as they are not usually the ones going on adventures outside of the deep stone homes and mines they inhabit. Of course, this means that their tunnels and excavations below are even more glorious than some structures that elves or humans may build over centuries. 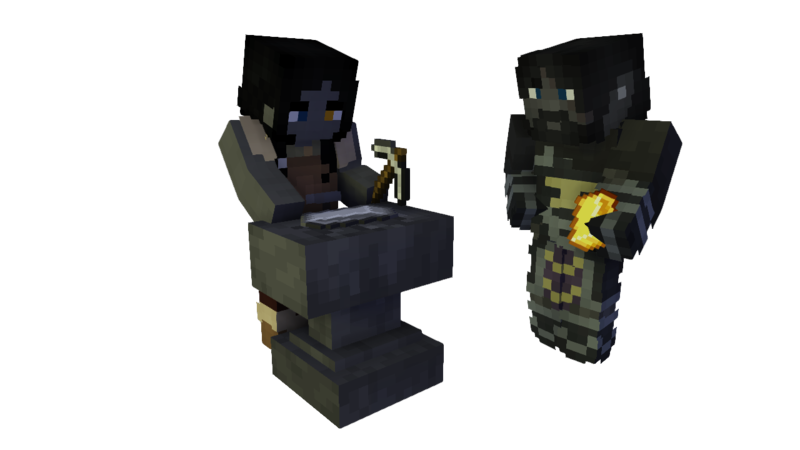 Cavern dwarves, compared to Mountain dwarfs, tend to be a bit shorter. That of course doesn't make them any less physically prepared than their brethren, as everyday life in the mines and similar jobs have made them even sturdier than some other races. One important difference from the rest of Dwed is their skin tone, which tends to be paler that usual. Oftentimes, their skin can be even grey, but is it due to their skin pigmentation or just some tradition involving coal, it is uncertain to everyone except close companions of them. Their hair also tends to be darker than usual, although some exceptions can be seen within some clans, such as Goldhands. They also tend to decorate themselves with rare gems and chunks of gold and silver in their beard and hair, proving their wealth and reputation.

Much like with other dwarfs, cavern accent is often an for other races to understand, even if they are talking in common. They are usually unable to fully say the letter -h in words, though less of a Scottish accent than the Mountain Dwarves and with more hard -k sounds, closer to the heart dialect of the dwed. It may seem difficult to understand a dwarf at first, but it is just slightly modified Common tongue. Cavern dwarves are especially agile in the mines, in such a manner that people believe that they use special techniques when traversing their mines. Whilst most of these are rumors, they still feel at home in the mines more than Forest or Mountain dwarfs.

Cavern dwarfs develop in the same rate as humans do, but they tend to live up to 700 years more than humans, sometimes even longer than that depending on the dwarf. Before dwarfs live through their first 100 years, they are often referred to as Beardlings, though this may differ from the achievements of a dwarf in young age or if the dwarf is new to the community (In which case, a dwarf may be 300 years old but he could still be referred to as a beardling by some dwarfs that may be even younger than him) Although they live for centuries, you can’t find a elder dwarf in every corner. Many dwarfs die due to mining accidents or during his work. It is also important to note that after 600 years, a dwarf may start feeling weak under the pressure of his years, making him less capable with physical work. This of course, does not weaken his mind, but rather makes it sharper.

Ibless had not only cursed sons of Urguan by turning them into a short, stout, and an ugly race, but has also enchanced their greed, which has costed them many precious lives and relics. This is especially shown among Cave dwarfs, as they work with precious ores and minerals daily, and guard then with more than their own lives. Luckily, the Creator has blessed the dwed with a strong heart, and a sturdy body, and a sharp mind. This blessing has turned dwarfs into a proud and a resistant race that has lasted centuries.

Cave dwarfs are most commonly subjects to the Grand King of Urguan, and follow his lead in life and politics. It's usually believed the the Cave dwarfs were the ones to start the today's way of politics and in fact, Cave dwarves are usually the ones with the inspiration to change them once change is needed.

For more info about the the inner structure of dwarven politics, please refer to the page about the Grand Kingdom of Urguan

Other important aspect of dwarven life, including the cave dwarves, are the clans. A dwarf may backstab you to satisfy his greed or even start a war due to his stone hard honor, but he is not a real dwarf if he doesn’t honor his family, and clans are the solemn proof of that. Unless his honor is tested by the clans injustice, a dwarf will follow his clansmen into glory and death.

Some clans that have mountain dwarf blood in them are: Irongut, Tunnelsmasher and Goldhand Another aspect of known by the other sub-races is the cave dwarfs affinity for knowledge and science. Many cavern dwarfs become craftsman, scholar or merchants, making the vast majority of these grey skinned dwarfs respected amongst the whole race.

Cavern Dwarves are renowned for their stone masonry and jewelship which is reflected within their art. Often, vast stone halls are carved underground with intricate patterns that run through the stone offering tales of dwed long gone or comfort and solace from the surface. It is also very common to see large stone statues of dwarven warriors or kings, which signify the nearing dwarven hold whether on the surface or underground. Within these dwarven cities are large portions dedicated to temples, smithies and merchant shops, where cavern dwarves sell their goods or offer these gifts to their gods crafted out of gold, silver and other precious ore and gems. This way of art has been observed within cave dwarven clothing as well, with beards being braided with jewels and their clothing decorated with gold.

brief description of the literature in this location

brief description of the music in this location

Most dwarves are pious followers of The Brathmordakin, the dwarven faith that praises Urguan and his grand followers. They pray to their seperate deities in everyday life, but they believe the hand of their deity is guiding them in battles. Some of them are even vivid members of The Dwarven Clergy to fulfill their spiritual emptiness even more.

Urguan and all of the Forgotten Dwarves (the first dwarves that walked) were cave dwarves. They'd first settled into the mountainsides of Aegis and would've tunneled within underneath at the mercy of the curse of Iblees.

Cave dwarves have tended to live alongside the Mountain Dwarves more often than not in regards to their cities, although they may be more comfortable further into the mountain.

This category contains only the following page.