Kingdom of the Westerlands

The Kingdom of the Westerlands was an independent, predominantly human nation located around the western part of Tahn encompassing a region known to the descendants simply as ‘The Westerlands' - a cold, mostly barren land, wild and untamed. The heart of the Kingdom was located in a thick boreal forest.

The Westerlands was released of its vows to the Holy Orenian Empire by Emperor Philip Frederick I on the 15th of Sun’s Smile, 1594 in the Pax Occidenti also known as “Peace of the Sun’s Smile”. Being former bannermen for the Emperor, their oaths were transferred to their former commander, now King, Leopold Francis I of House Horen. While the Westerlands was predominantly comprised of former Imperials from the destroyed Johannesburg, there was a large highlander population comprised of Waldenians and those of Kaedreni roots. Many of the more zealous of citizens referred to themselves as ‘Vanders’, followers of a code and ideology going far back to the Aegisian era among the Proto-Hansetian tribes.

Before the establishment of the Westerlands by the Holy Orenian Empire, much of the land was left uncharted and mostly ignored due to the mountain chain that cuts off the region from the rest of the Isle of Tahn. There are documents and proof of those who have attempted to establish settlements previously, the most notable being the forsaken ‘Hallowglade’ which was comprised of Vandorians from Johannesburg seeking to recreate a Vander society when the Kingdom of Vandoria was abandoned when the descendants left the Isles of Vailor for Axios.

Between 1581 and 1582, a little known tribe of goblins accompanied by other goblins without a home began to refer to themselves collectively as “The Naragoshuk” and ventured to the Westerlands after the fall of San’Kharak. In the common tongue, others referred to them as the “Goblins of the West”. Originally their interactions with the early settlers such as those from Hallowglade were amiable. The goblins were nearly wiped out however by the different tribes of giants that make their home in the chain of mountains that surrounds the Westerlands. Those that survived were forced into servitude by the giants and now scout out and raid human settlements in the region.

In the year 1584, the Emperor John III sent his cousin, Archchancellor Leopold of Marna, west with the latter’s personal brigade from the Imperial Legion to defend the Holy Orenian Empire from the threat posed by the Sunless Sanctum - a haven for the necrotic and dark arts users. Using maps crafted by the Aeldinic cartographer John Lyons, Leopold and his men had decided to make their base of operations atop a cliff overlooking a conjunction of the River Piscatoris, River Salv and River Noumenon. This fort was named “Death’s End” and completed in 1586 and would host several homes, one of the first established plots of farmland in the boreal forest and a tavern called “The Pumping Piston”. One of the more notable features of the fort was its walls and how they wrapped around not only the castle but the small township and farming plot. Due to the heavy undead presence, Death’s End was always on lock down with a constant guard presence to ensure none of the undead breached the wall.

In 1592, Death’s End received heavy damage to its walls in what would be referred to as “The Siege of Death’s End”. A tribe of giants native to the region had been in constant conflict with the Imperials garrisoned at Death’s End and upon discovering their fort launched a massive attack utilizing large rocks to breach the fortifications and the undead that infested the land outside of the fort. While Death’s End was successfully defended by The Company of the Westerlands, there were heavy casualties among the non-combatant settlers who were caught in the battle with the undead and a giant that dared climb over the walls into the fort. Also during this year, Leopold of Marna was bestowed the titular title ‘King of Vandoria’. Having been the rightful heir to the defunct Kingdom of Vandoria before he was usurped at the age of three by his uncle John Godfrey, it is reported that such a title was long awaited by the Archchancellor.

Formation of the Kingdom

At the request of Leopold of Marna, his nephew Emperor Philip Frederick I released Leopold and his garrison of their vows to the Holy Orenian Empire so that they could continue their fight against the Sunless Sanctum in the year 1594 which was reaffirmed soon after by the Pax Occidenti, commonly referred to as the Peace of the Sun’s Smile made between the Axios Coalition and the Westerlands which resulted in White Peace.

Without hesitance and with the help of the Company of the Westerlands and Imperial refugees from Johannesburg in the year 1595, Leopold was able to rally a strong enough force to safely venture deeper into the boreal forest and establish a new permanent wall in preparation for his expansion plans to house his people. Soon after he stylized himself as Leopold Francis I, King of Vandoria and the Westerlands. His new seat of power, replacing the weathered fort Death’s End, was the city of Bastion - something the King thought symbolic to the integrity and sacrifices humanity has made to survive even in the most inhabitable of lands. 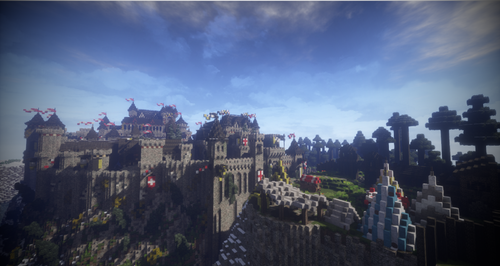 Bastion, Capital of the Westerlands

According to the Pax Occidenti, King Leopold Francis I claims the boreal forests the lies between the Sunless Sanctum and the western chain of mountains from the defunct Holy Orenian Empire as well as the lands touched by the watershed of the Rivers Piscatorus, Noumenon, and Salv and their tributaries.

The land is rich in ore but one must break through the permafrost that has never been documented to thaw since the active settling in the recent era. This has made agriculture incredibly difficult but not impossible. Many have given up however and have resorted to hunting and gathering. Others have resorted to acts of cannibalism.

The Kingdom of the Westerlands has an Absolute Monarchy style of government with King Leopold Francis I as the sole ruler of the nation. Under him is a privy council that acts as his advisors and enforcers in different aspects of the realm. They carry out his will and see to the implementation of his desired policy. Unlike other Privy Councils, the Westerlands lacks a standing Lord Marshal. In times of war, it is the King that inherits the role of Lord Marshal and he may delegate it temporarily to another at his own discretion.

The Privy Council is as follows:

The nobility of the Westerlands consists of the recognized families who have remained sworn to House Horen through the Vander Branch lead by King Leopold Francis I. The current list of nobility are as follows:

The Kingdom of the Westerlands prizes itself with holding old fashion values many have felt lost during the fifth Holy Orenian Empire. Humans are the favored race though a select few non humans have made their way up the social ladder.

Due to the harsh environment, resources are generally limited and rationed. Those who work hard and provide for the people are rewarded for their efforts and the government continues to seek new ways to reward those who display model behavior through both words and action.

There is a heavy focus on combating the undead, continuing the mission bestowed upon the founders by Emperor John III. Civilians are generally not allowed to leave a settlement at night unless accompanied by a soldier due to the undead presence in the wilderness. 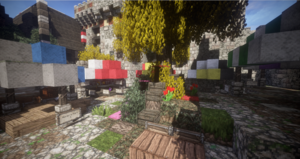 The Kingdom of the Westerlands uses multiple forms of commerce such as the universally accepted mina and resources of equivalent value. The government has plans to issue a reward system known simply as ‘Vandermarks’ which can be used to buy luxury goods, pay rent or buy drinks and food at the cantina.

The Westerlands is a melting pot of Human cultures with heavy Imperial, Kaedreni and Waldenian influences which puts humans above the other descendants as they believe humanity is the chosen people of the Creator. One of the unifying aspects of the Westerlands is the Vander Code - an ancient code of conduct dating back to the Aegisian Era that has helped shape and form other codes of chivalry since its reemergence in the Anthosian Era.

Why do Vanders fight?

While the people of the Westerlands have made no great contributions to the arts, their prized collection of Thersist portraits can be found all around the city if one were to seek them out. Predominant members of the family typically portrayed are Temp Thersist and his son Brutus Thersist.

Other portraits one may find are notable Imperials or Vanders long gone. Art is used as a way to honor great men and immortalize them on canvas. 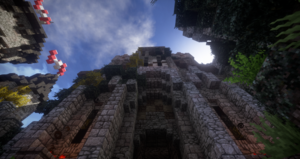 Cathedral of the dawning flame, Bastion.

The Kingdom of the Westerlands follows the True Faith, specifically the Owynist sect which derives its teachings from the Exalted Owyn. This particular sect is referred to as Rhoswenii Owynists.

The Kingdom of the Westerlands began as a small fort for an attachment of the Imperial Legion of the Holy Orenian Empire with the goal of eradicating the undead.

Most people would not know this, but the late Grand Knight Ser Ulric von Aesterwald “the Pilgrim” pushed heavily for the location Death’s End was later established on believing that a Well of Life was close by which he had longed to discover - perhaps to curb his own aging.

Many of the more zealous of citizens of the Westerlands refer to themselves as Vanders, even if they had no connection to the defunct Kingdom of Vandoria. This simply means they adhere to the Vander Code.

Many of the veterans who helped build Death’s End have an odd fetish for siegecraft as many came from Leopold’s personal sapper brigade. Engineering is a valued skill among the Vander people.