Jonah Stahl-Elendil is an Orenian statesman turn, Baron. He grew up in Brolwic, Aeldin & eventually sailed to Arcas where he would settle down. During his tenure in Arcas he climbed the ranks of the Orenian political system as a leading figure of the Josephite Party. Through extensive work he was appointed as the Vice-Chancellor of Oren under Simon Basrid & Archchancellor upon the retirement of the Basrid. For seventeen years he served as Archchancellor under the reigns of Peter III, Anne I & Joseph II. In 1799, Jonah was afforded the Barony of Stahl-Elendil after announcing his plans to retire to Anne I.

At the age of eighty-four, Jonah enlisted into the Imperial State Army during Alren DeNurem's tenure as Imperial General. He was admitted as an Ensign due to his age and experience, particularly during the War of Two Emperors in which Jonah fought for Joseph I's Holy Orenian Empire. Jonah, as an Ensign was wildly unpopular among the lower ranks, as many saw him as someone who was given junior officership without working to earn it. This drove many of the enlisted to become jealous of Jonah and ignore him. Jonah turned to writing during this period, publishing two lengthy novels on the Adunian Race, titled The Adunian I and The Adunian II. Both of his novels still serve as leading works in the Adunian community up to this day. He retired from the service in 1763, opting to take up a career in politics instead of the military.

Outbreaking in 1775, the Sutican War saw the Holy Orenian Empire declaring war on Sutica after its King, Corwin I had slain a cousin to Peter III, Holy Orenian Emperor. During this time, Jonah along with many of his allies and other members of the Josephite Union resided in the Commonwealth of Kaedrin. Kaedrin - Due to it being the farthest settlement away from military support and lacking crucial defenses saw heavy raiding during the war, thus causing many Kaedrini citizens, Jonah included to lobby for a state-sponsored militia. While the request was almost immediately denied, citizens of Kaedrin still banded together and fought off Hangmen raiders.

While fighting alongside other denizens of Kaedrin against a common foe, it gave Jonah an opportunity to interact with the common folk, thus furthering his political popularity. It was during this period when Jonah befriended the members of the House of Rourke, House of Komnenos and House of Cenobia who went on to form a large portion of his Kaedrin voter block. When Jonah took office as Archchancellor many of his Kaedrini allies would go on to serve under him in different positions across the Empire.

In 1783, Simon Basrid resigned as Archchancellor upon his forty-fourth year in office. The position was then given to Jonah as he was Simon's Vice-chancellor. Jonah's administration saw a variety of changes to the Empire's government. Most notably, he stripped the Council of State of the majority of the old minsters and replaced them with members of the Josephite Party, many of which were allies he had made in Kaedrin. While his introduction of an all Josephite Council of State was highly controversial and regarded as bias, his council was highly efficient. Almost immediately changes could be seen, especially in Helena where Jonah's Minister of the Interior, Padraig O'Rourke had reformed the outdated Livery Board into a fluid City Assembly with elected aldermen; a process which would eventually transfer over to Providence and shape the future of Oren. On the 14th of Sun's Smile, 1784, Peter III had passed away due to sickness, and his eldest daughter, Anne I would become the first female monarch of the Holy Orenian Empire. Jonah regarded Anne as someone easy to work with which led to a productive relationship between Monarch and Council of State.

In 1786, Jonah and Anne would gain fame for their expulsion of the Kingdom of Haense as a vassal of Oren during the event which would go on to be known as Haeseni Independence Day. While Jonah was on the fence about releasing them as vassals, it was primarily his Vice-Chancellor, Franz Nikolai de Sarkozy who convinced the aging Adunian to do so.

Three years later, on the 3rd of Godfrey's Triumph, Jonah was met with further controversy in the form of an open letter to his ministry from Tanith Vursur, a mali'ker citizen of the Empire who accused Jonah's ministers and Josephite colleges of torturing and assaulting her. [1] After a short investigation the Ministry of Justice dismissed the case. Many believed the case to be a story created by Edward Napier and Tanith Vursur due to a personal rivalry with Padraig.

Fortunately for Jonah, the rest of his tenure as Archchancellor went without drama. From 1795 to 1796 he oversaw the evacuation of Helena and the voyage of the imperial population to the newly found continent of Almaris.

After announcing his plans to retire to Anne I, he was afforded a Barony in 1799 so that he could continue his political work in the House of Lords after his resignation [2]. He followed through as in the next year he released Hold Faith: A Farewell Address to the public. Jonah left the capital soon after, electing to move to the countryside in the Municipality of Redenford of which he was made Proprietor of in the following year of 1801. Age had finally caught up to Jonah as progress on Redenford moved slowly and he instead installed his allies, Keaghen Armas and Arnaud de Ruyter to run the Municipality instead of himself.

On the 11th of Harren's Folly, 1834, an announcement came from the Stahl-Elendil household that Jonah had passed away in his sleep. He wasn't known to be a sickly man and upon examination of his corpse, no wounds were found to be inflicted therefore, it was widely assumed Jonah had passed due to old age, despite most Adunians being known to live up to two hundred. His death at the age, one-hundred and fifty-six made him the oldest living Human of the eighth Empire. 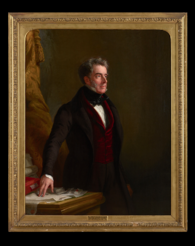 A portrait of Jonah Stahl-Elendil commissioned by himself to celebrate the expulsion of Haenseni-Ruska from the Imperial State. Painted by Rayehm Wynsehn, circa. 1787