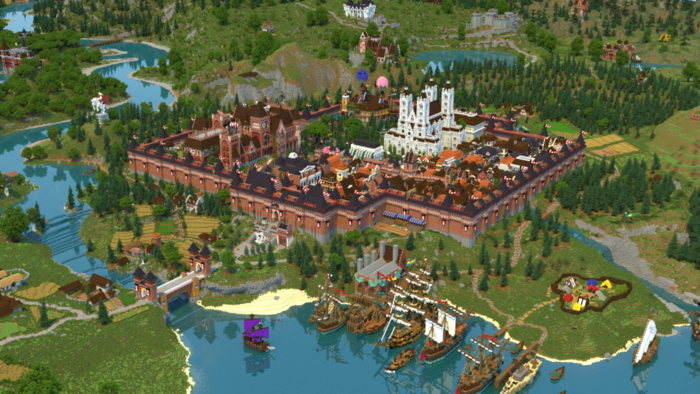 "New Providence, Capital City of the Holy Orenian Empire, circa 1854"

The Capital City of the Holy Orenian Empire, New Providence stands as a beacon of Imperial might on the eastern hills of Almaris. The city borders the River Augusta & the Kahaen Sea. New Providence hosts the largest Heartlander population in all of Almaris. Other human races such as Highlanders have a large presence in the city as well.

Since Providence's creation, the city has been plagued by bandits & raiders known as Ferrymen. They started small, robbing & killing folks traveling between the eastern fleet & the capital city. During 1797 & 1798, the road warriors became bored with small robberies & moved onto attacking the main city. The Imperial State Army & The Ferrymen engaged in a great many skirmishes during this time. One significant raid during 1798, during which five Ferrymen entered Providence and killed approximately fourteen ISA officers, led to changes within the city defenses after it was found that The Ferrymen were able to exploit the short walls to be able to scale over them to flee from Imperial reinforcements.

Coming into the year 1799, changes continued to be made to the cities defenses as more Ferrymen attacked & showed the ISA critical weaknesses in their designs. These alterations proved their worth as stray raiders were cut down by Imperial Soldiers. Around this time, other bandits took advantage of The Ferrymen weakening the city & they decided to attack. These new waves of bandits however proved to be futile against the imperial forces. As the year came to a close, the Ferrymen returned to attack the city. In a skirmish on the outskirts of the city, the imperial soldiers once against met their makers. Not all was in vain as foolishly, a Ferrymen charged into a gatehouse to find himself surrounded & slaughtered. Even with the imperial forces still losing this engagement with The Ferrymen, it showed an improvement in Orenian ranks.

The frequency of imperial trainings increased & eventually more imperial wins started pouring in. Notably, in 1800 a stray Ferryman was captured by an imperial patrol. The Ferryman was sent to prison & as suspected, a large Ferryman company raided Providence in an attempt to reclaim their shackled comrade. The raiders were outnumbered by imperial & beaten back out of Oren. No imperial casualties were taken.

Throughout 1801 the number of raids decreased severely & the few who tried to raid Providence were quickly met with the sword. As summer came, the raids came to a standstill, marking the end of the series of raids. 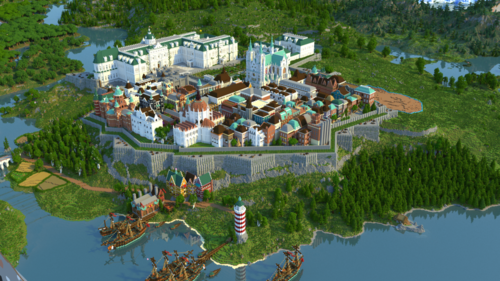 The Original Providence, Capital City of the Holy Orenian Empire, circa 1800

The first mayoral election in Providence occurred on the 12th of Godfrey's Triumph, 1797 with four candidates; Doctor Desmond Morgryn, Sir Henry Marshall, Ciprian de la Baltas & Kinsrell Commandore. During this time citizens could vote in two ways, mailing in their ballot or going to the town hall to vote in person. As the elections drew to a close, suspicion was raised as some of the votes were cast in the name of deceased individuals. To the discretion of the Providence Magistrate; George Galbraith, the ballots were nulled. A new voting session was scheduled on the 21st of Tobias' Bounty which implemented the new rules of citizens may only vote in person.

Throughout the day the elections remained closely tied. When the results of the election were announced in the tavern by Victor Halcourt later that night, the election turned out to be a tie with Doctor Morgryn & Mister de la Baltas both having forty-eight thousand votes. With both of the candidates in agreement, a coin toss was had. The best out of five tosses would be elected. Baltas chose heads & Morgryn by default was given tails. The coin flipped by Mister Halcourt landed on the tails side three times in a row, proclaimed Doctor Desmond Morgryn as the first mayor of Providence.

Following the mayoral election was the alderman election which took place a month later. With a little over a dozen people running, only seven would make it onto the city assembly. The rules for this election were the same as the mayoral ones, that is you may only vote in person. The voting process ran throughout the entire month of the Sun's Smile & the results were announced on the 23rd. The results are as follows.

The Skirmish at The Basilica

In 1803 on the 11th of Tobias' Bounty a skirmish broke out at the Basilica of the Ascent between The High Pontiff, Owyn III & Cyril Cardinal St. Publius. The Holy Knights, fighting in favor of The High Pontiff were swiftly crushed by the outnumbered by The Rangers of Eastwood who fought for The Cardinal. This marked The Rangers of Eastwood's first victory in a skirmish along with marking an ensuing legal battle to take place. Afterward, Cyril Cardinal St. Publius & his supporters published a statement saying they refuse to recognize the authority & leadership of Owyn III. [3]

A view of the main Old Providence square, centering around the city tavern, 1796

Burning of the House of Commons, 1809

In the spring of 1809, the Holy Orenian Empire was attacked at the heart of its democratic principles; the House of Commons. This act was the result of a terrorist operation orchestrated by the MRA beginning years prior with the burning of several carriages which ultimately leading to the burning of the House of Commons. At first, a fire was spotted coming from the building by a passerby who rushed to the gates alerting Private Edith Hope of the raging inferno. With George Galbraith, she beelined straights towards the building. As they watched in horror they called for reinforcements to come with buckets but by the time they had arrived, it was too late. The building had caught fire in all wings as George Galbraith and several Imperial State Army soldiers were trapped in the commons wing of the building. For hours the structure burned uncontrollably which compromised the building's structural integrity and eventually led to the collapse of the roof down onto the trapped victims below. In the aftermath of this event, the city went into a state of mourning with a memorial being erected near the old entry point & mass being held for the fallen.

Similar to Helena, The Lord Mayor is a publicly held office that is elected upon public vote. The Lord Mayor has a cabinet of advisors known as aldermen. The Lord Mayor is allowed to appoint a deputy mayor to serve under them for their term. When a term is completed, the mayor has the option of running for re-election.

For more information on the full powers of The Lord Mayor, click here!

The job of a city alderman is to advise The Lord Mayor along with creating, reforming & removing local law. Just like the mayoral office, the offices of the alderman are publicly appointed by the citizens of Providence. There are seven alderman seats that make up The City Assembly. For the first assembly meeting of a new term, the mayor leads the session however, during that session a speaker is appointed who leads future meetings of the assembly. The speaker has the right to appoint a deputy speaker for times when they are absent.

For more information on the full powers of The City Assembly, click here!

The City Clerk is nominated by the Lord Mayor & approved by the City Assembly. The City Clerk is in charge of the Providence clerk team, whose job is to sell city properties, collect city taxes & evict criminal properties. The Clerk Team is made up of twelve people, The City Clerk, The Deputy City Clerk & ten clerks. In other nations, clerks are known as stewards.

In 1802, Annabelle Kelmenour started reforming the application process of the clerk team. Instead of the old way of hiring where all you had to do is sign up to become a clerk, an application system was set up. You'd have to apply to the Clerk Office via bird. Your application would then be read over & which would determine if you move onto the next step of the application process which is an in-person meeting. If your application is good enough to make it to the in-person meeting, you would be asked a multitude of questions by both The City Clerk & Deputy City Clerk. The result of that meeting would end in either being hired or a rejection.