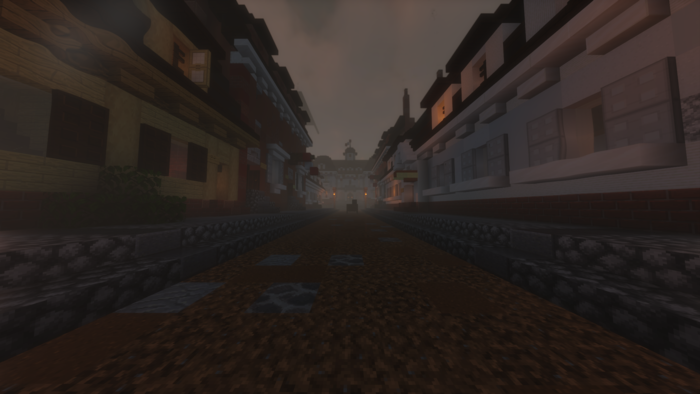 "Main Street of Redenford, City of the Holy Orenian Empire, circa 1811"

Founded originally by Henry Fredrick Helvets, Duke of Cathalon a year after the descendant's voyage to Almaris, the town was established in the southern district (later named Right-Bank district) of the Holy Orenian Empire. Throughout the span of the next several years, progress on the town began to dwindle. In order to revive the town, Joseph II, Holy Orenian Emperor appointed Jonah Stahl-Elendil as proprietor of Redenford in 1801.

Upon Jonah Stahl-Elendil's appointment as proprietor he began drafting up new designs for the city with the help of his long-time friend, Arnaud de Ruyter. Designs for Redenford took approximately two years for the new administration to draft up. Following the completion of the blueprints, Arnaud along with other members of his family started constriction of the town.

In 1808 progress on the town once again came to a standstill as many builders wound themselves demoralized. Once more changes came to the design of Redenford when Olivier Renault reintroduced the original design that he drew up for Henry Fredrick when he was the proprietor. After a year of discussion and modification to the original design, Jonah made an executive decision to tear down what was currently built of Redenford & replace it with Olivier's design.

By this time, Arnaud found himself burnt out on construction & chose to leave the project for the time being. Therefore, Jonah brought in Otis de Rosius, Keaghen Armas & Patrick O'Rourke to oversee the construction of the newest version of Redenford. With the new management walls of homes were raised quickly and the main street was completed by late 1810.

It was in the next year; 1811 when the Sedan Rebellion broke out, forcing construction of Redenford to grind to a halt as the city was located only four hundred meters from the rebel's home base, making it a prime target for contention. As a result, operations led by the Corroded Company saw the city of Redenford being walled off to protect it from the rebels. Unfortunately, these walls didn't last as the Sedanites managed to bypass them and harass the builders and civilians. Two years later in 1813, the rebellion came to an end, and Redenford was forgotten about. Progress came to a halt upon the completion of the main Redenford strip. Blueprints for future Redenford expansions remained tucked away in desk drawers for nine years.

In 1822, Vice-Chancellor of Oren, Keaghen Armas, and the Orenian Emperor, John VIII recognized the decline in Redenford and decided to appoint Patrick O'Rourke as Proprietor. Patrick began amassing a large force of builders, mostly containing members of the House of Rourke and their cadet branch, House de Rosius. On the 2nd of Godfrey's Triumph, Patrick and his rally arrived in Redenford and began construction of a draw bridge outside of town. With the draw bridge being constructed in just a day, the focus was then turned to creating an arena and storage house right outside of the town. Both buildings were completed within a fortnight thus turning the builder's attention to their last project of the month, a new, larger tavern which was created in a record seventeen hours with the assistance of Simon Pruvia, the Viscount of Provins. 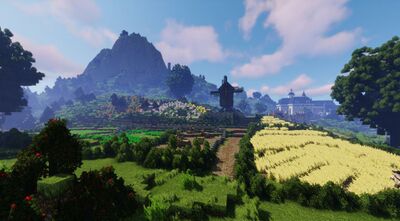 The Eastern Countryside of Redenford, Circa. 1822.

During the Redhood Uprising in the year 1818, a force of approximately two thousand Redhoods captured the Municipality with relative ease. Upon learning of the town's capture, the Imperial State Army was deployed under the leadership of Captain Erik var Ruthern and Captain Caspian d'Arkent. A battle soon followed with the Imperials ending up victorious despite the heavy casualties.

During the Daylight Savings Campaign by the Mercatorii Revolutionary Army, Redenford was once again conquered by an enemy force. Early into the morning of the 2nd of Malin's Welcome, 1827, the MRA had captured the main street of Redenford, and around they had placed several wooden blockades to seal themselves into the town. The Ministry of Justice led by Charles Galbraith was sent to respond. The MRA forces totalled approximately five hundred men while the Ministry of Justice almost doubled that at approximately nine-hundred and fifty. The Ministry of Justice at first attempted negotiations however, that soon fell through and a battle began on the Redenford Bridge.

The Ministry of Justice formed ranks on the bridge and pushed up towards the first Mercatorii blockade, seeking to topple it. Given the exposed nature of the MoJ footmen, the MRA was able to shoot several hundred down on the bridge. Despite that, the overwhelming numbers of the MoJ were able to break through at last and reclaim the town. The MRA led by Prüsian Ksiæzect called a full retreat and left out of the south exits of the town. During their retreat, they were able to inflict heavy casualties on the MoJ agents that gave chase. With Redenford reclaimed the Battle was considered a pyrrhic Orenian Victory due to the heavy casualties the Ministry of Justice sustained. Their initial force totaling nine hundred and fifty reduced to near four hundred.