John Charles Novellen (1757-1837) know regally as John VIII, was the eldest son of Joseph II & Anne I. He served as the Duke of Helena since 1785 and later as the Holy Orenian Emperor in 1814 upon the passing of his father. In 1780, John married Wilhelmina Helvets of Cathalon. However, prior to John being crowned as the Holy Orenian Emperor, he divorced Wilhelmina after decades of a fruitless marriage. He remained without a legitimate child and thus his brother, Prince Philip, Duke of Crestfall was made his Heir Presumptive.

Born in the imperial year 1757 in the Novellen Palace of Helena as the second of six children to heir-apparents Anne and Joseph of Emperor Peter III. Prince John Charles Novellen was destined for a life of responsibility & duty; the pressure of the Empire on a young boy’s shoulders, every action an act of the collective Oren; few can invite a life of such expectation. In the limited knowledge on the affairs of the imperial household, the citizens of Oren were able to piece together the existence of a difficult relationship between the Prince and his mother. This relationship was fine tuned to the public eye, but it was the Empress’ posthumous letters and private relations’ disclosures that revealed a combative opinion of her son. His elder sister, Elizabeth, would be the warmth in John’s life of obligation, fulfilling a maternal role despite their barely two years of difference in age.

At reaching his double digits, John Charles was betrothed to Lady Irene of Metterden for the purpose of attempting to repair the union of Oren and Haense. The betrothed pair would come to co-exist for the remainder of their adolescence, with Anne looking over either of their shoulders, but especially that of John’s, as he was expected to perform his duty to the empire without a word of opposition- and so he did, relaying little of his private life and sentiments. This difficult relationship with his mother likely led to the prince’s reclusivity in his youth, for few saw the elusive Novellen until he was assigned to the Imperial State Army beside his cherished troops, a tradition now practiced by all direct heirs to our holy Oren. 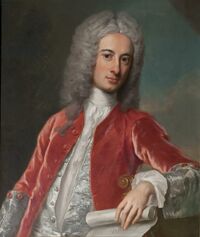 Throughout a majority of this period of his life, he was known as the Duke of Furnestock (1780-1787). When Lady Irene of Metterden declared her aversion to her future position as Empress just days before their wedding was to transpire, he would be instructed to quickly marry another lady, Wilhelmina of Cathalon, and as was his duty, he agreed. By this marriage, he would be granted the title of Duke of Helena (1787-1814), and named the official heir to the Empire as the firstborn son of the now regnant Anne & Joseph.

The Army was a point of joy for the reverent Prince, and is the place where he would create the greatest of friendships, free from the expected obedience that shadowed him constantly. As a fellow soldier, he fought in the Sutican War in the defense of one of those friends, Peter Amadeus, and the Orenian values for which he stood. Later, he’d also give his service in the Inferi War defending the cumulative life of the realms, a force of inspiration for the storm of men fighting in his and the descendants’ defense.

When came the death of his mother, John grew to take an interest in the affairs of his family and the transfer to the realm of Almaris, overseeing the wedding of his nieces and nephews- notably the marriage of Prince Philip Aurelian to Amadea of Pompourelia -whilst growing closer to his sister Elizabeth as any relationship he held with Lady Cathalon crumbled into ash. To this day there exists exhaustive bewilderment around his marriage’s failure to consummate, with speculations ranging from raucous to defamatory. It is presumed that he began to have relations with Miss Theresa Mae Halcourt nearing the end of his and Lady Cathalon’s marriage. With Ms. Halcourt, he would finally prove his fecundity in spite of a lifetime of whispers and scandalization. His first child was born a bastard by the name of Joseph Maria.

On the eve of his father’s death, John Charles was 57 years old, having lived a full life preceding his coronation on the 10th of Tobias’ Bounty, 1815. He ascended as ‘John VIII,’ and immediately set about creating the Edict of Renzfeld to declare that his brother Philip and his children would follow in the line of succession due to his lack of legitimate progeny.

John VIII had inherited an Empire with revolutionary and hostile factions in high density. The MRA (Mercatorii Revolutionary Army), the RAF (Revolutionary Armed Forces), the Sedanites and various other pressure groups stood as key players of anti-orenian sentiment, a repetition of the cycle of the Holy Orenian Empire as we have observed it occur in history countless times.

Four years after John’s coronation, King Sven II of Norland declared war against Oren, citing that a supposed order of attack from the ‘Sons of Horen’ was committed against Norland citizens by the Empire. The War, called the Tenth Nordling War by imperials, is a modern example of history’s inconvenient method of duplication. John VIII contracted the Metina Company of Luciensburg as well as the Hounds of Don in aiding with the war effort, and mobilized the Imperial State Army in various skirmishes, winning five battles and skirmishes out of nine that happened in a period of 5 years. The neutrality of Haense, a nation known to wield considerable distaste for Oren, was a hot topic of debate around this time, but the Canonist Church’s denouncement of any canonists who would fight alongside the pagans of Norland effectively ended that discussion, and mirrored the outcome for the withering Norlandic alliance. The war was officially won in 1823 with the Treaty of Providence.

John’s Administration was active foremost in the manifestation of treaties, social progress and peace-keeping, with various movements arising around the time of his ascension, including the upsurge of the Risorgimentist, Adrianite, White Glove, and Rosemoor political organizations, not to mention all of those in opposition to all previous. His empire was lively with discussions about the correct way to foster the future of humanity as progress loomed over the heads of citizens, some begrudged by it and others accepting. John himself seemed averse to the changes, or perhaps he was an emperor determined to lead his people without the obstruction of liberty that would arise from expressing his opinion on those matters.

In the month of Sun’s Smile, 1831, his beloved sister, Elizabeth Anne, originator of the Rosemoor Bill, passed away, with what many presumed was a broken heart over their brother Philip’s censure on matters regarding the bill just a few months prior. John could absolutely not stand for this, apparently driving a wedge between the brothers that lasted until John’s later death on the 12th of Owyn's Flame, 1837. He reigned from 1815-1837, extending over a period of 22 years of near-unblemished calm within the city of Providence and its surrounding municipalities, the only exception being a war which was won absolutely - decisively.

Titles, Styles and Honors and Arms

Before his father's death in 1814, John bore the arms of the empire, differenced by a label of three points argent, showing him as the heir to the Holy Orenian Empire. Upon his accession as Emperor, John's arms were updated with the removal of the label of three points, to show him as the new emperor and head of the House of Novellen.