The Battle of Outer Arentania named for its geographical location on the outer borders of the Holy Orenian Empire is the largest battle of the Tenth Nordling War and second largest of Almaris to date. Furthermore, the Battle of Outer Arentania is one of the shortest battles in history, clocking in at a little under five minutes which earned it another name as the Five Minute Battle.

On the 9th of the First Seed, Year 23 S.A., Norlandic government officials published a proclamation, which stated the Nordlanic intention of marching their main military, The Northguard southwards towards the Empire [1]. The Imperials quickly responded by moving the Imperial State Army, westwards in order to halt the advance of the Northguard.

"Our borders were made secure, and the navy was patrolling the sea well, so most of the army and those mercenary fellows were sent westward into Arentania. All in all, including the general staff and camp helpers, there must have been about one-hundred thousand of us camped along the river near Esbeck in the winter of 1820. The season was mild, and we were in the supply of the towns nearby, so it was no hardship at all. There were Southbridge men acting as scouts in the mountains, living up there and reporting back anything they saw of the enemy advance. Come springtime, it turns out the Nordling king and his mercenaries weren’t planning on a direct invasion, but were trying to sneak by the mountains to join Urgwan in Oltremont." - An excerpt from Turning the Nordling March: The Battle of Outer Arentania by Imperial State Army Ensign J. Fitzpeter

The first contact was made in the 25th Year of the Second Age on the fields of Outer Arentania near Lake Halstaig. Both hosts made camp on either side of the field, preparing for the battle to come. On the 4th of Grand Harvest tensions were high and the Imperial Force began moving out from their camp and pushing towards the Norland Host, the Norlanders followed suit.

"It seemed as if we were knowingly being sent into a possible death trap. We knew the Imps would outnumber us, but it seemed our Commanders didn't care much. Regardless, at the time our spirits were high and we were hopeful for a decisive end to the War of the Three Kingdoms. From what I can remember, our host consisted of forty-two thousand soldiers, three hundred of which were my own Clan Bannermen. We made camp west in the region the Imps seem to be calling Outer Arentania, and supplies was coming in from both Elysium and Ironguard simultaneously. While I cannot say for certain what our Commanders were planning that day, it seems that we were foolishly trying to bait the Imps into open battle. In hindsight, it was a decision that would cost us a majority of our host and the War." - An excerpt from the personal journal of Hali Olavsson, Chieftain of Clan Kvitravn 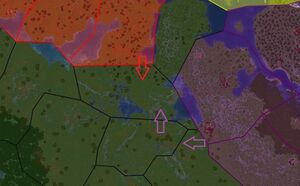 "Map of military movement during the Battle of Outer Arenania, circa. 25 SA, by High Keeper Alisa Camian." The Holy Orenian Empire is represented in purple and the Kingdom of Norland in red.

As the few remaining Norlandic Infantrymen withdrew from the battlefield, the Imperials declared victory. Bodies of the fallen Orenians were transported back to Providence for a proper burial while many of the Norlandic bodies were buried on the field. One Imperial State Army soldier declared it looked like "...a city of tombstones..."

The Imperial Victory on the Outer Arentania fields halted the Norlandic victory from continuing further south and allowed for the Imperials to begin pushing westwards towards the southern Norlandic borders. However, as the Imperials began mobilizing to march on Norland, King of Norland surrendered, thus making the Battle of Outer Arentania the final engagement of the Tenth Nordling War.