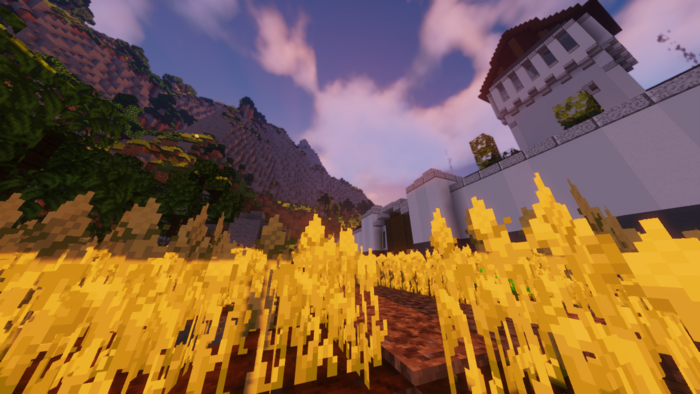 "The white walls of Halstaig with Erin Hall looming in the background, circa 1809"

Halstaig, The Steadfast Onlooker. Located on the western borders of the Holy Orenian Empire in Almaris, the white walls of Halstaig stand as a familiar beacon for the Adunian race. Governed by the House of Rourke; a cadet branch of House Elendil, the lands of Halstaig were first settled in 1797 under the leadership of Anastasia O'Rourke and Jonah Stahl-Elendil. Upon the first structures being erected, old Adunian clans such as Armas & Wynsehn flocked towards the settlement, reuniting with their brethren.

To the east, an endless mountain range, to the west, a vast grassland filled with catacombs, and in between sits the County of Halstaig. The original settlers of Halstaig found themselves in a strategic geographical position. To the northwest sat a lake that produced water and fertilized fields for the residents. To the east laid an expansive mountain range, providing the County protection from outside forces. As for the road to Halstaig, it was rough. Consisting of pure dirt, the road ran from the nearby town of New Esbec, through the winding mountains only to eventually come down to rest along the shoreline of Lake Halstaig. While the road guaranteed a handful of people could safely travel on it, it denied armies and raiders access to move troops in force, furthering the natural defenses of the adunian settlement.

The history of Halstaig is one that goes deeper than the Recolonization of The Westerlands. The area that is located in, and that it is directly adjacent to the old and now abandoned Sunless Sanctum. The area where those who possessed darkened souls and undying bodies resided. The Westerlanders settled near this area many years before the founding of Halstaig, as a defensive counter to the looming threat that was to come from the Sanctum of The Undead. This driving force, the defense of the mortal lands that is, drove many to head west to defend Axios and their land. Though these events culminated in the destruction of both sides, it brought forth advances in the understanding of Axios and it's peoples. Bringing many together, while still tearing the landscape apart. A historic area, and one to be looked after even when the events have settled down into the dustbin of history.

Halstaig now is to be a new stronghold of safety up West, to those who remembered it, or to those who wish to know what remains. It was founded when Braehn of the Clahn Elendil gained funding from the Holy Orenian Empire and was able to set up a colony in what used to be The Westerlands, though not exactly near Bastion, it was further north. The construction was completed quite quickly, the Adunians hoping to get to work. Halstaig being quite the good place to revitalize what may be a valuable place; The West. Where old ruins and treasures lie in the old sunken ground. Snow, silt, and ash covered gems to be found from all corners, and opportunities for the empire.

The settlement has only just recently been constructed, and there is much to be seen from it. Halstaig's future hopes to bring advancement in the culture of The West, what it was, and what it could and can be.

The lands surrounding Halstaig are rough and gritty. Cold and biting winds, coupled with the numbing snow that follows, makes for one of the rougher places to live. Carved out dirt paths, ruins, and rubble, rocks and mud. All these obstacles make it hard to travel around the area, though what gives the most pain to travelers is the cold and snow, harsh weather is known to be rained down upon the west. God's wrath for the sins of the undying. The lands that Halstaig sits upon, however, are more tame and relaxed, though still in the hard climate, its high walls and sturdy structure keep it warm and safe from the winds. The lands around Halstaig being so difficult, that there are rewards given out for completing tasks and expeditions such as mapping and treasure hunting in these areas. Keeping with the culture of Halstaig, the spirit of the west still haunts the walls, the walls being built from the ground. Stones and bricks were laid into the earth, along with other things quarried from the ground and land.

The first advantage of Halstaig is its location concerning the surrounding area. It is near a ditch and a river. This ditch and river provide protection and cut out two places that the city would need to defend, and even if they did need to be defended, men could easily be stationed upon the wall for quick defense. The second advantage of living in Halstaig is that the city is laid out in such a way so that if anybody were to enter, they would be put into a long stone corridor that could be easily fired upon, charged through, or blocked off. Making it harder for attackers to come and invade without scaling the walls first. The castle is defended by high sturdy stone walls. The castle enveloping the city, or town, whichever one may prefer. These protect those in the city from those attempting to break-in, there are very few weak spots, and it would be hard to scale the walls.

Halstaig is sturdily built around some more flat land, though around it is many trees, mostly untouched. The city faced the north, its entrance being there as a road leading up to it, winding and harder to follow, it was easy to get lost when coming by foot. A cart being preferable in this climate. Around its backside, to the south, was a giant ditch, with steps leading up out of the ditch for those who may have come from the bottom of it. Inside Halstaig it was laid out quite nicely, starting from the ground the castle rose instead of staying on one level. Making it easier to defend if anybody were to enter that was not wanted. A long stretch of road that leads up and out of the staunch depression in the stoneworking. Banners and flags flapped in the light wind, the ground beyond this point being nicely bricked, though still broken at points. It was laid out openly from this point onwards, being quite easy to maneuver about, but still defendable. The lords keep being across a bridge upon a hill. A gate separating this bridge, along with another gate inside the keep itself. Making it quite the stronghold for anybody who wished to hold themselves up in a safe place.

The Government in Halstaig is quite simple. It is ruled by a simple Lord, this being Braehn Elendil for the moment. He rules over and sees over the construction and management of most buildings in the colony. Making sure everything is working in order and on time. It also takes into consideration the values and opinions of its people. The Adunians being known to hold honor as a virtue, they would not hope to cause too much dissent within their holding. There is a High Thane, who also helps with the castle, handling other operations and functions. This High Thane, John Lyons, runs the Lyons Institute, and other organizations for exploration and the advancement of overall historical knowledge and anthropological findings in Axios. The Thanes Council assists in decisions that the Lord will make, of course, making it easier for the lord to gauge what is needed, and what he needs to do.

The culture of Halstaig is reminiscent of The Westerlands and old Adunian settlements. It is to value honor rather than other things. As geography heavily affects the culture, it is a tougher culture, and that means less comfort in its completeness. It is not exactly the opposite of anything that has been done before, still having those that are from Oren and other areas, but it still brings a new flavor, or perhaps one of old, one of The Spirit of The West, and The Spirit of Adunia. Halstaig does not fit into any set culture pre-requisite. As it is a colony, and a common trait that colonies hold is the diversity in culture, race, and of course ideas. It is now more about knowledge and exploration than killing and creature hunting.

The Rangers, brave fighters that are trained in combat to protect those of Halstaig. They are meant to be valiant and steadfast in their fighting, and still quick. Like the Adunians and Westerlanders of old, they are meant to hold these values and execute them to the will of the town. They are not meant to be taken too lightly and are meant to be respected in the culture. They are trusted with protecting those deemed important, and making sure everybody is safe, and there is no trouble with how one acts there. Though not moral protectors, and crusaders they are protectors of brawn and steel.