From Lord of the Craft
(Redirected from Inferi War)
Jump to: navigation, search

The Inferi War was a realm-wide conflict in the late 18th century of the First Era, located in Arcas. It began with demonic forces from another world landing near the southern coast of The Korvassan peninsula. Through the strength of overwhelming numbers, Inferi forces were able to conquer Korvassa and route the Descendant forces off of the island. Eventually, the entirety of Descendant nations banded together, reclaimed the desert landscape and drove the Inferi off of Arcas. 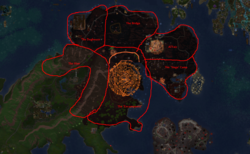 Map of the Korvassa during the war

Heavy W.I.P Still finding information on the names of the other Inferi Leaders & other Battles in the war.