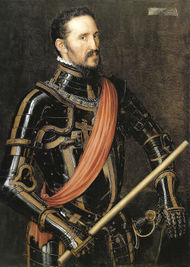 Emperor John I, first Emperor after the Horen Restoration

The Restoration of the Imperial State, known most commonly as the Horen Restoration, began in 1526 when the Imperial State was reformed by Emperor John I after the assassination of King Guy of Oren masterminded by Charles Henry Horen, John's father, and his Polycarp Plot. The term is used both in reference to the reestablishment of the Imperial status of Oren but also the following several years of political reform, mainly focused around the bloody Eighteen Years' War.

The Horen dynasty's rule of the Holy Orenian Empire officially ended after the abdication of Emperor William during the Partition of Kingston between himself, Grand King Thorin Grandaxe, and numerous human petty royals, including King Garth of Savlus and King Lachlan Mor of the Harrenites. The Empire was later restored by the Prophet Sigismund, and was ruled off and on by both the House of Carrion and the House of Chivay, until finally collapsing after the exile of Emperor Alexander.

When Guy de Bar was elected King of Oren in 1523, he had aspirations in claiming the Imperial Throne, with many of actions attempting to solidify his house's claim. He had secured the throne of Salvus from the claimant Louis Francis Hightower, landed a majority of his direct family's kinsman for better support within the noble estates, and tried to secure himself a guaranteed coronation from High Pontiff Daniel II.

Named for Charles Henry Horen's monastic moniker of Brother Polycarp, the Polycarp Plot was orchestrated chiefly by its namesake, who galvanized the opponents to Guy de Bar's rule together in a singular conspiracy. Their reasons for joining the scheme were extremely varied and carried out on a number of different pretexts. Its main aim was the restoration of the House of Horen, chiefly through the assassination of King Guy and a quick coup d'etat.

The Church of the Canon proved to be one of Polycarp's staunchest supporters in the plot, providing a majority of the manpower and materials essential to its survival and completion. Much of the plot's cabal included clerical personas, including the Bishop Iosif of Roiye, Bishop Renauld d'Metz, and Bishop Edmond de Montfort (who would later be elected High Pontiff). Reasoning for clerical support behind the Horen pretender came with the Church's uneasy relationship with the current Orenic State; partly with King Guy's refusal to relinquish his son Sergius, Count of Drusco into Church custody and his slow response to the earlier Owynist heresy sprouting within the province of Redmark. Bishop Edmond de Montfort spearheaded the Church's involvement within the plot, and so became the primary agent within mainland Oren.

Titus de Sola, the king's father-in-law, as well as his youngest son Vanderus de Sola, were among those who considered the state of Oren under Savoyard rule to be regressive. As kinsmen of Vibius de Sola, the famed general who had prosecuted a war of domination against nonhumans, Olivier de Savoie and Guy de Bar's passive stance towards these same nonhuman polities was interpreted as weakness, or worse, cowardice. As Duke of Istria, Titus had written of the indomitable Imperial and Kaedreni spirit, as well as humanity's manifest destiny to expand in total control of the known world. The pacifism and isolationism from world affairs characteristic to Savoyard policy acted in direct contravention to these ideals. While they supported the royalist faction during the Dukes' War, the de Solas of Istria resented being forced to war against other humans, labeling it the 'Brother War'. Accordingly, their support for the kings from Savoy was privately eroded, and they began to consider supporting a new claimant who would unite the divided mankind, right the wrongs of the Brother War and reignite the Imperial spirit in a reformation of the golden eras of old. To find this new claimant, Titus de Sola needed to look no further than to his maternal nephew, John Frederick, and so began the spark of the conspiracy.

Helton Chivay, a dynast of the Chivay family, acting on the instruction of his great-uncle Benda Chivay, also joined the conspirators. Personally frustrated by the inability of the Savoyard monarchs to recreate the Holy Orenian Empire of yore, Helton had served as governor over the conquered wood elves in King Olivier's name, where he had developed human supremacist ideals similar to those of Titus de Sola. Coming to the conclusion that Savoyard rule was impeding the ability of humanity to achieve its necessary dominance over the other descendant races, Helton sought other options initially before being directed to the Polycarp Plot by his kinsman, Benda, who had become acquainted with Brother Polycarp and John Frederick in their flight from the Emperor of Aeldin.

Despite the large presence of the Savoyard nobles during the Dukes' War, there were notable non-Savoyards in support of the royalist faction of King Olivier of Oren, including the reputed Publius Bracchus, petty lord Percival Staunton, and the Kovacs-scion Jan Kovachev. All three carried grudges against Olivier's successor, Guy de Bar. Percival Staunton had been promised a duchy by the king for his support for the royalist cause during the Dukes' War, however, upon the crown's victory, the newly-ennobled Staunton was granted only a comital title. Considering this a slight, he withdrew to his territory, seething and waiting for another to act against his liege. Similarly, Jan Kovachev resented the treatment and persecution his Highlander kin had faced during the war and its aftermath at the hands of King Guy, trapping him in an internal conflict between his loyalty to the legitimate authority and his relationship with his extended family and heritage. Lastly, Publius Bracchus, who had initially been a close confidante of the Savoyard monarchs, fell out of favour with Guy de Bar after their disagreement regarding offering clemency for the former Adrian rebels. Believing his former friend's intransigence had driven the country into stagnation, with approximately two-thirds of its population before the rebellion either dead or in exile, Bracchus placed his support behind the conspiracy after Guy's assassination. Rewarding Staunton with the ducal title he had always dreamed of, offering clemency to the majority of the former rebels and preaching the indivisible, unified and equal nature of all freeborn men, John Frederick managed to secure the support of these aristocrats.

On the evening of 10 Grand Harvest, 1526, a retinue of men (including clergymen Bishop Iosif and Bishop Renauld) led by Baldwin de Bar entered Praha Palace, the royal estate of the Ashford family and residence of King Guy, seeking audience with the monarch. In a matter of good faith to his nephew Baldwin, the pair left into the royal gardens alone, slowly trailed by the splattering of troopers and later joined by Lord Vanderus, son of Duke Titus. Being in the company of kin and clergymen, majority of the royal guards had left the gardens undisturbed and not monitored, allowing for the plotters to enter freely without molestation.

During the autumn sunset, the two clergymen Iosif and Renauld entered the gardens as the two spoke. When King Guy did not notice their entrance, the bishops quickly lurched towards the monarch with knives (having hidden them beneath their robes) and actively stabbed the king repeatedly.