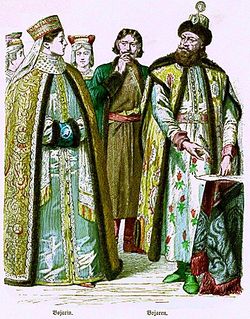 The Raevir (Raev: Raevir; Common: Raevir; High Imperial: Raevi; Savoyard: Raeve) were an offshoot from the original tribes of Harren, the son of Horen, who rose to signifgance during the continent of Anthos, beneath the Holy Orenian Empire. The raev found unity, after the bloody Elk Wars, under the leadership of of Karol the Raven, Prince of Raev. Following their migration and settlement under Oren, the raevir would rise to great heights in number and in prestige. Eventually, the culture was exposed to those surrounding it and defused into several different subcultures, namely the Siegradic and Adrian identities.

The House Carrion had a major political, cultural and military impact on Humanity and even the rest of the Known World. They heralded their legacy in Orenian Politics as the seemingly simple people of the Kraltan March. However, later as Apostolic Kings of Ruska, the culture found its purpose as the unifiers of humanity, under Exalted Siegmund I, following The Exodus.