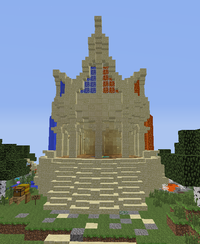 The Cloud Temple Of Aegis was the house of God and the home of the Monks of Aegis. It was widely regarded as the location of the most powerful magic in all of Aegis. All people were born here regardless of race.

When one was knocked unconscious or severely injured, the monks from the temple were quick to retrieve the body and take it to the temple for healing. Once the healing was complete, one would reappear in the Temple. The monks, much like those of the Wilven Sanctuary of Asulon, were skilled in healing even the most severe of injuries.

The Grand Library, located on the Temple grounds next to the race huts was a collection of books from all over Aegis. It was a place of learning and peace for all races. It's original curator and collection had disappeared long time ago and the Druid Order had stepped in to reopen the library. Efforts were taken to restore the collection to former glory.

No one knew exactly when the Cloud Temple was created, only that it was at the center of Aegis and the King's Road began off of it.

Battle of the Wandering Wizard

Following the success of the Champions in the Nether to seal away the Undead, Iblees let loose his wrath on the lands of Aegis. He destroyed the Cloud Temple in lightning, flame and monsters, including the rare dragons. With the fall of the final place of sanctuary all hope was finally gone for Aegeans, and they fled to the Verge to escape to Asulon.