Valera Alexandria (New Marian: Valeriya Aleksandriya) was the Grand Princess of Kusoraev, by marriage to the Grand Prince of Kusoraev and heir to the Haeseni throne, Marius II of Haense. She was to be Queen of Haense, as per the Crow’s Moot of 1701, to secure the Houses Barbanov and Carrion in matrimonial union. Though wed to the heir of Hanseti-Ruska, Valera never transcended to the position of Queen-Consort, due to her untimely death during the birth of her third child, the Prince Petyr Andrik Barbanov, in the year of 1706 - one year before her husband's ascension to the throne.

She was posthumously a core of the Varoche Affair, which revealed her alleged lineage as a daughter of an incestuous affair between the Augustus I, Emperor of Man, and his sister, her mother, the Duchess-Consort of Adria. Most of her life is renowned for being shrouded in mystery, lies, and rumor. In 2.A., the Varoche Affair was claimed as false by the Queen-Mother of Hanseti-Ruska, Viktoria of Metterden and declared Valera to be of true Carrion descent, though such continues to be widely disputed.

Valera Alexandria was born on the 4th of Sun’s Smile, 1686, to the parents Ratibor, Duke of Adria, and the Imperial Princess, Alexandria Horen. She, along with her twin, Paul, were the firstborn of the arranged pair. Valera’s childhood and adolescence was spent in the city of Belvitz, Adria in her family’s ducal manor.

In her youth, she would receive an immense education befitting a Carrion in playwriting, literature, but primarily music. Music was the highest of her intrigue, and she was tutored by the renown Timeo de la Baltas. Her father sought for her education to be immense as a lady of Adria. She also was educated in governmental and legal affairs in the duchy, as her father would bring her on many of the trials as a part of the jury. It was believed she was, at the age of six, a judge of the court as well per her father’s request.

She heavily lacked maternal influence and would often attempt to visit her mother in the tower in which she was believed to have been locked away in. After many failed attempts, Valera gave up on the aspect of seeing her mother and found comfort with her aunt, Vesna Carrion or Vesna the Older. Valera openly held a detachment with her siblings, save for her sister Mariya and her youngest brother, Fyodor, who she oft was given tutelage over. With Vesna, she attended duma and further introduced herself into the governmental side of life. 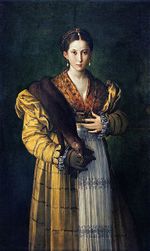 Lady Valera of Adria, betrothed of the crown prince Marius 1701.

Her witty and brash attitude was favored among the Adrians, but not her siblings. Her father would fail to contain her often pranking the guards or other members of the household. When said that she was ‘unladylike, untalented, and never to find a proper match in marriage’ by her brother Boris, she remarked that she had more talent in her smallest finger than his entire body. She did so in front of a crowd, in the imperial city of Carolustadt. Similarly with her twin brother, she showed a distance in relation. There was never an open dislike, but rather the two were hardly ever seen in the presence of one another.

Through sheer accident, Valera would meet the crown prince of Hanseti-Ruska, Marius Barbanov, and made near immediate acquaintances with the boy. It was then that she would visit the city of Markev in the Kingdom of Haense for the first time and many times after as the Carrions and their cadet house, Barbanov, started to reconnect. She was rarely seen in her birthplace at all after 1696 with the sudden announcement of the death of her father, after years of disappearance. Plans of connecting matrimonially were rumored as Valera and Marius grew closer, and were seen together more often than not.

At the Crow’s Moot of 1701, terms of marriage were brought into officiality as the Karovic houses agreed on setting a betrothal between Valera and the crown prince. The arrangement was praised by common folk and nobility alike, as it was regarded as a powerful match.

Valera was requested to live in the Krepost Palace once the betrothal was set. With her father gone and her mother declared as missing, she would accept the offer and suggest that her siblings do the same. Her brother, newly Duke of Adria, stayed in their homeland while her youngest brother Fyodor came with her to the Haeseni lands.

She struggled integrating into the court as many of the noblewomen were not as welcoming to her presence, including the Queen Elizaveta of Vidaus. The Queen of Haense detested the marriage, and schemed to break the betrothal that was set for her son. Valera, in return to the qualms the Queen openly held for her, began managing the courts in her place. She invited back banished courtiers, and specifically the scribe Swithun. Much to the Queen’s dismay, the wedding arrangements did not falter and the newfound scribe under Valera’s tutelage drafted up a public missive and wedding plans.

In the Crow’s Moot of 1701, it was decided upon and later announced the grand noble houses of Carrion and Barbanov would be joined together in matrimony, with the arranged marriage of Valera and Marius. Unlike most arrangements of such, the two were already known to be familiar with one another instead of first meeting upon the knowledge of their new situation together.

Within the following two months of the Crow’s Moot, the couple was wed. The wedding of the two Crows was grand and held within Markev’s chapel, and the service held by the Pontiff of the time. Hundreds were in attendance of the wedding, including the imperial family. Very few members of Valera’s family were in attendance—despite this, however, many other Adrians were crowded in the seats. The ceremony was concluded with a feast within the Krepost Palace of Markev.

King Robert I and his wife, Queen Elizaveta of Vidaus, were still in rule during the time of Valera’s marriage to the crown prince. With such circumstances, she was given the honorary title of Grand Princess of Kusoraev—a title given to those married to the crown-prince of Haense and upcoming Queen-Consorts.

Valera rarely came home or visited her siblings after being wed to the Haeseni prince, and instead found solace in attending church services and sermons for a considerable amount of time every day. Would there not be someone preaching the holy scrolls, she prayed in silence. Becoming the Queen of Haense and its responsibilities dawned on her greatly, leading her to turn to religion.

On the 15th of The Deep Cold, 1703, Princess Mariya Angelika was born. The child was named after her sister, whom she had yet to see in many years though missed dearly. Valera, despite her position and now first child with the soon King of Haense, had yet to adorn herself in a crown. She openly had refused to wear one, feeling that it separated her immensely from the people—especially when she was not yet crowned as queen.

Soon following the birth of her first child was that of Sofiya Theodosiya, her second. Seeing as she was yet to bear an heir for the kingdom, Valera’s stresses and worries increased immensely. The Princess-Consort turned to religion yet again as she had strayed from it when she cared for her first child, Mariya. She was seen reading the holy scrolls to her children every night before bed, and began speaking openly of a wish for the church reforms within Haense and a rebirth of the arts. She argued frequently that the Queen-Consort at the time, Elizaveta of Vidaus, had failed to keep the importance of religion within her own kingdom when it was so valuable and dire, and kept a cold and distant relationship with the royal.

Valera never transcended the position of Queen-Consort of Haense, due to her early and sudden death on the 17th of The First Seed, 1706. In the days before, Valera had been bedridden and pale, seemingly weak. Despite such, she stayed by her husband’s side for as long as she could. She died in childbirth of her son, Petyr Andrik, and was unable to give an heir for the kingdom. Later in the day, the infant passed as well due to his unsurvivable conditions.