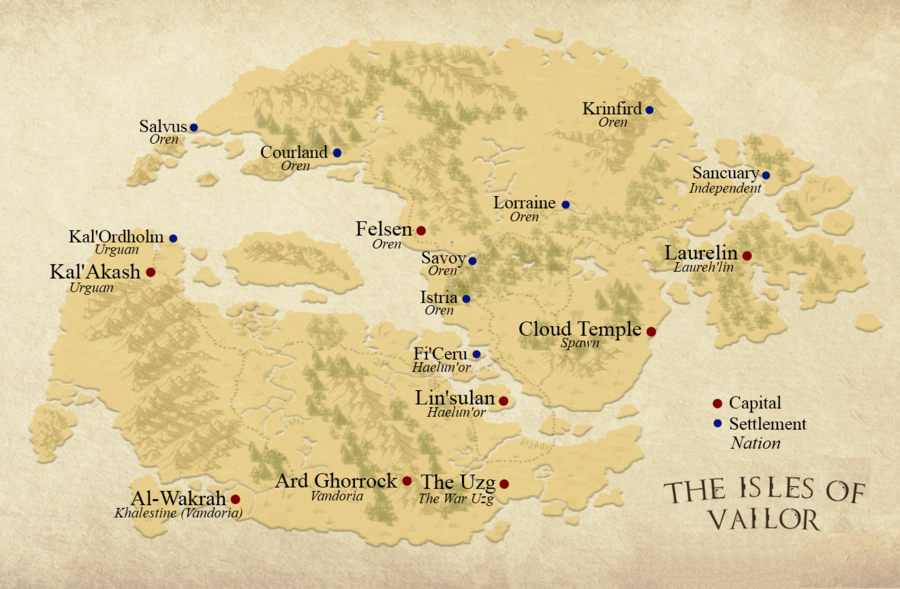 1513: The descendant races arrive in The Isles of Vailor after leaving Athera.

1516: The Massacre of Wett, otherwise known as the Redmark Massacre takes the lives of August de Montfort, Johann and Kozlovskii Vladov, the incident sparks rumors of an imminent civil war within the Reformed Kingdom of Oren. The Grand King of the Dwarves, Balek Irongut, is lost at sea on a mission to kill the Devourer.

1518: The Ducal Coalition, headed by Hugues Sarkozic, declares a war of rebellion against the Reformed Kingdom of Oren - this would come to be known as "The Dukes' War". Skippy Irongut wins the Dwarven election, becoming the Grand King of the Dwarves. A group of dwarves, mainly Frostbeards and Blackfists, rebel from the Grand Kingdom of Urguan, forming a rebel government labeled The Mountain Monarchy. The High Pontiff of the Canonist Faith, Sixtus III, is assassinated alongside of the Lord Justicar of Oren, Adam de Gleveisen.

1521: The Siege of Barrowyk concludes on the 13th of the Grand Harvest, seeing its Adrian defenders slaughtered by Loyalist forces. The Grand King Skippy Irongut of the Grand Kingdom of Urguan has his coronation, officially becoming the King of the Dwarves. The Dukes' War ends with the Crown crushing the rebellion.

1522: The city of Kal'Akash was attacked by unknown entities aiming to destroy the city.

1523: The Grand Kingdom of Urguan's Skippy Irongut and the Caliphate of Khalestine's Faiz Kharadeen sign The Alliance of Sand and Stone. Olivier de Savoie, the King of the Reformed Kingdom of Oren, dies. Guy de Bar - the then Lord Chancellor and Duke of Drusco - succeeds him.

1524: The Aeroch Nor Scions, the Dwarven Legion, the Ivae'Fenn, and the Horde of Dunamis band together in defense against an apparent raid from Shreck'Lak's warband. A volcano releases great amount of ash into the skies after an elf threw a magical orb into it. The sun was not seen in Vailor for one year.

1525: Grand King Skippy Irongut is assassinated by an assassin of Dark Elven race, contracted by an unknown dwarf. Nominations for Grand King begin in the Grand Kingdom of Urguan, notable nominations being Uldar Irongut, Duren Hammerfist, and Demagol Doomforged.

1526: A Plague quickly spreads across Vailor. Guy de Bar, the King of the Reformed Kingdom of Oren is assassinated. John Fredrick Horen is then declared Emperor of a new Holy Oren Empire (different to the one of two centuries ago) by the Church of the Canon. After a short conflict between Savoyard and Imperial forces, the Treaty of Metz is signed. Uldar Irongut is crowned Grand King of the Dwarves after the recent election.

1527: Aeroch Nor is vassalized peacefully by the new Holy Oren Empire as per The Treaty of Erochland on the 11th of Malin's Welcome, 1527. The Southern Vailor Coalition is disbanded after the loss of Aeroch Nor and feelings of disloyalty. The Iron Uzg begins advancing towards the Princedom of Fenn as an act of retribution to prior threats.

1528: The Iron Uzg wins against the Ivae'Fenn outside their city, and prepare to siege Tar'sil, the Princedom's capital. The Imperial Emperor of Oren, John I Frederick of House Horen signs the Treaty of Fenland with Grand Prince Aelthir Tundrak.

1529: The Princedom of Fenn with Dunamis support bests the Iron Uzg in a siege against the Princedom of Fenn's capital. Uldar Irongut steps down as Grand King of Urguan before abandoning the city - he appoints Gauldrim Irongut as his Lord Regent. The Dwarves stage a coup against Gauldrim Irongut, and put Midgor Ireheart into power and later make him the Grand King of Urguan.

1537: The Orenian Empire besieges the dwarven fort Rhewengrad. Urguan and Dunamis fight together to defend the Keep but fail. The dwarven Fort falls within hours.

1538: The Orenian Empire after the crushing victory against Urguan marches on the dwarven fort Khro'Nogaak. After days of fighting, the Orenian forces are unable to occupy the fort and retreat.

1540: After the defeat at Khro'Nogaak, the Orenian forces march on Avar, after winning a sea battle against Urguan. Without much resistance they reach Hiebenhold 2.0 and besiege it. After many hours of fighting, the dwarven forces are unable to keep the Fort and soon the Orenian forces occupy it.

1541: With the recent victory at Hiebenhold 2.0, the Orenian forces lay siege on the last dwarven hold of Urguan on Avar, the Grandaxe Keep. The siege lasted for months as the dwarven forces used explosive arrows to halt the Orenian forces. Despite all the effort of the defensive side, the Keep falls.

1542: The Kingdom of Urguan and the Konigsreich of Vandoria join forces and form the Empire of Vanderguan. The Orenian army after occuping Avar decides to march on Kal'Ordholm. The siege was bloody and lasted months but the Orenian forces didnt manage to breach the Keep and after suffering from the arrows of the defenders, they decide to retreat.

1547: The Empire of Vanderguan splinters and collapses after mere months, with the independent Kingdom of Vandoria rising from its ashes, encompassing the former lands of Vandoria including the Caliphate. Hostilities also begin to wind down on the warfront in the south, with both sides being exhausted by the war.

1562: The Kingdom of Courland separates from the Holy Orenian Empire, beginning a brief civil war.

1571: The descendant races leave Vailor and arrive in The Isles of Axios

Nature of the Realm

Official Nations of The Isles of Vailor

Cities and Settlements ' (Capitals of major nations are marked in bold, while ruined towns are italicized.)