From Lord of the Craft
(Redirected from Sofiya of Haense)
Jump to: navigation, search

Princess Sofiya Theodosiya (11th of The Deep Cold, 1706- 16th of The Amber Cold, 1741), otherwise monikered as Sofiya of Reza or Sofiya the Frail, was a princess of the Kingdom of Hanseti-Ruska and member of the royal house of Barbanov. Sofiya was born as the second daughter of King Marius II and his first wife, the late Valera Varoche. The princess briefly served as the chamberlain of Hanseti-Ruska, appointed under the Royal Council of Queen-Consort Milena Ekaterina, though later becoming the Grand Princess of Muldav via marriage to Kazimar I from 1729-1741, though infamously divorcing him after the dramatics of his family became too much for the weak-willed princess to bear.

On the 11th of the Deep Cold in the year 1706, Princess Sofiya Theodosiya of Haense was born the second daughter of Grand Prince Marius of Kusoraev, future King of Haense, and his first wife, Valera of Adria, who died delivering the heir to Haense, shortly before the boy himself succumbed to death. Valera's death as well as the post-humous discovery of her incestuous Horenic lineage in the Varoche Scandal was remembered in Haense for causing a period of dread in the palace.

This dread perpetuated in Sofiya and her elder sister Mariya throughout their childhood. They grew to become spiteful as a result of their mother's death and father's disattachment due to grief. The two sisters developed a tumultuous relationship, Mariya being brash while Sofiya was timid yet pompous. Sofiya, from the age of 5, began to enclose herself in the tallest tower of the Prikaz, not allowing others to see the weakness of her tears, something she'd frequently been scolded about by the venomous Aleksandra Ruthern, then Seneschal of the Kingdom. Aleksandra disallowed servants from entering Sofiya's room for fear of reconciling her tantrums of anger and sadness, one recounting that "the poor princess can heal with love, but our chamberlain is right to attempt to strengthen her heart for the future." However, the stone face of the haeseni only betrayed Sofiya in her youth, pushing her away from normality by disallowing her the comfort of love. 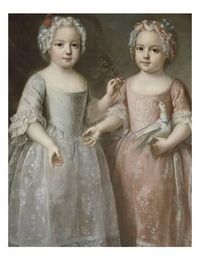 The young Mariya and Sofiya in vestal robes. Art by Pierre Gobert.

The last straw was pulled when Sofiya, aged 10, witnessed her father burn down the entire city of Ves and it's occupants beside Emperor Antonius. She'd seen the ashes of a city hundreds of miles away floating in whisps around her bedroom window, and declared that she'd no longer bear the grief that her family pressed onto her, planning her departure for the continent of Aeldin. Without so much as a goodbye to her half-siblings, step-mother, father, or even her sister, Sofiya boarded her father's royal ship, The Ingrid, and sailed to the court of the aeldinic Kingdom of Banardia.

Return to the court of Andrik III

After her half-brother Andrik III,(the new King of Haense)'s wedding became known to the land across the sea, Sofiya set sail to return to Haense at the peak of her 19th year. The Haeseni princess resided in Aeldin from pre-pubescence to young adulthood, becoming adapted to Banardian decorum excepting a subtly haeseni pattern of speech. Her shyness had since faded in order to survive the competitive nature of the Banardian court, yet her imperious and rotten attitude persisted regardless of any attained charisma.

Upon arriving, she was immediately greeted by her new sister-in-law, Milena Ekaterina, who she bonded with quickly due to their common aeldinic upbringing, which would urge Milena to appoint Sofiya as the chamberlain of the palace. An incident occured after Sofiya attended her first court session, in which she reprimanded a rude girl to no avail, only to later find out that she was the youngest daughter of the now deceased Aleksandra Ruthern, whom Sofiya had since grown to despise. She then met Aleksandra's son, Vladrick, and confronted him about his sister and horrible mother, only to be threatened with death, something she made light of by returning his anger with jokes. Through their mutual humor as well as his apparent betrothal to Mariya (who Sofiya did not see for another year), they’d amend their hateful relation, which would lead Vladrick to introduce Sofiya to his older brother, Kazimar, the Grand Prince of Muldav.

Sofiya and Kazimar hit it off quite well initially, perhaps due to his desperation in seeking a wife: a result of various failed betrothals, as well as his curation of a scandalous bastard daughter, whose mother had died not long after her birth. Kazimar would request Sofiya’s hand in marriage shortly after they met, issuing the matter of their marriage to her brother, King Andrik. He accepted, pleased to have his sister potentially marry a vassal of his own. Kazimar, wary of the existence of his bastard, waited to present her to Sofiya, but on the girl’s 5th birthday they both travelled to where the girl’s mother had been living before her death, a bleak desert nation by the name of Thyra. Sofiya was unamused at the surroundings, but was happy to usher the young girl away from an unhappy life, as she knew she couldn’t bear to see another girl suffer the same fate she did in her youth.

They were married on the 14th of Sun's Smile, 1729. It was suspected by many that the reason for their hurried wedding ceremony was that Sofiya had become pregnant out of wedlock, though none could be too sure on the validity of the rumors. Their first daughter, Maya Valeriya, named for her deceased grandmother, was born 8 months following their wedding in suspected prematurity.

Re-emergence of the Duchy of Adria

Sofiya met the newly risen Duke of Adria, Adrian Sarkozic, via letter, when he asked for her advice on who he should marry. She heinously suggested her sister, knowing that Vladrick had already affirmed their betrothal. Adrian, eager for a Barbanovi alliance, prepared a meeting with Sofiya and Mariya, that was held in the palace of Haense. In this meeting, Sofiya cruelly petitioned her sister to leave Vladrick, spiting his emotions. When Mariya agreed, Sofiya saw no remorse in her two-faced actions.

Due to her sister's new marriage, Sofiya frequented Adria while it re-emerged into a militarized city, inviting her husband Kazimar as well as various other haeseni to crowd the newly erupted streets of the city Renz. Sofiya became an advocate of Adrian's schemes, even participating briefly as a devoted steward of both Haense and Adria. Sofiya's fun would die quickly though, as her second and third children, who came in the form of twins, came to her with much difficulty, forcing her to reroute herself in Haense and continue there with little movement. When the pair were born, they were styled with the usual haeseni naming devices, being christened as Karina Sofiya and Dimitri Stanimar.

Strife with the Alimars and mental deterioration

Throughout her marriage, Sofiya had encountered continuous turmoil, brought on by a general disliking of the militarized haeseni people, who she often compared to the docile and socially-driven Banardians of her youth. When her children were finally of age to adapt to the culture of Haense, Sofiya felt alone in a land of people she did not understand. Her mind began to collect the burdens of her youth with the burdens and tumult of the present, concocting a dangerous disorder brought on by stress and underlying factors of a troubled youth.

Sofiya began to reason that her children- as well as herself- were cursed by the incestuous blood of her deceased mother. She went so far as to tell her sister Mariya about a prediction she had that Sofiya herself and her children were corrupted, and that she would die beside them just like their mother died. Mariya, thinking this the ramblings of a crazed woman, slapped her in front of various gathered Alimars, leading to a huge family fight atop the Bridge of the city of Helena, which they had been visiting at the time. This was, as recounted by Sofiya's biased journal writings, the first instance of the Alimar family in full insanity. 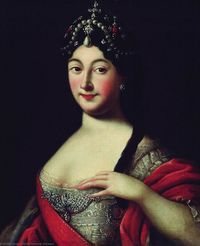 A painting made in the new "rougher" style of the haeseni, as commissioned by Andrik III. Art by Aleksey Antropov.

There would be many more cases of an Alimar family in discourse, as it happened endlessly and loudly. These occurrences were far too frequent for Sofiya to bear, driving her to distance herself from the family as a whole. Her daughters, which had developed as full-fledged ladies of Haense in their booming and defensive demeanors, lacked a present mother, which would only worsen the family's condition. All of this would come to finally weigh down on Sofiya when Vladrick somehow learned of the true nature of Mariya and his separation, and Sofiya felt the full effect, as Vladrick made her his sworn enemy. They'd only beef out their issues when Sofiya cornered a drunken Vladrick in the streets of Haense and force him into a fight on the basis that she was "tired of his games". The two would end up hugging instead, though the wound that festered Sofiya's insanity was only further ruptured, and on that day she reflected on her recent decisions. She came to realize the extent to which her mind had depleted, and she decided that she'd had enough.

Sofiya issued her divorce papers to Kazimar on the 10th of The First Seed, 1741, within the Cathedral of Old Reza, while additionally declaring that she'd return to Aeldin wether he accepted or not. She'd give him the reasons in an emotional display, stating that the tumultuous state of the Alimar family had caused her mind to fall to shambles, and placing the blame all on him. It was in this moment that Sofiya's true nature as a woman of weakness became evident. She was the first person to run when things got too difficult, yet she'd never admit her weakness, because she was too proud, and too avoidant.

Kazimar signed the divorce papers the 13th of Godfrey's Triumph in the year 1741, in the Ekaterinburg Palace of the city of New Reza.

Whilst on travels to collect her things before her embarkment to Aeldin, Sofiya was stopped in the Province of Rubern by a halfling bandit named Muppy Goldfoot, who noticed the true worth of the jewels she adorned; She was murdered in cold blood by the halfling, who later sold her jewelry and dress for the minuscule value of two thousand minas. Her body was not found for another two years, when a band of orenian goldminers discovered her skeleton sunken beneath the rocks of Lake Milena. It's identity would only be realized by an ex-servant of the royal family of the Prikaz, who went simply by the name Marjorie. No funeral was held.