Robert Barbanov, (9th of Snow's Maiden, 1666 - 10th of Sun's Smile, 1707), also regally known as Robert I, was the twelfth King of Hanseti and Ruska following the death of his father, Siguine I of Haense.

Robert was born in the 9th of Snow's Maiden in the year of 1666 in Krepost Palace in the city of Markev to King Siguine and Queen Sophia of House Chivay. He would weave his way throughout his toddling years with ease, though once he reached the age of five he would be put under the tutelage of his grandfather Prince Robert Sigismund and later on was taught by the Prince of the Count of Metterden at the time, Rhys var Ruthern. Whilst under his grandfather, he mastered the arts of diplomacy and delegation, along with grasping his family's winding past. Under the Ruthern Patriarch, Robert was tutored in the study of wielding a sword. 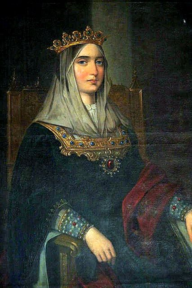 A Royal Painting of Queen Elizaveta of Vidaus, circa 1692

On the summer of 1682, the then King Siguine, had been slain during a hunt in the Czena forest southwards of Markev. The young Princeling remained in his chambers for three days in mourning of his father, such prompting the beginning of his kingly duties. He would then be crowned on the 9th of The Deep Cold of the year 1682 at the age of sixteen.

While growing up with both his family and the ducal family House Ruthern due to his studies. Robert would become friends with Rhys's granddaughter, Lady Elizaveta vas Ruthern. The pair would be seen talking to one another, becoming close in the process. As time went on and the death of King Siguine became apparent to the general public on the year of 1682, Robert's grandfather had taken notice of the two throughout the years of observation as they sneaked out to talk privately. Within a few months, Prince Robert Sigismund would arrange a marriage between the two who were then married the following year in 1683.

At the beginning of Robert's reign, he'd begin to do a clean sweep of the Council reforming the old government to which he would begin to appoint those who were worthy of such position. Once accomplishing such goals Markev would begin to slowly regain to its former glory as many events would be held within the city. With Robert assisting on Markev prospering like it once was along with working with his newly formed government a man by the name of a family who was once around within the Kingdom of Haense, Henrik Kovachev, who had arrived back in Haense bending the knee to the King regaining his family title as Duke of Carnatia.

Despite Robert's peaceful reign thus far he would begin to hear a sight of a rebellion which Robert would become furious as they were people his father trusted. As a few days passed Robert would order one of his Captains to rally a raiding party towards Arberrang to negotiate for their surrender. Upon the negotiation, Robert's captain along with the retinue would have been slain by the Nordengradic people led by the new Earl, Torsten I Rosik who had rallied against Robert.

After the loss against Arberrang and Nordengrad, Robert would begin to join in on meetings with Prince Augustus I and Prince Cassius Horen for the conquest towards Nordengrad and Arberrang. Three years would pass before Nordengrad and Arberrang along with their allies would be trampled upon by Robert and the Empire of Man's armies. Following this, the land was returned to the House of Baruch in good faith, as the Arberrang menace had used deceit and intrigue to take the land years before. Thusly Robert would be known by his people as Robert the Kind.