The capital of the Kingdom of Haense, Reza (High Imperial: Rasia, Raevir: Reze, Hanseti: Reza) acts as the epicenter of administrative and diplomatic affairs of the kingdom, and is populated by Northerners and Highlanders of all descent. The city is the seat of the House of Barbanov, who reside in palace of Prikaz in the easternmost district of the city. The city is a paramount site of acitivity within the Kingdom of Haense, and is the most frequented settlement of any in the nation.

The city is named after the first Queen-Consort of Haense, Reza Elizaveta of Turov. 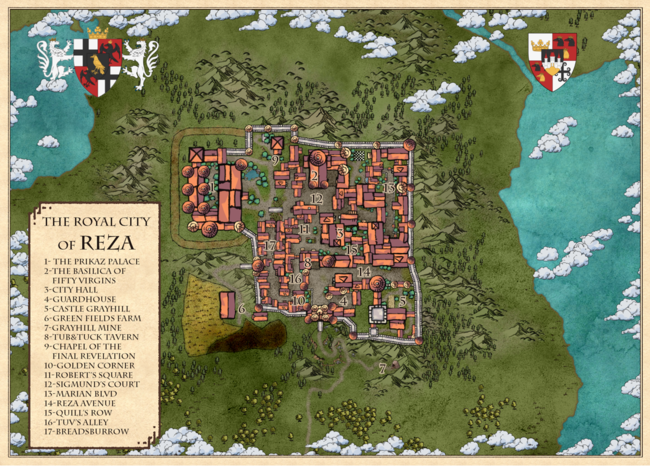 Layout of the Royal City of Reza, circa 1712

The Prikaz is the palace of the ruling family of Haense. Currently held by House of Barbanov and its current patriarch Marius II of Haense. Situated in the northwest of the city the palace was constructed as a major landmark and is the 2nd tallest building in Haense after the Basilcia of Fifty Virgins.

The Basilica of Fifty Virgins is the Cathedral of Haense.