Prince Antonius of Renatus-Marna (1636 - 1725) was the second eldest son of Aurelius I, Emperor of Man. He went missing before his father's abdication and thus never became Emperor of his father's land. His son, Augustus I, would succeed to the throne instead. Antonius nevertheless earned distinction as one of the most successful Renatian commanders throughout the Kingdom, being regarded by his contemporaries as a model of chivalry and one of the greatest knights of his age.

In 1652, he was appointed as the Grand Marshal of the King's Renatian Legion, and ordered to lead the Renatian army against the Czena Confederation, during which he plundered Markev with an army of 20,000 strong against the numerically stronger 50,000 confedaration warriors. Several similar skirmishes would follow on after the successful renatian raid against Haense, causing the collapse of the Czena Confederation itself. Despite the collapse of the confederation, Prince Antonius and his father saw it fit to continue their war against the Kingdom of Haense, officially marking the start of the Atlas Coalition War. In 1660, Prince Antonius commanded the right flank at the Battle of The Rolling Hills, his father intentionally leaving him with the majority of the Renatian forces to win the first major battle in the Atlas Coalition War. He continued to take part in Aurelius I's campaign against the United Southern Alliance.

Antonius, the second eldest son of Aurelius I and Queen Theodosia, was born at Doggersden in 1636. His father two years later, declared himself King of Renatus and led the Coup of Adelburg, removing Emperor John VI and dissolving the Holy Orenian Empire. The dissolution of the empire created a rivalry between two claimant factions within the House of Horen, the Horen-Pertinax branch and the Horen-Marna branch, leading to a skirmish between the two factions within the delapadated walls of the City of Bastion, the former capital of the Kingdom of the Westerlands, ending with a Renatian victory.

In 1652, Aurelius I created the Prince as Grand Marshal of the newly formed Royal State Army of Renatus-Marna. A year later the prince was called upon to furnish troops within the Renatian-Marnantine lands for an impending campaign into Haense against the Czena Confederation.

Antonius, Grand Marshal of Renatus, set forth from the City of Senntisten at the head of a 20,000 strong army, made primarily up of Renatian landsknechts, burning and ravaging the Hanseti as he went, distinguishing himself at the Sacking of Markev were the numerically disadvantaged 20,000 man renatian-marnantine force decisively crushed the 50,000 led Czena force.

Antonius marched with King Aurelius I eastwards to the Norlandic city of Ruriksgrad in the month of The Grand Harvest 1660 where their advance was eventually halted by a United Southern Alliance comprised army at the Rolling Hills in Norland.

On the 20th of the Grand Harvest, 1660, Antonius took command of the right flank of the army with Ser Konrad Nzech, at the head of one thousand six hundred men-at-arms, two thousand archers and four thousand Renatian Landsknecht's. When the Southern Alliance's troops were discomfited atop Mole's Hill, by Northern Atlas Alliance Archers, the Prince charged the right flank of the Renatian-Marnantine allied forces towards the weakening Nordling-Hanseti frontline atop Mole's Hill coining this attack as the Mole's Hill Massacre; at the same time Aurelius I charged the main body of the left flank towards the anti-renatian centre. 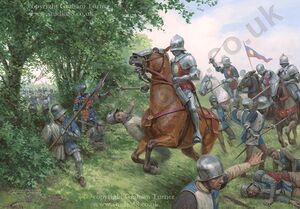 Prince Antonius charging forth towards the Norlandic lines, 1660

The frontlines of the Norlandic led army utterly broke as both father and son smashed through their wavering lines, with Godden I and Karl II sounding a general retreat from the bloodied Rolling Hills. When Aurelius met his son after the battle was over, the young prince conceded to his father on plans to continue their aggression into United Southern Alliance held territories.

When Aurelius I was determined to pursue the war with the United Southern Alliance in 1661, he ordered Prince Antonius to lead the Renatian-Marnantine army further into Norland held territory. He continued his march onwards from the Rolling Hills accompanied by Ser Konrad Nzech, plundering and burning the Norlandic lands as he went. Meanwhile, King Godden I was gathering a large force at Ruriksgrad, from which he believed he would be able to defend the passages through the Forkwoods. On 6th Grand Harvest, 1661 the Renatians preceded to march through the Forkwoods, meanwhile on 7th Grand Harvest, 1661 King Godden, who had now gathered a large force as many as 20,000 Norlanders, Hanseti and High elves combined, marched out from Ruriksgrad's walls to halt the Renatian-Marnantine advance.

When Prince Antonius knew that the United Southern Alliance army lay between him and Ruriksgrad, he took his position.