Philip Amadeus Novellen (15th of Horen's Calling, 1815 – 5th of Malin’s Welcome, 1868), regally known as Philip III is the eldest son of Prince Philip Aurelian and his Sarkozy consort, Amadea of Pompourelia. In 1836, he was granted the titular Duchy of Furnestock which he later turned into a landed domain in foreign lands later that year after departing from the Holy Orenian Empire. Later in 1849, Philip returned to Almaris and made a bid for the Imperial throne. After successfully overthrowing Emperor Philip II, Philip Amadeus was crowned as Philip III by the High Pontiff. However, he is most well-remembered for his continuation of the Urguani-Orenian War.

The first child of Prince Philip Aurelian of the Holy Orenian Empire and his first wife, Amadea of Pompourelia, Prince Philip Amadeus was born on the 15th of Horen's Calling, 1815, in the Imperial Augustine Palace and was baptized that evening at the Basilica of Providentia. At birth, he assumed the 3rd position in line for the succession of the Empire behind his father and grandfather, Philip II, and was hailed as the future emperor. His birth came about after a lengthy period of infertility by his mother, leading to celebrations and rejoice as she was proven fecund.

Philip was joined by several siblings in rapid succession, a majority of which bore the controversial Novellen red hair, borne from continued cousin marriages. Sources gave evidence of Philip's uncanny similarity to the appearance of Empress Anne. However, he was pale to a fault, with Horen-grey eyes carrying little saturation. The Haeseni ambassador to Oren noted his appearance in his 5th year as being overwhelming of the brawn necessary for his position, with a reckless jester's personality to match. The boy was an absolute scamp, frequently playing pranks on the courtiers of the palace, including bringing a hive of bees in a box to a garden party held by his sister, Princess Amelia. He was hardly scolded for his performances, and the general air of the court carried that the imperial family was incapable of fault, so long as there was an adherence to the Emperor, John VIII's, regulations.

Marriage to Anastasia of Kositz

Attention was paid to Prince Philip's betrothal around his 10th birthday when John VIII began to search for favored candidates from among his immediate peers to reward with a daughter as a future empress consort. He gave particular preference to the celebrated General of the Imperial State Army, The Count Erik Ruthern of Kositz. The Count's firstborn grandchild was Lady Anastasia Victoria Helen Ruthern, a pious and vehemently raev-cultured girl under the tutelage of various holy women of the canon. John would arrange a meeting with the Count in 1828. Attending servants rumored that he disliked her religious fervor but was interested in her sharp wit and unafraid tongue, as he voiced that it would act as a good contrast to Philip's rambunctious attitude. He sent a letter of approval to the count the following month, and the future marriage was assured in the Imperial Betrothal of 1829 [2] when Philip was 14 and Anastasia 11.

Philip and his betrothed would see each other only on her infrequent visits to the Capital for the next 7 years, but their relationship was said to be cordial when present. However, The Princess Claude of Savoy, Anastasia's premier friend, revealed his distaste for her forthrightness in the social season of 1835, having overheard his lamentations about needing a docile wife and other reckonings. It seemed, though, that he would eventually introduce Anastasia to his agenda of liberation from the "imperial monotony", as he was quoted as calling it, for they would be seen in perfect harmony with each other as their marriage date drew closer. The common courtier would've noticed their mind as being molded of the same material, their philosophies on life becoming a singular idea. This attitude would remain for their entire lives onwards, their future reign as Emperor and Empress being similar if not stronger in unity to that of the Dual Monarchy of Empress Anne and Joseph.

Their wedding, an event now revered in legend, would come on the designated year, 1836, at the very end of the Social Season. The ceremony began at the Basilica of Providence and followed into the imperial gardens, where hundreds of guests poured in to bestow their gifts to the pair, ranging from a pair of treasured white Savoyard steeds to a title for Prince Philip as Duke of Furnestock. The wedding was followed by a grand imperial festival that stole the attention of all city dwellers for the next year in celebration of the Prince and his Princess.

During Philip and Anastasia's wedding festival, there was a notable lack of their joined attendance, one being absent more than the other: Prince Philip. The reason behind such was gossiped about to no end, until that fateful day, just 2 months after the wedding, when a missive was in circulation, detailing the abrupt and permanent departure of the Duke and Duchess by ship, with former Archchancellor Franz Nikolai de Sarkozy onboard. It was then that maids of the Augustine Palace discovered extensive plans for a colony beyond the stretch of Almaris scattered about the Prince's drawers haphazardly. This colony would come to be known as the Free City of Ulyssa. 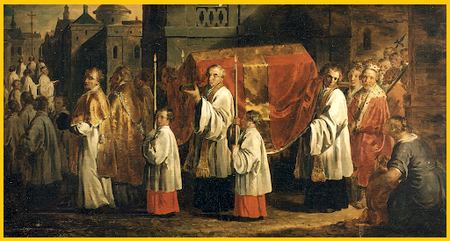 The Procession of Furnestock, otherwise known as the funeral of what was thought to be Prince Philip Amadeus, now known to be a sickly Ulyssan boy of similar stature. [1]

Their absence was felt deeply, spinning the empire into a succession crisis. The following year, Emperor John VIII succumbed to illness, and Philip's grandfather, Philip II, succeeded the throne. Among one of Philip II's first demands was in the form of a contract against Prince Philip that entitled the empire to any children sired by the Duke & Duchess in their new colony. Philip had no choice but to accept. In the next thirteen years, five of their future eight children would be sent to join the court of the empire in one trip known as the Procession of Furnestock. They would be: Princess Catherine, Princess Julia, Prince Peter, Princess Victoria, and Prince James. Ensuing, Philip and Anastasia would welcome the births of Princess Anna, Prince Frederick and Princess Lorena, the first two returning to Oren with their parents and the final being born in the purple.

The initial return of the five Prince and Princesses was a somber event. With them, they brought the casket of what they said was their father, to be processed through the streets of Providence for a funeral. Two months prior, Duchess Anastasia had written to the Emperor that her husband had suffered an untimely demise and that she was pregnant with their next child (Princess Anna) and would be sending it to the capital when it reached the age of 5, as the death of her husband could only be tamed by a child's love. In truth, the body they sent with the casket was the body of an ailing Ulyssan boy that had died of illness. When later asked about why he committed to faking his death, Prince Philip described that he wished to sever ties completely from Oren and have the people forget of his existence, allowing his future as Lord of Ulyssa to be independent of his imperial status and that no more of their children would be taken from them.

Return to Oren; The Aster Revolution 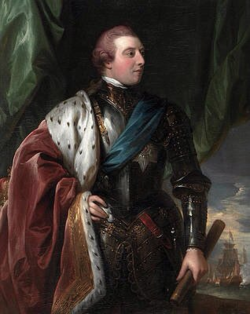 Continuation of The Urguani-Orenian War