Philip Frederick, known as Philip I (High Imperial Philippus Fridericus; Savoyard: Filipo Frederic; Hansetian: Philipp Fredek) (26th of the Amber Cold, 1571 – 25th of Malin's Welcome, 1595) of the House of Horen, was the sixth Holy Orenian Emperor of the Fifth Empire. He was the thirdborn son of John III to his wife Julia of Furnestock, and came to the throne at the age of fourteen. He was the fourth and final emperor who came to the throne during the crisis known as the Year of Four Emperors. 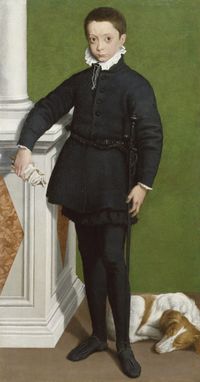 Coalition War and Fall of the Empire

With the inner turmoil of multiple human clans turning their backs on the Emperor (more specifically, familes of Ashford and Staunton, Philip was left to deal with a growing rebellion only shortly after his coronation. The issues with were planted in the times of his ancestors began to surface, and the third son raised monarch was left divided in both power and support. His drastic execution of Duke John Renald of Savoy would trigger a massive explosion of anti-Imperial sentiment (backed by the disenfranchised Dwarven nation) and soon minor lords began declaring open rebellion, supported financially by the former dukes of Savoy and Courland.

At first seen as a minor insurgency, the tides would turn at the disastrous Battle of the Gorge

After numerous bloody battles and defenses, Philip foresaw his Empire's eventual demise as the enemy drew near to the heart of Oren, eventually arriving and beginning the Siege of Johannesburg. In an act of defiance, he denied the Coalition the satisfaction of capturing the capital, Johannesburg, and instead detonated a massive Thanhium explosion - ending both the city's existence as well as his own, in addition to being a symbolic ending to such a long lasting Empire. Imperial loyalists viewed this as an honorable and defiant way to end the conflict while the Coalition viewed this as a petty and cowardly action.

Philip Frederick married Adeline Augusta de Savoie, sister of Duke John Renald of Savoy, to which he had three sons and one daughter with. After his death, majority of his children were sent into exile save Prince Peter, who ruled as the Duke of Mardon. His children returned when his eldest, once known as John Frederick, returned and restored in the Imperial Throne in 1613.