Otto Georg, canonized as Saint Otto II of Haense (High Imperial: Otto Georgius; Hansetian: Otto Georg) was the seventh King of Hanseti and Ruska of the House of Barbanov, following Stephen I's death without a son and Otto I's sudden abdication in 1624. Despite the decline of the kingdom during his rule on Axios, he is largely known for his establishment of the city of Markev in Atlas and its subsequent rise to become one of the continent's most successful cities.

Otto was born in the royal city of St. Karlsburg, the son of Otto I (Prince Otto Henrik at the time), brother of Marius I, by his wife Catherine of Carnatia and baptized at the Cathedral of the Three Saints. He was raised primarily by his mother, due his father’s involvement in the many wars of the Fifth Empire, and would spend most of his youth drinking and fighting with the guards of the realm. At the age of three, he and his family were forced to flee after the Kingdom’s loss in the Great Northern War. For the rest of his youth, he took refuge in the southern Kingdom of Mardon where the King Peter Sigismund, later Emperor Peter II of the Holy Orenian Empire, provided shelter and safety.

At the age of ten, he and his family joined their cousin Stephen after the latter’s victory in the Greyspine Rebellion and his election as King of Hanseti and Ruska. The plight of the highlander people following their loss in the Great Northern War and their subsequent exile had profoundly impacted Otto’s conscience, and compelled him to forge greater ties with the citizenry of the Kingdom upon his return to the north. Albeit being a prince, he was often found fraternizing with the common man in taverns, or practicing his swordsmanship with the town guard. In 1621 he was married to Eleanor of Lotharingia, sister of King Hughes of Lotharingia, as part of an arrangement between the two Kingdoms.

Stephen’s sudden death in 1624 to an unknown disease without any heirs prompted the line of Otto Heinrik (the Elder) to ascend to the throne. Otto I had no stomach for the throne however, seeing how it wore down on his brother and nephew and the responsibilities that came with 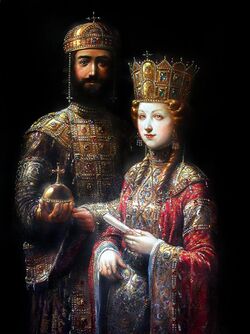 "King Otto and Queen-consort Eleanor" (circa 1627), by Elizaveta Juliya Barbanov. This portrait was gifted to the royal couple on the day of their coronation by Otto's younger sister, Elizaveta. The artist had made a point to depict her brother holding an orb surmounted by a cross, in order to showcase his piety. Modern historians believe that this painting foreshadowed Otto's future sainthood.
it. After two weeks of prayer and meditation, the father abdicated the throne to the son, and Otto II was crowned King with the support of his nobles and the Church.

Shortly after his accession, Otto II was forced into a war against the warrior House of Romstun, traitors who had rebelled against Emperor Peter II. The short war would bring an unexpected number of losses to the Kingdom, primarily in councilors and noblemen who had served Stephen faithfully. By the end of it, Otto found himself ruling a kingdom largely on his own without a mature noble class to sit on his council. Despite his best efforts, the Kingdom began to decline. Soldiers retired or deserted, citizens emigrated to the new Imperial capital of Adelburg, and the nobles were too young and inexperienced.

In lieu of the times, Otto faced sobering realizations that in order to provide for the benefit of his kingdom, what was required was a personal undertaking of the reins of regal leadership. Personal invitations to potential citizenry, meetings with individual army recruits, all meant to provide a sense of belonging and purpose for all in the Kingdom. For a time, the policy worked. The population of Alban began to grow slowly, and the army had a decent number of soldiers. A series of wars and skirmishes would diminish popular support for the King as the casualties rose.

The kingdom would remain in a rut until the exodus to the new land of Atlas, upon which Otto consecrated a small plot of land to serve as the location of the new capital, Markev. The design of the city along with the speed with which it was built prompted a mass migration of people into Markev. The population of the Kingdom rose, along with the size of its army. The nobility had matured over time, and Otto found himself with a fresh group of smart and able councilors.

As the Kingdom grew more prosperous, Otto's own health deteriorated. A great cough overtook the old King and he passed in the year 1644. His remains were buried in the Royal Crypt beneath the city of Markev.