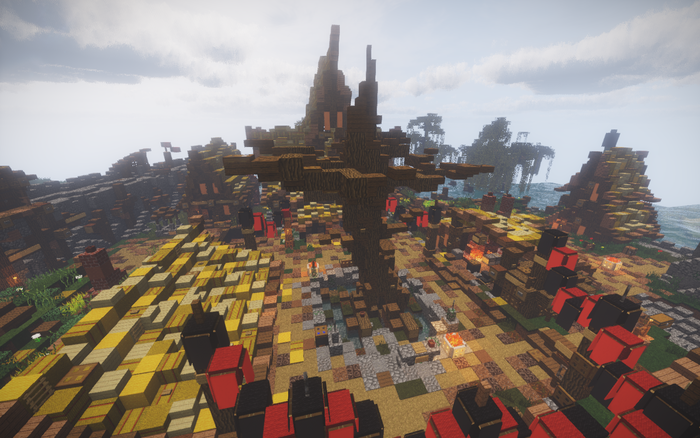 Nordengrad was a former capital of the Earldom of Nordengrad, replacing its previous capital of Ruriksgrad which was sacked and lost during the Atlas Coalition War. It was constructed in 1675 on the order of Thoromir Ruric. The city was the main settlement of the Earldom and primarily inhabited by humans, though some other races were known to have settled there, most prominently Elves.

Nordengrad was founded by Thoromir II. Thoromir felt as it was time for the Norlandic folk to finally re-establish itself back into the world of power, realizing that the surviving Norlanders would not be enough to support a Kingdom, he instead established an Earldom with the goal of regrowing the Norlandic culture and promoting the once widespread religion of the All-Father. Nordengrad flourished for years under the reign of Thoromir, until his unfortunate demise in a duel against Kenswey Fiscere, Nordengrad was in tumoral for many months until a new Earl was elected that being Jovik I Rorik, who reigned for merely a few years, until abdicating the throne to Torsten Rosik, stating that he was to old to partake in the stress of being the Earl. Before Torstens coronation as Earl, he quickly enstated the first ever Rosik guard force called the Rosikian Guard, having quickly elected a marshal and ultimately reformed the entirety of the Nordengradic military.

Marriage of Thoromir and Valencia

With the death of Thoromir I Ruric, the entire Earldom of Nordengrad held a moot to decide who of which was to serve as the new Earl. The Chieftans voted in favor of Jorvik Rorik, the son of Javier Ruric, placing him as the new earl of Nordengrad.

The Coronation was held on the 13th of The Grand Harvest, 1689. Where all the folk residing within the Earldoms region, came together in the Red Faith temple to celebrate in the coronation of the new Earl of Nordengrad.

Only after a few months of being named Earl, Torsten saw it fit to reclaim the title King of Norland, and bestow it upon himself, this an insult to the Empire, and a seemingly act of rebellion, caused the Imperial arms to rise, to retake Nordengrad and bestow someone more loyal to the Empire. This would be the beginning of the Third Atlas Coalition War, starting the war would be the Siege of Nordengrad, being mostly seen as a victory of either side, until an unknown man single handedly made a pathway for the Imperial troops on the walls of the Krag, resulting in a Imperial victory. Having Torsten I lost the battle, resulting in his capital being taken. Aurelius I, bestowed the title of countess upon Valencia Mournstone, once wife to Thoromir II.

Taking up a small ploy of land, Nordengrad sat to the Northern coast of the Cloud Temple. The Southern side of the town was bordered by a large swamp, and in the center of the town lay the Ashwood Tree. To the South of the tree sat the Ruric Hall.

The Ruric hall was located to the Southern Side of the town, landing almost directly in the middle of the city. This was where the members of the Ruric family lived, as well as where court and other matters requiring the earl's attention were held.

The Town square was the very center of Nordengrad, in which lay the famous Ashtree. Branching out from this were large amounts of housing for the people of Norland to reside.

The Earldom was governed by the Earl as well as the Ashen Council. In its later years, it consisted of four members. The Steward was entrusted with finding housing for newcomers, the Chancellor was in charge of all diplomatic affairs when the Earl was unavailable, the Commander was in charge of the Rosikan Guard, the eventual military order that guarded Nordengrad and lastly the High Priest was the head of the Red Faith.

The Earldom was guarded by a military order named the Rosikan Guard which was introduced under the reign of Torsten Rosik. The Rosikan Guard was charged with the defense of Nordengrad as well as the protection of the smallfolk and Royal family.

Members of the Rosikan Guard received free housing as well as free arms. A Rosikan Guard footman commonly wore chain, as there wasn't money nor supplies to acquire actual uniforms. Officers could be recognized easily by their uniforms which were different in color to indicate their rank.

The majority of Norlanders adhered to the religion of the Red Faith and the teachings that Allfatherism entails.