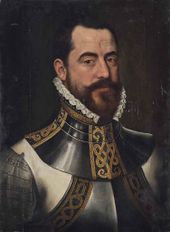 Markus Brawm-Lothston (3rd of the Grand Harvest, 1568 – 17th of The Grand Harvest, 1604), commonly referred to as Ser Markus the Loyal, was a Hansetian knight of the notable gentry Brawm family, serving all three kings of the Kingdom of Hanseti-Ruska till his death in 1604. When his family rose in revolt in the early 1590s, Markus chose to remain in the service of King Marius.

In reward for his service, he was granted his own arms and standards, and the heredity privilege of said arms. Himself and his descendants took the name Lothston.

Markus died in 1604 following the retreat from the disastrous Siege of Vasiland.

Markus was married to Natalie Kallstad to which he had 4 children.