From Lord of the Craft
(Redirected from Joseph Staunton)
Jump to: navigation, search

King Joseph Alexander Staunton (3rd of the Sun's Smile, 1594) was the eldest son of Tobias Staunton and Lisette de Aryn and was the third and final King of Courland, as well as the seventh Staunton Duke of Courland. Ascending the throne at the age of just fourteen, the young monarch was charged with maintaining the vast amount of territory conquered by his late father. Joseph maintained his Kingdom’s position as the most influential in Axios, however a covert unification of all human nations besides his, as the Holy Orenian Empire under Emperor John V, ultimately lead to his downfall as he was overthrown by his son, Prince Henry Richard Staunton, who stole his throne and illegally dissolved the Kingdom of Courland in the Isles of Axios, creating the Principality of Evreux.

Joseph Alexander was the firstborn son of Tobias Staunton and Lisette de Aryn, born in the newly-built Palace of Curonburg located in the center of Asul. Joseph was tutored primarily by clergymen of the Church of the ‘True Faith’, including Bishop Nikolas of Pontain, and his mother, leading to a zealous lifestyle as he grew older. He often partook in hunts with his father and other young nobles, including Dionysius de Savin, achieving his fame for his skilled riding.

Joseph was met with initially a turbulent situation at best. His father had inspired his people and was dearly loved by them, and Joseph had mostly been secluded in court during his upbringing. As a result of his father’s conquests, the Kingdom become severely overextended, with many petty lords in the territories of Tahn working to harm the Kingdom internally. The Kingdom of Courland was by far the largest nation in Axios and Joseph wished to maintain his father’s role as a mediator between nations. He held summits between the Kingdom of Urguan and the Kingdom of Norland during their hostilities and held a summit of all nations against the undead threat in the Kingdom of the Westerlands. His policy, politically, was one of status-quo where he promised support to weaker nations in case of foreign and potential imperial expansion. 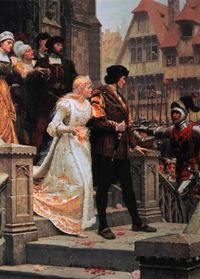 A year into his reign, Joseph was engaged to the Princess Royal of the Kingdom of Lotharingia, Marie Therese d'Amaury. The marriage was a more political one rather than a love-interest. Joseph wished to maintain the Kingdom of Lotharingia’s relevancy in human politics as the kingdom had recently delved into a succession crisis with many different claimants to the throne raising their banners in rebellion. Their marriage did indeed protect the Kingdom from possible foreign incursions and served to re-stabilized the turbulent region. Joseph’s marriage was controversial amongst the Courlandic nobles, as many cited Marie’s past Cannonist religion as an insult to the kingdom. Though Marie had renounced her old faith and managed to provide Joseph with an heir, Prince Henry Richard, after the birth of Charlotte Fransesca a year previous, the betrayal of her brother, King Hugues d’Amaury during the Greyspine Crisis brought undesired unrest amongst the nobility. However, Joseph remained loyal to his wife who bore him another two children, Prince Alexander Louis and Princess Alexandra Theresa, dismissing many prominent nobles from court who showed distaste for Marie.

The Greyspine Crisis was a controversial event that occurred throughout 1611-12, involving a dispute between the Count Ruthern and the Grand Duke Franz Josef Kovachev. The Count of Ruthern had invaded and annexed the County of Istria, a County which was a de jure part of the Grand Duchy of Akovia. The Ruthern bannermen had also killed the Count of Istria, and disposed of his body in the nearby woods before claiming their actions were in accordance of their orders supposedly given by King Joseph. This was indeed a lie, and Joseph released “A Royal Response to the ‘Act of Annexation, 1611’ “ which demanded a withdrawal of Ruthern bannermen from the Grand Duchy and a small demand in payment as reparations for the damages caused to Franz Josef’s lands. As the Grand Duke rallied his banners and began preparations for a siege Joseph called on the two Crown vassals to the city of Aleksandria where he attempted to find a solution to the crisis. The young Ruthern count, only of eight years of age, attended court with a large entourage of bannermen and his uncle. Joseph had both parties explain their view and decided to continue with the demands listed on the “Royal Response to the ‘Act of Annexation, 1611’”. The Ruthern count, advised by his uncle, refused to accept the demands, citing that they were not willing to cede money to the Grand Duke due to bad relations between the two parties. Joseph, wishing to maintain his legitimacy and wishing not to displease a major vassal in the already rebellious region of Hanseti-Ruska called for his men to apprehend the disloyal nobles. However the Ruthern bannermen, as commanded by the Count’s uncle, defended him from apprehension and as a result, fighting began to break out in the Royal Palace of Curonburg. An open melee broke out as a result, with loyal nobles and guardsmen soon overwhelming the relatively small Ruthern force, however, a stray bolt had impaled the young Ruthern count, resulting in his demise shortly after the brawl. 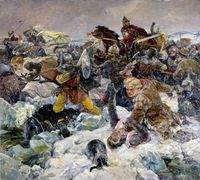 The Second Battle of the Rothswood, 1612

Due to the obvious ill-intent of the House of Ruthern to the interests of the Crown and their display of disloyalty, Joseph had a large host assembled and transported to the Tahn from where they would engage the Ruthern army in the Grand Duchy of Akovia. Joseph also called on his brother-in-law, the King of Lotharingia for his support in the war, citing their marriage alliance as just reasoning. The King of Lotharingia, Hugues d’Amaury did indeed send his army northward however in a complete disregard of honour and a show of the utmost betrayal, he had his army reinforce the Ruthern defenders. Joseph however continued preparations as his army still out-numbered the defenders two to one and began an incursion into Ruthern territory. The Second Battle of the Rothswood, fought between the armies of Courland and the combined armies of Ruthern, Horde of Dunamis, Lotharingia, Haensetic Refugees, and Knights of the Black was a complete and utter disaster for King Joseph. Caught surprised, he and his generals expected their armies to remain in the defences of the Metterden fortress, however they were forced into an unfavourable battle where roughly a quarter of the Courlandic army was slaughtered as the other three quarters remained in a defensive position. The loss, attributed to the surprising attack and the resulting lack of planning and communication lead to Joseph moving his armies to their fortresses north of the battlefield. Though a disaster for the Courlanders, the Ruthern army suffered light casualties as they then began to make demands. As a result the war became a stalemate, with minor skirmishes on the border continuing for months after with no side able to pursue the war to any sort of conclusion. The rebels were de-facto victors in the war, as the remained in control of their Seat of Metterden, and hostilities between the two parties began to diminish. The war would not officially end until a year later, with the signing of the ‘The Great Reconciliation Act, 1612’.

The Return of the Kingdom of Hanseti-Ruska

Through his father’s conquests, Joseph had inherited not only the Kingdom of Courland, but also the Kingdom of Hanseti-Ruska. He, and many others at court, believed that the continued rivalry between the House of Staunton and Barbanov was futile for both parties, with both losing vast swaths of territory at the other’s hand both in the Riga War and the Great Northern War. Joseph began to host talks with the second born son of King Marius Barbanov, Stephen Barbanov as he wished for a reconciliation between the two Houses and a possible return of territory. Through continued negotiation, Joseph offered Stephen the return of the Kingdom of Hanseti-Ruska, both title and land. In return, Stephen would offer Joseph suitable compensation as such to finance Courlandic expansion on Asul. The two Kingdoms also entered a defensive pact and Joseph’s sister, the Princess-Royal Elizabeth Maria was married to King Stephen shortly after. This was seen as a great success of Joseph’s, as he had through this document ended the Ruthern war from a year previous and made reconciliation between the Great Houses of Staunton and Barbanov.

Through shrewd diplomacy and a decline in Courlandic power after the disastrous Second Battle of the Rothswood, John Frederick, the firstborn of the deposed Emperor Philip Frederick, had managed to convince all independent human states to swear allegiance under him as he reformed the Holy Orenian Empire. Joseph’s primary ally, The Grand Kingdom of Urguan, had seen a state of severe decline in recent years and were not interested in a large scale war.