Joseph Clement de Sarkozy (Raevir: Iosif Filippovich Sarkozic, Illatian: Guiseppe Clemente de Sarkozy, Flexio: Josephus Clemente de Sarkozy) was the son and heir to Lady Helena Eleanor de Sarkozy, his stepfather was Demetriano Valentino d'Montelliano y Delatour and there was never spoken of him during his lifetime. He became a squire to Emperor Philip III at the age of twelve after the Aster Revolution, and later in his life Joseph oathed himself into the Imperial State Army to fight against the Tripartite Coalition. Joseph was otherwise known as Joseph Clement Sarkozy-Pompourelia. At his death, he was was known as "Venerable Joseph Sarkozic" otherwise in High-Imperial as "Venerable Josephus Clemente Sarkoz", known by the people of the Holy Orenian Empire as "The Sword of Oren"

Joseph Clement de Sarkozy was raised by his single-mother Helena Eleanor de Sarkozy and partially by his step-father Philip Hughes de Rosius. He was named after Joseph II, though having the same green eyes as his great-grandfather Franz Nikolai de Sarkozy and not quite having much relation to the Emperor-emeritus. Joseph had twelve siblings and each had their own passion. The House of Sarkozic does have a history of having many kinsman and so Joseph made the steps to strengthen family bonds with the Imperial Household. At age seven, he met Emperor Philip II, the second cousin to his grandfather Sir Tobias Henry de Sarkozy. Joseph his intention was to make as many friends as possible for he knew that his House was closely watched upon during the rule of Philip II, at least; so he describes within his diary. Joseph continued to spend time with his many siblings and cousins across the realm, and so his mother made Joseph Clement de Sarkozy the heir to the House of Sarkozic. He met his relative Philip III for the first time within the Principality of Savoy, a few months before his distant cousin took the throne of the Empire. Joseph Clement reunited with the other side of Sarkozic for the mother of the Emperor was one of his house; and so he grew close to the Emperor and sees him as his kinsman.

Joseph his later life was an interesting one; He fought in many battles, proved himself before the Emperor to become a Knight, and had the courage to ask the Emperor for the hand of his daughter, the Princess-Imperial; a long time friend of Joseph. Joseph was involved in many battles against the tripartite coalition in his later life for he became an utter patriot to the cause of a united humanity. His dedication to the Empire had never faltered and so he kept doing what he does best in service of it even when that had put his own life at risk. Joseph became close friends with the Princess-Imperial and thereafter the Emperor granted Joseph permission to take her hand in marriage as to continue his life as future Baron and to create the next line for the House of Sarkozic. From there on, Joseph Clement de Sarkozy was formally betrothed to the Princess-Imperial and so he patiently waited for the Urguani-Orenian conflict to pass; so they may live a happy life together. 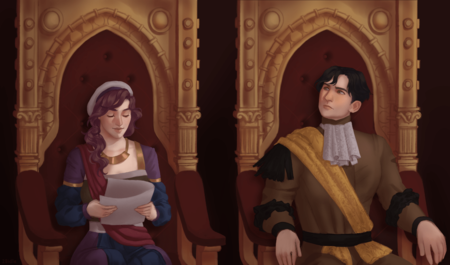 "A Family Dinner" (Circa 1857). The portrait depicts Lord Joseph Clement de Sarkozy and Princess-Imperial Catherine seated in at a family dinner in presence of the mainline Imperial family.

The Imperial Wedding of 1861

The Imperial Wedding of 1861 was a most grand occasion in the lives of Joseph and Princess Imperial Catherine. The two having been life-long friends and thus with the blessing of Emperor Philip III, Joseph was allowed to take the hand of Catherine in marriage. This moment was rather historical for Joseph Clement himself was of low stature and thus he never imagined that he was able to marry the Princess Imperial of the Imperial Household. Though, Joseph was aware that this brought a huge change in his life in regards to being married to someone of such stature and the etiquette that came with it.

This wedding was considered to be quite the boon for the House of Sarkozic but the only difference between the many weddings in the Orenian society was that this wedding was not for a political alliance or for any other ambitious reason. This marriage was done out of the love that Joseph held for Catherine for the entirety of their lives and to go into a bright future together.

Joseph wore the a pure white attire with golden accessoires, together with a cape that symbolized the eagle of Sarkozic through dark bordeaux red lines. As for Catherine, she had a white dress, a purple mantle and a golden tiara. The union between the Sarkozic and the Novellen was quite the historical event for the last time that one of House Sarkozic managed to marry into the Imperial Household was the grandmother of Catherine, Amadea Ulyssa de Sarkozy.

At the age of 13, Joseph began to approach officers of the Imperial State Army to become recruit for the war that was about to make its way to the Imperial borders. Upon his training, he has defeated four of his fellow recruit and a sergeant at the age of 14. Joseph had his first battle at 15 years old, he fought in the Battle of Cape Whitcombe; a naval battle that was fought during the period of the Urguani-Orenian War. Alongside his 76 year old grandfather, the two Sarkozics charged into battle to fight for the Empire and to kill until there was not a soul to hear of the tripartite coalition. And so when the battle had ended and the enemy had fled, the battle was won by the Holy Orenian Empire. Joseph fought in the many battles that were apart of this conflict.

The Siege of Southbridge was a devastating loss for the Empire - Joseph himself was apart of the defending force who shot with crossbows to those who tried to occupy the fort. Alas, the trebuchets of the Tripartite Coalition managed to wreck the entirety of South Bridge and with that happening only 500 of the 8,600 managed to survive this battle. As Joseph and his fellow soldiers left the battlefield, South Bridge was besieged until nothing was left. The following day, Urguanite and Haenseni flags waved over the fields of Lower Petra. The Tripartite Coalition was victorious and conquered land of the Holy Orenian Empire.

As the Imperial State Army and their allies began to rally, Joseph joined them as they marched for the North. The Imperial State Army and their alliances thus marched, through the snowed mountains alongside the border between the Kingdom of Norland and the Dual-Kingdom of Hanseti-Ruska. As they arrived at the gates of Karosgrad, they moved up to higher ground to take a good position and to loose arrows at them. It worked for some time until the rally of Haenseni and dwarves arrived at the hills, causing an enormous slaughter and both parties to retreat and to recover.

Joseph remained a faithful man through out the entirety of his life; himself being utterly dedicated to his distant kin, Tylos II. Joseph who was twenty at the time; offered himself to a task as the Monsignor of Providentia; a representative of the Church within the Holy Orenian Empire. During the era of the anathema, Joseph was responsible for the direct correspondence between the Church and the Holy Orenian Empire for terms to get the anathema lifted from Philip III and Anastasia I. Even despite the punishment that was placed upon his father and mother in-law; he remained as faithful as he was before and made every endeavor to bring the Holy Orenian Empire back to the Church; whatsoever the cost of it would be.

"Me shall not try and achieve the most holy deeds Exalteth Godfrey had done; but an me, have to dost such to breth the faithful back; so be it." - Joseph Sarkozic

Joseph Dimitrovich Sarkozic, passed away on the 2nd of Sun's Smile, 1867 due to an extreme amount of bloodloss at the age of thirty. It is said that he hid his fatal injuries that he got during the Battle of Arichsdorf; The medics who tended to his wounds told everyone around him that he was going to make it. Unfortunately, he did not. He passed away whilst he choked upon his own blood within the Barony of Pompourelia. His last words were:

"May they find their way to GOD again, for that is what we, Orenians stand for. A Holy Empire, with thousands of years of history and prosperous reigns." Venerable Joseph Sarkozic, Baron of Pompourelia

After his death, his family mourned his loss and thus his title was passed onto his eldest son; Franz Arthur Sarkozic. He trusted in his son, for he named him after his own great-grandfather Franz Nikolai de Sarkozy and so he believed that he would have the same wisdom as his predecessors. Yet, it was always known to Joseph that his death would come at an early age; he who was named after Joseph II and Joseph 'The Red' Sarkozic, the same man who slaughtered his own folk. Joseph himself, always said that his name carried a curse; in which case, it was all the conflict he had to go through in the Urguani-Orenian Conflict.

Three months after his death, the Church of the Canon had decided to venerate him for the deeds that he had done in his position as the Monsignor of Providentia and for him trying to reunite the Holy Orenian Empire with the Church oncemore. After the Nonus Aurea Bulla Jorenus; Joseph was henceforth known as "Venerable Joseph Clement de Sarkozy".

This Coat of Arms contains everything of his ancestry through his father and mother - Each quarter having the symbol of his ancestry which includes the following Houses of: Sarkozic, Varoche and Montelliano y Delatour. This Coat of Arms has been made to resemble each and next generation of House Sarkozy through Joseph Clement and thus it shall continue to be passed on through the descendants of his heir and the heir who follows after him. And so it continued.