John Sigismund, also known as John II (High Imperial: Johannes Sigimundus; Savoyard: Johann Sigismundo) (1st of Malin's Welcome, 1521 – 25th of Malin's Welcome, 1595) called the Quarreler, of the House of Horen, was the second Holy Orenian Emperor of the restored Fifth Empire from the death of his father, John I, in 1547, until his own abdication in 1568. He was his father's first son by his much maligned empress-consort, Adelheid of Istria. He was succeeded upon his declaration of abdication by his own firstborn son, the then Prince of Alstion, John III.

The entirety of John Sigismund's reign was marked by his unstable mental state and the rumbling chaos which the Eighteen Years' War had created. His period of rule is mostly known by historians as the Anarchy- nearly two decades of inner-vassal conflict and rebellions against the Imperial State. John Sigismund failed in multiple regards to unite the Empire as his father had done years before, his meek and overall obscene nature leaving bitter tastes in his vassals' minds.

Upon his abdication, John Sigismund retired to an estate in the countryside around Johannesburg with a few close friends, free to practice his eccentricities unburdened by the governance of the realm. He is believed to have died following the destruction of Johannesburg.

John Sigismund was born to the cold marriage of Emperor John and his wife Adelheid of Istria as their firstborn son. When his father took the throne in 1526, the young John Sigismund was uplifted as the Prince of Alstion and educated accordingly to princely tradition, in order for one day he himself will rule. His father had purchased countless tutors and educators for his son, while keeping him strictly away from his mother to much of her protesting. Despite numerous attempts in seeing her son, John Sigismund was effectively barred for ever seeing his mother and eventually grew the same cold hatred for her as his father had. When John Sigismund was seven years old, he contracted a deathly flu which was designated as fatal. The doctor at the time used ingested quicksilver to cure the boy, however caused serious mental damage would later impact his reign and personality. From then on, John Sigismund was remarked as first merely eccentric, however throughout his life his mental capacity would shrink and devolve through the years.

John Sigismund served as a squire to the father and served in the reserves during the Battle of Marnadal in the closing years of the Eighteen Years' War, but was sent back to Luciensport on request of his father before the Siege of Dunland. When his own father perished at the fight which he was spared from, John Sigismund succeeded as Emperor John II and was crowned within Luciensport. 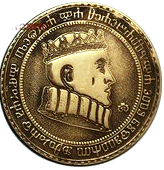 An Imperial minas during the reign of John II

John's first act as emperor was his meeting and deliberation with the dwarven emissary and general Azghal Doomforged, upon the island of Avar. Shortly before, the Imperial general Count Rothesay successfully defeated the Second Rurikid Uprising at the Battle of Seahelm, firmly defending the newly-acquired island from further incursion. John and Lord Doomforged met in the port of Seahelm, where they both signed the Treaty of West Avar, ending the war in favor of the Empire. 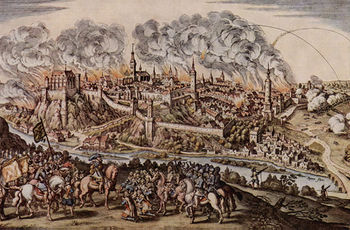 The Felsen Coup, which disenfranchised city watchmen attempted to take ahold of the city and palace, leading to the death of numerous officials and the installment of John II's son as Prince-Regent.

John Sigismund's decreasing mental facilities led to further outcry by the nobility, especially after the poor handling of the Riga War by the Emperor himself.

In many ways, John II was regarded as the polar opposite of his imperious father. While John Frederick was strict, serious, austere, assertive and calculating, John Sigismund was carefree, eccentric, worrisome and prone to blunders and misjudgment. Many had high hopes for the young emperor upon his accession to the throne - his father had grown particularly unpopular during the last three years of his reign, his stern and unbending demeanor becoming regarded as tyrannical and his enthusiasm to continue the Eighteen Years' War not shared at all by the populace. John Sigismund's eccentricities were perceived as harmless, and it was believed that a more affable, peace-loving and less severe monarch would do much to reaffirm the realm's stability after the war. Immediately upon his succession, he managed to end both the war and the Taxman's Conspiracy. Despite this, John II's reign would become one of the most violent and tumultuous in the history of the Holy Orenian Empire, to the extent where he would inevitably become known as 'the Quarreler'. To what extent the emperor was personally responsible for this is a topic debated by historians even today, however it was known that though he was educated, intelligent and personally likable, he was unable to command either great respect or great fear.

John Sigismund's eccentricities (A mortal fear of many types of fruit, including pineapples, to name one such idiosyncrasy) resulted in him becoming a caricature of ridicule in his people's eyes. They only became worse as his reign progressed. His poor judgement in dealing with matters both domestic and foreign were also notable - he misplaced his trust in several treacherous polities, eventually resulting in a number of violent insurrections and revolts that threatened to see the end of the Horen dynasty in the period known as the Anarchy. Though when he came to the throne he had been an energetic ruler, towards the end of his reign, he began to show a lack of concern for affairs of state, delegating them to his chief ministers and his son John III as Prince Regent. John II's intentions were usually pure and for the benefit of the Empire and its people, however his blunders typically made them impossible to be realized.

Physically, he looked much alike to his father John I, with the same brown hair and grey eyes. Also like his predecessor, his hair began to lighten and recede at a relatively early age, for which he was sometimes known as 'the Bald'. John was naturally loving of peace and quiet and unsuited to the realm of war and politics, and so after his abdication he retired to a humble estate on the outskirts of the capital with a few trusted companions. He is thought to have died in the Thanhium explosion of Johannesburg.