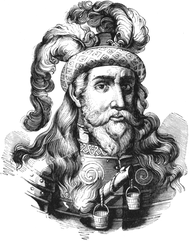 Jacque Staunton (11th of Malin's Welcome, 1576 - c.1694), known most commonly as Jacque de Felsen, was a Heartlander mercenary commander, general, and noble in the service to the Kingdom of Courland. Founder of the mercenary company the Felsen Watch, Jacque performed and commanded numerous successful battles in the service to his cousin Tobias I of Courland, namely in the Coalition War and the Great Northern War.

Originally Jacque of Staunton, the young bastard boy was born to the noble George Staunton and a young peasant woman precisely twelve years after the horrific events known as the Riga War. Tossed aside and discarded by his father, Jacque alongside his single-mother spent most his early years in travel from place to place plagued with constant hunger and the daily reminder of his father’s name, a name that if anyone had found out could lead to a deadly end for the young Jacque of Staunton. Things continued like this until Jacque’s early adolescence, in which Jacque’s mother had found love and married with an older grizzled mercenary. The small family had then settled within the cut-throat lands then known as the Dreadlands, where Jacque’s new step father begun training him in both swordsmanship as well archery for two years, before Jacque himself decided to venture out and journey towards the one place in which his life would be most at danger, the Holy Orenian Empire.

When Jacque had first arrived within the borders of the Holy Orenian Empire, he was hired as a sellsword to help guard the at-the-time poorly garrisoned city of Aldersport, within the grand duchy of Savoy. Here, Jacque began forming friendships and bonds with the Savoyard soldiers, mercenaries, and nobles who grew fond of Jacque due to his light-hearted ways as well charismatic personality. Things like this continued for Jacque for a single year before the sudden fall of the Grand Duchy of Savoy at the Holy Orenian Empire’s hands. Jacque, though his time was short-lived with the Savoyards, was devastated by the shocking turn of events, and due to this gathered whatever support he could from the remaining men and formed a small mercenary band of skilled Orenian outcasts with the single goal of terrorizing the Empire, infamously known today as ‘the Felsen Watch,’ a name given in spite of the Empire’s most successful capital city in the past.

Jacque, after his first few successful raids against the Empire’s capital of Johannesburg, openly declared his origin as a bastard of House Staunton. This seemingly enraged the nobles of Oren as Jacque had intended, though also unexpectedly caught the attention of the few remaining Stauntons taking refuge in the dwarven Grand Kingdom of Urguan, a kingdom fighting a brutal war against the Holy Orenian Empire at the time. After a fruitful secret meeting between Jacque and Aleksander Staunton, an agreement was made to officially oppose the Empire under a single banner, the green banners of House Staunton. With an official declaration of war, Aleksander Staunton’s forces had merged with Jacque’s Felsen Watch mercenaries, garrisoning and fortifying Jacque’s own keep at the time, the fortress of Ostwick, at the outskirts of the Archduchy of Lorraine.

With things taking a very serious turn, Jacque’s military career on the grander scale of things had officially just begun. Named the Marshal of the surprisingly numerically vast and well-armed thanks to a single Savoyard smith Courlandic forces, Jacque had helped lead numerous successful skirmishes against the Empire’s ‘great’ Imperial legions before under command of Aleksander moving his army to join forces with the dwarven legions of Urguan, the levy of House Brawm, the mercenary forces of Noxus as well the dominant snow elven warriors of the Ivae’Fenn taking a stand against the Empire at the battle of the Gorge. There, a dramatic battle was fought where victory had come down to a mere few dozen dwarven, Fenn, Noxus and courlandic soldiers standing. This unexpected victory had shocked the Empire as the concept of losing was foreign to the Holy Orenian Empire. As the months passed, more and more Coaliton ( The name for the Anti-Empire Forces ) victories began to appear all around against the Empire, most under the military leadership of the now famous Jacque of Staunton. The most infamous of the smaller engages between the Coaliton and Empire forces was that of the John D’Amaury rescue, in which the Duke of Lorraine was captured by large Orenian force for rumors of rebellion only to be saved by a handful of greatly outnumbered Fenn and Courlandic cavalry personally accompanied by Jacque, quickly dispatched from Jacque’s personal keep of Ostwick.

A year had now passed since the battle of the Gorge, and another more decisive battle had finally taken place, the battle of Metz. Here, the Coalition forces joined by the ‘holy’ army of the duchy of Lorraine had without mercy crushed the Orenian armies permanently crippling them for the rest of the short-lived war. At this point, rumors had spread around mainly Courlandic forces that their Marshal, Jacque, was incapable of losing due to some sort of divine power. This theory was supposedly ended when Jacque was reported killed after the Thanhium blast in Johannesburg that destroyed the Empire and ended the war. Painted not by the nobles, but by the soldiers a hero, Jacque was given the notorious title of Jacque de Felsen, the man of the Rising Sun, specifically given by his closest friend, a strange white-haired elf simply known as the time as the Felsenic Watchman.

Five years had passed since the fall of Orenian Empire and multiple smaller kingdoms had risen throughout the Empire’s once vast lands. One of the more predominant Kingdoms, the Kingdom of Courland led by Aleksander’s successor, Tobias Staunton had found itself in a terrifying situation. The rumored to be strongest Kingdom, the Kingdom of Haense had declared war on the Kingdom of Courland, and almost all of Courland’s allies except the few mali’fenn as well a handful of dwarven mercenaries simply turned the other cheek at Courland’s call for aid, a time in when Courland was in its most desperate need. During these dark times, Jacque had mysteriously returned from the ‘dead’ to offer his aid to the Kingdom of Courland. This shocked not only Courland, but those far and throughout as Jacque was at the time thought to have been dead.

Though Jacque was named Marshal by King Tobias Staunton, the now prime man decided to take a more passive role in the Haense-Courland war. Jacque simply stood as a figure of inspiration to the Courlandic forces, as others including the duke of the Duchy of Savinia, Abdes de Savin as well Sven Staunton took more active roles in leading the Courland armies throughout the duration of the war. Jacque still used his influence to inspire the men and his strategical ‘genius’ to help Courland whenever he deemed necessary or fit.

Near the end of the Courland-Haense war in which Courland was assured victory, Jacque spent the rest of his life trying to save as many Haense people as he could. One letter, sent to him right after the succesful Courlandic siege of the Vanir fort, had emotionally touched Jacque in ways that nothing else could. Jacque now inspired to save as many lives as he could, set out to the Hansetian capital of Karlsburg only to be caught off guard in a blizzard and never to be seen from again. He was officially reported dead by the Courlandic military a month after. This brought heartache to the hearts of many as people from all over mourned the loss of Jacque. Some of the soldiers painted him as a war hero, which in turn brought jealousy towards the hearts of some of the Courlandic nobles. Rumors were spread of Jacque’s soulless, savage nature and a man who was once praised as a savior now began to be painted a demon.