Isabel Franziska Petrovna Baruch (Common: Isabella Francesca Baruch, Flexio: Elisbela Francesca Barucid) was the fourteenth Queen consort of Hanseti-Ruska as per her marriage to Josef I, King of Hanseti-Ruska on the 18th of the First Seed, 1786. She was a Haeseni noblewoman as the daughter of Peter I, Duke of Valwyck, and his consort, the Duchess-consort Sofiya of Vasiland. Her lively nature at courtly parties, she would be dubbed the Dancing Queen.

Born in the year 1770, Isabel of Valwyck was raised as daughter to Duke Petyr Baruch as the youngest of five siblings. She matured early into her youth as a onlooker to the brutish familial ongoings resulted from her father, who has been oft monikered by historians as Petyr the Beater. When such events did not occur within her household and her father was away as the Lord Palatine to King Sigismund II, she was raised by her mother in courtly manners and received a proper education befitting to a noblewoman of her status as the daughter of a duke.

She bore witness to the abuse of her mother and four eldest siblings but was one of the few in the family to have been safe from her father's cruel physical punishments. However, frequently was the Baruch youth reminded by her father that her mother held no love for her and instead despised the girl. The abuse was said to have allegedly gone as far as her mother being beaten whilst pregnant with a bottle, but - to the luck of young Isabel - she had never seen that act in particular as the youngest. Around six years of her life, Isabel found the mutilated body of her mother after she took her own life by jumping from a balcony in Valwyck. Her father accused Isabel of being the sole reason and fault of her mother's suicide, leading to a guilt that would consume a majority of her life thereafter- even into her adulthood. After the accusation, he was murdered at the hands of her brother Petyr (later disowned to be Petyr Wick), which occurred before her eyes.

Isabel spent little time in Valwyck and instead in the Ekaterinburg Palace with Viktoria of Metterden, Queen consort of Hanseti-Ruska, after she was orphaned and her family fell further into shambles. Her eldest brother was disowned and no longer considered the heir to Valwyck after the murder of his father. He was later adopted into House Wick, much to the dismay of those still remaining in the family. She was seen as the most suitable match for the future King of Haense, Prince Josef after having been around him throughout her youth and befriending him as a result of her father's prominent occupation in the palace.

From the view of the Haeseni courtiers and too the Queen-Mother, Prince Josef and Isabel held a close relationship with one another after her accumulated recent time spent in the palace thereafter her parent's tragic deaths. The House of Baruch had been of most prominence amongst the Haeseni houses at the time, serving in the peerage as dukes, and the late Duke of Valwyck's position as Lord Palatine led to the suggestion of Isabel to be the successor to Viktoria of Metterden. At nine, Isabel was betrothed to the crown prince and taken as a ward under Queen Viktoria. She took particular interest in the Queen's Council and any other vassal meetings the queen attended to. Whenever called for, Isabel flanked the side of the queen with utter attentiveness. The guilt of her mother's death still weighed heavily upon her and often was said to have brought nightmares to her, according to servants of the Ekaterinburg whilst she was resident there.

Under her wardship to Viktoria, her confidence increased immensely and she learned how to present herself before a crowd. Seeing as the Queen was not one for courteous or palatial matters, Isabel instead was taught to bow to no one - allegedly, not even to the empress whilst the Haeseni were under the Holy Orenian Empire as vassals - and garnered a strong respect for the military. With two of Isabel's sisters in the military, she was able to have spars with them and learned basic swordsmanship from Queen Viktoria as well. Courtly matters she learned on her own time, and with her governess Adelaide Myrrh. She managed most of the servantry, as she maintained a strong relationship with the head of servantry, Ser Rubern Vasili (considering him to be . Hunts were frequented by the Queen-to-be whenever often she could. Her intensive studies under the Queen began to falter after Queen Viktoria was seen less and less about the palace, after the disturbances in her family- including the suicide of her husband, Sigismund II. With her governess as her primary mentor thereafter, she focused on her private lessons of dancing, piano, and music theory from Lady Adelaide.

Isabel married the King of Hanseti-Ruska, Josef I on the 18th of the First Seed, 1786, in the Basilica of the Fifty Virgins. She was commended to be "[...] magnificent yet brazen, if not a symbol of the Lady Haense herself" in her silk and satin dress of creme and gold color. The dress trailed behind her with a red train laced with true gold, and as she entered the cathedral she was brought down the aisle by her brother, Duke Matyas Baruch. A refined red ruby, said to have been the necklace of Reza of Turov dangled most prominently from her necklace and, upon her finely fixed coiffure was the traditional regalia amidst the Haeseni Queen's weddings and coronations, the diadem of Valera of Adria. Her marriage ascended her to the position of Queen consort of Hanseti-Ruska and thus sent her forth into leading the royal courts with her own jurisdiction.

Her reign as queen began with a court that had been empty for a great deal of time prior to her ascension. Her predecessor was absent from the court, and left Isabel without much of a court to build off of. Rather than base the beginning of her tenure in initiatives, Isabel filled courtly positions and expanded the Queen's Council with competent, eligible workers who would help her rebuild the quiet court life. When question was risen against her husband, she was seen –throughout her entire life– defending the king's name and honor, and remaining as one of the most loyal wives to a Haeseni king. 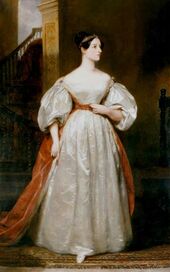 The first painting of Queen Isabel as consort to Josef I after their wedding, circa 1782.
She maintained a resolute demeanor, yet at first timid when correcting the rigid etiquette of the Haeseni courtiers who had lacked lessons in such and often overstepped boundaries when addressing the royal family.

As years would pass, Isabel gained a far more brazen attitude in addressing the wrongdoings of courtiers and blatantly calling out those who would attempt to address herself and her family with anything but respect. She went on to host so many balls, masquerades, and competitions for dance that she was often remarked as the Dancing Queen of Haense. She never followed in the warrior footsteps of her predecessor, yet still was seen alongside soldiers as a nurse and attending to the wounded when troubles were to arise– wearing an HRA uniform as the prior Queen Viktoria had done in different fashion.

The Queen's Council under Isabel remained relatively static throughout most of her reign as consort. She befriended Lady Rosalind Amador and Lady Charlotte Baruch, both who would accompany her in most outings and courtly matters. She listened to the occasional advice given to the Queen-Mother who made less and less appearances in public life, and never attended any events surrounding the court. Her husband had seen little of extravagant courtly life himself, and thus she relied on her own instincts for how to maintain a proper court. Towards the middle of her time as consort to Josef I, rumors speculated that Isabel had tendencies that lended towards her father, who was often remained as having bouts of insanity. The rumors were never officiated through private royal family documents, or any other sources yet to be revealed (if any, at all).

She became the primary source of knowledge for her children, and tutored them with only a few governesses and attendees to the three children she coddled; Princess Katerina, Prince Heinrik, and Prince Andrik. The children were remarked often as, "stubborn children who were unaware of the harsh realities of life beyond their comforting palace walls" as their mother shielded them from outside life and safeguarded them with the luxuries of royal life. By the time of her husband's death from a heart attack in 359 ES, the children were still young– causing her to further retreat to protecting her children from any harshness that she could keep them from.