The House of Horen-Marna also now known as the House of Marna is a cadet branch of the Johannian line descending from the imperial House of Horen. The house was created when John I created the Duchy of Marna - from which the house was named - for his second son Prince Alexander Louis. Alexander Louis had already been made Count of Westmark in 1539 and was granted further lands and privileges at the end of the Eighteen Years' War.

After years had passed since the family gave up their titles to Aurelius I, Emperor of Man in 1651. The family's whereabouts would be unknown though it was presumed they were hidden in Aeldin until the year of 1714, to which the family reappeared from the shadows plotting for their restoration along with pressing claim for the Holy Orenian Empire. The grandson of Frederick I of Marna, Joseph I, would be supported by many to which he'd then be crowned in Reza though would result in the War of Two Emperors.

Origin of the Dukes of Marna

Emperor John I granted to his second son Prince Alexander Louis Horen the titular title of the Duke of Marna at his birth in 1522. Later grants included the Count of Westmark in 1529 for the young Duke of Marna's seventh birthday and later that of Governor of the Province of Erochland, which Alexander held until his death in 1572 at the age of 50. Frederick I of Marna would later use his descent from Alexander to legitimise his claim as the rightful successor of the Holy Orenian Empire following the Coup of Adelburg by Canonius Horen-Pertinax. 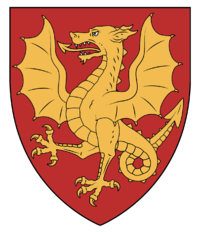 The early coat of arms for the House of Horen-Marna
Alexander's marriage to Aurelia de Bar, daughter of Denis de Bar, 2nd Count of Peremont and great niece of Guy I, King of Oren, placed him right at the centre of Orenian aristocracy. Alexander's sons, Leopold and Philip Horen-Marna, became the most powerful nobleman in the Holy Orenian Empire, the former becoming Archchancellor of Oren under John III, Holy Orenian Emperor and later King of the Westerlands, whilst the latter became the Duke of Mardon.

Reign of Frederick I

Joseph I and the fall of the House of Marna