The House of Baruch (Common: Baruch; High Imperial: Barucid) is the current ruling family of the Duchy of Valwyck and vassal of the Kingdom of Hanseti-Ruska. They are descended from St Otto of Vanderfell, placing them in alignment with many of the Highlander families and making it easy for them to create a home in Haense. However, the Baruchs and those who live in their lands are distinct from others who hail from Hanseti-Ruska; the family is known for their Ayrian culture in the vassal territory of which they adminster.

The house's founder, Marius Baruch, was a staunch supporter of House Horen, assisting in the assassination of Guy, King of Oren to allow for the Horen Restoration. With a Horen on the Imperial throne, Marius went to Luciensport to assist in its formation. After dedicating his life to creating and maintaining Luciensport, Marius died and left his two sons, Bernard Baruch and Joren Baruch, orphaned at a young age. The eldest of Marius' children, Bernard made the most of life in Luciensport; choosing to enter the clergy, he was a real servant of God and eventually succeeded to the Pontifical throne as Everard III. Not wanting the same life of his brother, Joren went to fight in the retinue of John of Carnatia. During his service in Lord John's service, he grew close to Adelajda Roswell, the daughter of Lord John's close friend Duke Arthur of Istria. Eventually marrying Adelajda, the pair continued the Baruch line. After Joren's knighthood following the Eighteen Years' War and with the birth of their three children, Eirik, Harold, and Isabel, the family settled in Ser Joren's knightly fief on the coast of Carnatia. With access to the coast, Ser Joren took up whale hunting and created the tradition of whale hunting within the Baruch family, as well as instilling a proud naval presence.

Upon the descendants moved to the Isles of Axios, Lord Eirik was granted the Barony of Voron under Haense. With the help of House Pasquier, Eiriks followers eventually grew in size exponentially. He hosted many events, such as whaling and hunting, which attracted the newly crowned king of Hanseti-Ruska, Andrew, to him; who became fond of the Baruch tradition and therefore granted him the County of Ayr, a title previously held by the Baruch's Rovin ancestors. The titles of House Pasquier were inherited by Lord Otto when the house died out shortly after the reformation of Haense. Count Aldrik rose to power in 1640, after the death of his father Otto via dementia.

Ser Aldrik led his followers aboard the Baruch fleet to the continent of Atlas, alongside the rest of the descendants. The Baruchs spent their first few years helping out around Markev, before Aldrik built Greyguard Hold north of the city, across the Czena. This new keep also served as the namesake for Baruch's new truce and alliance with House Ruthern after the signing of the Greyguard Pact. At this point, the Baruchs were notable for their adamant resistance to mandatory army service and the abolition of vassal levies, which they held anyways. After the reign of Otto III, Aldrik held Greyguard as an independent county briefly, before the ascension of Karl II. Eventually, Aldrik died of cancer, leading to the rise of his son, Petyr Baruch, who had been abroad for years. His failure to show up to the dais led to him being presumed dead, so instead, Aldrik's second-born, Eirik Otto Baruch took the mantle. Unfortunately, he was not too keen on ruling, and abdicated to his younger brother, Marius Karl Baruch. Marius inherited a broken and weak House, losing the land his Father settled years prior. The keep of Greyguard Hold was taken by Arberrang, who sought to wage war against Haense. Luckily, the forces of Haense defeated Arberrang and took back Greyguard Hold, granting it once more to Marius and his kin. He ruled in peace for the rest of Atlas before bringing his family to Arcas. 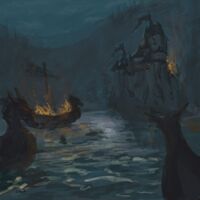 A few years before the realms of Atlas fled to Arcas, Marius had abdicated to his grandson, Jan. The new lord established the County of Ayr on Arcas and along with it the Baruch's family keep. But at the dawn of the War of Two Emperors, Count Jan betrayed Haense, siding with the Pertinax. Most of the collective family of Baruch, especially Marius Karl Baruch and Jan's son Sigmar Baruch, decided on disenfranchising, disinheriting and disowning Jan. So, Jan "the Black"'s titles then passed on to his eldest son, the young Sigmar, a Haeseni patriot who went on to execute his own mother for treason charges in the waning years of the War of Two Emperors. He spent much of his early reign attempting to overcome and repair his house's dirtied reputation, which for the most part worked - the Baruchs had once again become a respected house. Partially because of this and among other reasons, Sigmar was bestowed the Duchy of Valwyck from King Andrew IV. Sigmar also reestablished the House of Baruch-Gant as the Baruch's cadet branch.

Upon Sigmar's abdication in 1753, Peter I, Duke of Valwyck rose to power. His first order of business as Duke was to tear down his predecessor's castle and replace with Valstadt Castle, a keep which was much more ducal. Although considered by many to be mad in his later years, his reign was defined by two things. The first, the Valwyck Pact, an alliance between vassals that he led in an attempt to stop the perceived tyrannies of Otto Sigmar's regency for King Sigismund II. This put him at the center of Haeseni politics and later he became the Lord Palatine of Hanseti-Ruska and therefore head of the Aulic Council from 1764 to 1776. The second was the Scyfling threat to Valwyck during his reign. In 1768, Petyr, his family, and a small group of Haeseni successfully fended off Valstadt Castle from invading Scyfling barbarians. Though in 1772, the castle was ambushed and Petyr's son Matyas was captured. This was the straw that broke the camel's back for Petyr - he often had bouts of insanity after losing one of his sons. Petyr resigned in 1776 and was accidentally killed by his son and successor, Peter II, Duke of Valwyck, during one of his fits of madness.

Petyr II's reign, though, was short and mostly failed. Petyr I's son Matyas was freed from Scyfling internment soon after his father's death. Petyr II received mounting pressure from his family as each year passed, and in 1783 he eventually complied with his family's wishes and abdicated to his returned brother, Matthias, Duke of Valwyck. Notably, Matyas' sister Isabel of Valwyck married King Josef I during this time to become the first Baruch queen-consort of Hanseti-Ruska.

The House of Baruch was granted the County of Ayr upon Andrik II's ascension to the throne of Hanseti-Ruska.

King Andrik IV granted Count Sigmar the Duchy of Valwyck in 1748 for his outstanding work as a peer. While the County of Ayr remained in the house of Baruch's possession, 'Duke of Valwyck' became the family's primary title, which it currently uses.