Inheriting the crown of Norland via Kingsmoot after the abdication of his younger brother Sven, Hakon led his people in the wake of the destruction of Seahelm into the Principality of the Dreadlands. At this time, as the nation of Norland was nonexistent, Hakon instead was titled as 'King of Norlanders'. In his time as King, he led the Norlandic people in many raids upon the Orenian nation, eventually building The Bonefort in the Dreadlands entirely out of wealth plundered from the Empire. With the fall of the Dreadlands in 1571, and the death of Hakon in it's defence, the Norlandic people were once again scattered, until being reunited and reformed by Artyom Eiriksson Ruric.

Hakon Ruric also known as Hakon "The Shipwright" (1st of Malins Welcome, 1521 – 10th of the Snows Maiden, 1615) reigned as the Lord of the Bonefort from 1565 until the fall of the Dreadlands, throughout this time Hakon lead numerous raids on the Holy Orenian Empire coming out victorious in all his battles, for the wrong they did his family in the Third Rurikid Uprising, Hakon was also the first Lord Commander of the Infamous Ashguard. Hakon was the most strongest military commander the House of Ruric had. He was also father to Javier Ruric the Eigth King of Norland. Hakon was sadly unable to see his son reign having died in the year 1615

Hakon was born in the year 1521, to Eirik Ruric and Ylva Ruric, being the eldest of three sons. Hakon was quickly groomed for command, as he was to take up the mantle of leading House Ruric one day, he trained constantly and mastered the art of sword, axe, bow, and horseback, it was rumored that only the greatest warriors could defeat Hakon. Upon reaching the age of twenty Hakon looked over his men as they rallied in the square, he only saw a band of unorganized bandits, not believing that this army was fit for the Emperor he asked his father if he could form a military order, his father, Eirik of course saying yes, beliving in the same things as Hakon. Hakon quickly drew out plans for an order called the Ashguard, only the elite were to join whilst the others would ongo training to eventually become part of the guard. Hakon only took up a select few at the beginning and trained them for months upon months until he deemed fit that they were ready, he then took on another small group that was ongoing training for Hakon's training. After years of preperation he made the finest military order Norland had to date, having lead them on countless raids against the Grand Kingdom of Urguan, aswell as the Horde of Dunamis, coming out victorious in next to all of his fights. Hakon was a notable commander in the Battle of Hoar Hill commanding his Ashguard he managed to do a large amount of damage to the Dwarves, before being speared in the knee, forcing him to be carried off the battlefield. His wounds overtook him and he spent years in pain, many believed it was the end of Hakons life, as the wound began to infect a large amount of his body. 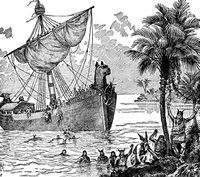 Hakon eventually healing from his wounds after seven years, returned to his family when they were part of the Dreadlands, he came to see his house in ruins, as the failed sons of Thomas Ruric attempted to take control of the people. Hakon could not stand to see his people at such a low point, so he took over the Dreadlands, and reformed the order of the Ashguard, although this time he took the entire Rurikid military and trained them for months upon months, until once they were almost as strong as they used to be. He then turned to the Empire, the place that had almost beridden of his family, he then embarked on numerous raids against the Empire, most notably against the Imperial Capital of Felsen, coming out victorious in next to all his fights. During one of his raids he recieved news that the world was yet again coming to an end, Hakon quickly issued an order for a mighty warship to be created, it was created just on time, he lead the Rurikid peoples across the sea and onto the Isles of Axios, quickly settling in a fort called Dunamis, where he would continue raiding and pillaging the Empire, all of his victorys were seen for naught as Hakon recieved news that the Emperor of Oren had set off on an invasion of the Dreadlands, he went to Vilichia where the Prince of the Dreadlands, resided but it was empty, the Dreadlanders had fled, So Hakon ordered for the entirety of the Ashguard to flee into a nearby forest, not much was heard of Hakon. 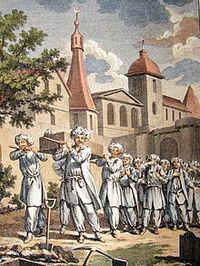 Hakon Ruric being carried from the Keep of the Krag to the Norlandic crypts.

Hakon eventually returned to fight alongside Arytom Ruric in the Coalition War, assisting them in beating the Empire, and building a new home, calling it Svenheld. They lived there for numerous years, during that time Hakon called a crusade known as the "Red Crusade" against that of the Turks of Haria, he fought them in a battle known as the Battle of The Sands, coming out victorious in that, he dismantled the Red Brothers and formed the Ashguard, although he only commanded it for a short time, before getting to old of age, he resided in The Krag for the duration of the War of Grudges, before coming to his death only a few years after that.

Hakon Ruric was arguably one of the most strongest, and intelligent Ruric that has ever lived, being victor of countless raids against that of the Empire of Oren, and the Grand Kingdom of Urguan, he was father to the most successful Norlandic King Javier Ruric.

Hakon died a peaceful death in the Norlandic capital of The Krag, thousands of Norlandic citizens and Soldiers, came to his funeral where he was buried in the crypts.

Hakon at the age of twenty formed the an elite military order called the Ashguard, having lead it in countless amounts of raids, and coming out victorious in many of them, Hakon quickly earned a name for himself as a military commander during their time in the Holy Orenian Empire, after he returned from his injurys after the Battle of Hoar Hill, he came to his house in ruin. He took up the mantle as Lord of the Bonefort, and reformed the Ashguard, he then trained them for months, making them yet again an elite military order.

Hakon continued to expand the Bonefort adding a rooming sections where all members of the House Ruric could reside, aswell as expanded the storage where there was not enough room for all the supplies that had been gaining from the raids.