Forest dwarves are truly the most unique of the dwarves, often not even living in their lands but rather living in solitude in forests or even with other races and groups such as elves and druids. This has made some of them highly dislike the other dwed, which is sometimes mutual, but more often they have at least some friendly connections with the Grand Kingdom of Urguan. Seeing a forest dwarf in the dwarven legion is not as rare as one may think, and tales speak of heroes of forest dwarf origins.

They are often travelers, roaming forests months upon months, meaning they have learned the ways of the forest can can navigate through them with more ease than any other dwarven sub-race, even better than some of the main races as well. This of course, may seem brutish, but their dwarven honor and dignity still shine as an example, although their greed sometimes goes other directions that are not gold related. 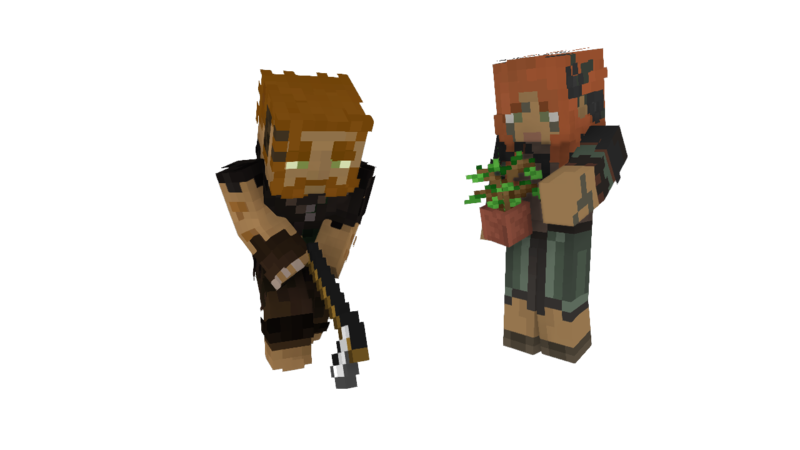 Much like with other dwarves, forest dwarf accent is often an for other races to understand, even if they are talking in common, though it's more blended between Mountain and Cave. They are usually unable to fully say the letter -h in words and tend to sound like a person with a Scottish accent. It may seem difficult to understand a dwarf at first, but it is just slightly modified Common tongue. This accent sometimes becomes softer due to their time spent with other races, but that is usually not the case. They are also known as dwed of the forest, knowing it unlike any other dwarf or human. This also means their diet has heavily started revolting around fish and berries, which is most likely the reason of their physical change.

Forest dwarves develop in the same rate as humans do, but they tend to live up to seven hundred years more than humans, sometimes even longer than that depending on the dwarf. Before dwarves live through their first fifty years, they are often referred to as Beardlings, though this may differ from the achievements of a dwarf in young age or if the dwarf is new to the community (In which case, a dwarf may be 300 years old but he could still be referred to as a beardling by some dwarves that may be even younger than him). Although they live for centuries, you can’t find a elder dwarf in every corner. Many dwarves die due to mining accidents or during his work, but this is a less common case with the Forest dwarves due to their area of living. It is also important to note that after six hundred years, a dwarf may start feeling weak under the pressure of his years, making him less capable with physical work. This of course, does not weaken his mind, but rather makes it sharper.

Ibless had not only cursed sons of Urguan by turning them into a short, stout, and an ugly race, but has also enhanced their greed, which has costed them many precious lives and relics. Luckily, the Creator has blessed the dwed with a strong heart, and a sturdy body, and a sharp mind. This blessing has turned dwarves into a proud and a resistant race that has lasted centuries.

Among the Forest Dwarves, the curse can be a little different; they have not outgrown it, but the greed centers to better the community they're in more than it does to better the self. This can seem altruistic, however, this also can create fierce competition between communities.

The forest dwarves, being that the clan remaining for them is the Treebeards, tend to follow the clan leader as is the case with any clan. Even so, they can be rather different in their outlooks. As many dwarves, they still have a high sense of honor, believing that if you help them in their time of need that they should be grateful their entire lives (and, similarly, if you did not when you could have, you may find yourself hated for as long). They also have a high amount of respect for others, pushed by Gloin, it's said, to discourage the jeers of his clansmates when some would find their skin darken and their beards short.

The art of the forest dwarves finds itself highly within woodworking. Furniture and housing made by their hands is sturdy, well-designed, and have their own elegance that might even overtake that of the Wood Elves. They also have come to be some of the best brewers, for they've learned to till the land and have a steady supply of ingredients to experiment with different alcohols.

As with all dwarves, there is a high importance placed in stories to the Forest Dwarves to be passed down, and though they might write them out in books made from the paper they produced themselves, they also enjoy travelling to tell them, very often putting it to a rhyme and rhythm as poetry or song to be told over and over again.

It is said that one knows they are in the forests of the Forest Dwarves by the soft sound of drumbeats. Though they may branch out to reeded and various string instruments, its the drumming which they are most known for, finding comfort in solid rhythms from a strong forte to a soft pianissimo, and understand that great courage and inspiration can be rallied from even the gentlest of strikes upon the skin. As such, many forest dwarves have found themselves to be excellent bards.

The Forest Dwarves are the direct descendants of the seventh son of Urguan, Gloin, who was fascinated with nature, the outside world, and the creatures which reside it unlike his brothers, and, came to differentiate himself with the other clans with the clan name that popped to his mind: Treebeard, first of the forest dwarven clans. Though accounts differ, it is said that Gloin's brothers were worried—and then angered—by Gloin's study and interests and took his disassociation as disinterest in the betterment as the race of a whole, leading to the exhile of the Treebeards from the mountains. Other accounts simply imply that when they founded Outer Kal'Urguan, the city outside the gates of Kal'Urguan in Aegis, it was a natural progression from turning their sights outward from the mountains, but their proximity shows their loyalty towards the community still. The Treebeards, original clan from Gloin, is also perhaps the last. There had been six, but the others were wiped out in The Blood Age.

The forest dwarves have become used to not feeling the need for the mountain and its caverns for security, now living quite happily within buildings made of lumber. Their settlements may be small, but tend to have their own natural sprawl.

Founded sometime during the original settling of the dwarves in Kal'Varoth upon the continent of Arcas. The Tribe of Hefrumm, more commonly known as Hefrumm is a thriving forest dwarven village nestled in the greener regions of the Kingdom of Agnarum. The village itself is surrounded by large hills, jagged peaks of mountains and vast field upon field of crops that make up the majority of sustenance for the dwarven population. The village itself is ruled under a High Chief, which is elected by the elders and general population of the forest dwarves. Its wood-land realms are guarded by the famed Thorns of Hefrumm, the warriors and defenders of the village. The village has a mutual alignment with their cousins underneath their very settlement allowing them to intergrate their special skills for the betterment of the dwarven race. The range of professions can vary as positions of governing power, scouts and rangers which hunt game and alert the hold of potential danger to the simple means of merchant and farmer which trade their crops for other resources.