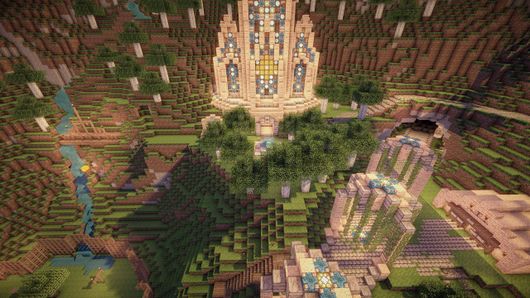 The Cloud Temple of Asulon.

Sanctuary of the Cloud Temple

The sanctuary was established by the monks whom settled Asulon before the arrival of the Aegeans. All newcomers to Asulon arrived here, regardless of race.

The occupants of the Cloud Temple Sanctuary were peaceful and expected those who visited them to do the same. They did not wage war on any nations. The monks helped those who need assistance with directions, advice or information. They operated a small shop that would sell items for quite cheaply and often left bread or fruit in chests for hungry travelers to enjoy.

As a new soul in this world citizens of Asulon could decide to take the path of holiness and join the monks of the Cloud Temple. Doing so meant devoting life to serving one of the Celestial Triumvirate and guiding those who appeared in the Sanctuary.

The Sanctuary was located at the approximate center of Asulon. There were paths for each race that leave the Sanctuary and go to the lands of the races.

When Asulon was abandoned the survivors from the races gathered in the Sanctuary before taking boats to Elysium.

When one was knocked unconscious or severely injured, the monks would quickly retrieve the body and take it to the Temple for healing. The monks were generally able to heal most injuries, no matter the severity.

A video of the Cloud Temple of Asulon

There were several notable features of the Cloud Temple Sanctuary.

The Monks were the caretakers of a large library, with room for many books. Some rare and valuable tomes were kept in the trust of the monks. Though this library had many tomes of which were assembled during Wilven's initial exploration of the Temple. Along with the main library, a hidden library filled with the most valuable tomes within Asulon was present, sealed behind an enchantment with the Power of the Triumvirate protecting it, very little people knew how to open it.

The monks ran a small shop on the Dwarven road. They would sell and buy items and dispense information to any travelers who needed it. Many of those in Asulon would donate old items or those they had no use for to the Shoppe.

There were several rooms available for the monks as well as guests to the Temple. Access was controlled to prevent troublemakers causing mischief in the Temple.

The monks took care of several farms, including ones with trees and melons. Travelers could rest in the farms and attached gardens or harvest the crops. The farms were tended to by monks or anyone who wished to aid them.