Catherine Joan (Waldenian: Katharina Johanna), the Princess Royal of Sutica and noblewoman of the House of Barclay, was Hereditary Princess of Savoy and Duchess of Junavos as the wife to the heir-presumptive Olivier Laurene de Savoie. During her tenure as consort to the future inheritor of the Southern realm, Catherine instrumented reforms to the South courts with the aid of her cabinet, The Princess of Merryweather and Joan of Alstion. Princess Catherine became Princess of Savoy upon the ascension of Olivier II in 1849. By scholars, Catherine was known by multiple epithets: Catherine I of Sutica, Catherine of Sarissa, Catherine of Merryweather, Katharina von Barclay, and Catalina de Savoia. Her Royal Highness The Princess Royal as painted by the Reinmaren painter, Adelwulf van Thirne, on the year 1835.

Born at the halls of Osser, a holding of the Crown, in the Sutican isles, and baptized Katharina Johanna Magdalene, she was the eldest daughter to King Georg I and Queen Johanna I of Sutica. She held the titles of Princess of Sutica and Duchess in Merryweather by birth (since her mother was Princess of Merryweather as well as Queen of the Commonwealth) and Princess Royal upon being designated as such at her private baptism.

Catherine was raised mainly at the Royal Palace of Sutica but would often take recesses, alongside her twin brother, north to the Duchy of Reinmar, the holding of her paternal kinsmen. Unusual for a royal princess, Catherine grew up close to her parents, who were very religious. She was raised to be religious too, and was often taken to visit monasteries during her childhood. The Princess Royal received a formal education in literature, history, and linguistics. By the age of ten, she was fluent in Waldenian, Savinian, and Auvergnat, though lacked any sort of proficiency in the common tongue. In 1832, she lost her father who, unbeknownst to many, suffered of acute epilepsy. Upon the incitement of the Sutican Civil War, and the subsequent remarriage of her mother to the skilled Franz Nikolai de Sarkozy two years later, Catherine was ordered to take refuge in the North as a ward to Cardinal Reinmar until wartime subsided.

At age eleven, Catherine was betrothed to Olivier Laurene Ashford de Savoie, heir-apparent to the Duchy of Corazon. The engagement was engineered by her mother and the Duke Olivier, later Regent of the Sutican realm, prior to her passing on 1835. In the months following, a bloodless regime change occurred when the Duke of Corazon installed himself as Prince of Savoy and the inheritor of the South after Johanna I. In light of both her and the Crown Prince Corwin's young ages, and Olivier's political might at the time, no official action was assumed upon the coup; foreign criticism, however, did run rampant. The Barclays of Reinmar were consoled by the evident security of status and future afforded to both Corwin and Catherine by the Prince of Savoy, with both of them permitted to retain their styles of Royal Highness and respective holdings of Merryweather and Sarissa. Prior to the marriage, Catherine had renounced her rights, and those of her prospective children, to the succession of the defunct Sutican throne, should any insurrection arise, with a provision that she would resume her rights were she to die a childless widow. On 17 Snow's Maiden 1838, Catherine and Hereditary Prince Olivier Laurene married in San Luciano at the basilica of Saint Lucien. The Countess of Sarissa at this time, with a gown and diadem fashion with golds of Ancient Haria and Hyspian silks, still looked all the child she was, aged but fourteen at the time of her wedding. It was said by Valentino Gradic, High Magistrate of the Realm, that in her appearance Princess Catherine was "statuesque and tall, with skin made of porcelain, but of a thin and awkward frame and nervous demeanor with no wifely merit to it." During this time she became increasingly close to the Landgrave of Alstreim, her uncle, and his wife Lady Nikita of Adria - both of whom were only slightly above four years older than her - in addition to the Lady Joan of Alstion. Since childhood, Catherine had a great confidence in a Sedanian lady, and ward to her late mother, Roberta de Chalons, and their friendship would endure well into their adulthood.

As the Hereditary Princess of Savoy, Catherine maintained sovereignty over the seaside County of Sarissa, to which she assigned a governor responsibility. In her motherhood, upon the birth of her eldest son Lucien, the young Duchess of Junovas found much difficulty. She was diagnosed with delirium and would refuse to engage, let alone acknowledge, her son and would reportedly starve herself to achieve the frame she once had as a maiden. After the births of her subsequent children, Catherine's disordered behavior seemingly stagnated and she was found to be much more affectionate with her daughters and second son, Olivier Guy; her fractured relationship with Lucien Aurele, although improved, was never intimately developed. 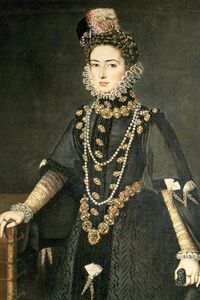 The Princess in Morning c. 1835 by an aging Adelwulf van Thirne. It is said to be his final completed portrait.

Princess of Savoy and the Sutican inheritance

On the year 1849, it was rumored that the Duke of Furnestock, an Orenian prince who was presumed to have died, had only feigned his death in order to live a modest life alongside his wife. The relative collapse of the Holy Orenian Empire's governance beneath Philip II's regime coincided with Olivier I's abdication to Catherine's husband, Olivier Laurene. On the year 1849, Catherine, by right of marriage, became Princess of Savoy and Protectress of the South. She immediately thrust herself into her responsibilities as the matriarch of her nation.

Full Title as Princess of Savoy

Full Title as Princess of Sutica