Caedric Edvardsson Ruric, also known as Caedric 'the Reclaimer', known more simply as Caedric (1738 FA - 38 FA), was the son of Godric Edvardsson Ruric and Eleanor Horen - Renai. Caedric was named Duke of Morsgrad in 1761 FA and crowned King of Norland by High Keeper Alisa Camian in 1764 FA after Chadmyr Edvardsson Ruric had acted as Regent during Caedric's youth. Caedric is best known for the Declaration of Norlandic Pride which refounded the title of King of Norland and reformed the Fifth Kingdom of Norland. Caedric's order to merge the Morsgradi Martyrs and the Brotherhood of the Flame increased both the capabilities and strength of the Duchy of Morsgrad's military significantly. His empowerment of the Red Faith to act as the highest judiciary of the Kingdom of Norland and further outlining of the roles and responsibilities of each section of government laid the foundation for the newest era of the Kingdom of Norland.

In Caedric's youth he was fond of the old histories of Norland and the, often violent, struggles his people faced against both outsider threats and the world around them. Knowing he was at risk of assassination during his childhood from the Orenian Empire he was kept hidden away until he was of age to properly defend himself and his homeland. When his father, Godric, died he was struck with grief at the loss of his father; he however knew he must take up the Ducal Throne of Morsgrad so as to ensure the survival of his nation and his people. In 1761 FA Caedric was named Duke of Morsgrad pushing many reforms and reconstruction projects aimed to assist the war-torn and struggling Norlandic people. This time was defined by a reinvigorated interest in Norlandic history, patriotic fervor, and anti-Orenian sentiments which Caedric was greatly moved and motivated by and this then lead to his Declaration of Norlandic Pride, the reclamation of the title King of Norland, and reformation of the Fifth Kingdom of Norland. Caedric's belligerent attitude towards the Heartlanders of Oren often lead to diplomatic issues between the nations and nearly lead to his assassination on multiple occasions however but his agility and refined skills in combat saved his life. The most notable occasion he nearly was murdered was when he marched with a mourning party to retrieve the body of his deceased cousin from Helena. When he and his mourning party approached the bridge to Helena they were halted by a squad of Imperial State Army soldiers and Caedric was approached by the Foreign Minister of Oren and asked to stand the unarmed mourning party down and send them away as the Orenians felt threatened by their presence. He agreed and ordered the mourning party to show the frightened soldiers that they were unarmed before moving to a pavilion to speak in relative privacy with the Foreign Minister, after a few short minutes of respectful conversation the Holy Orenian Emperor and King of Haense, sick of waiting for Caedric to make the first move to attack sent the Hounds of St. John to murder him and his single guard in the pavilion. Caedric seeing the Hounds surround the pavilion simply gave a short nod to the gloating King of Haense before turning around and running back to his people in Morsgrad. He had been assisted by Sonna, the High Priestess of Wild Faith, in his great retreat and became close friends with her, seeing as he owed the woman a debt for saving him from the Imperials who hunted him. Though after his son came of age, Caedric grew tired of Kingship and the duties and responsibilities which befell him and so he chose to abdicate his Crown to his now-of-age son, Halvar Edvardsson Ruric. Caedric would go on to tend to the land for ten years, living a life with his wife and second-born child Lydia Edvardsson Ruric. This self-exile was short-lived however when he looked upon his land and yearned for more, once again. He would return to the Kingdom of Norland and meet his newly wedded son before requesting be made his Hand. Caedric participated in the Inferi War killing countless Inferi Legionaries, commanding the Seahelm to bring down three great behemoths, and commanding a ballista crew to bring down a giant gargoyle, during the final battle he had assisted in the killing of the Creator Egg and Aengul Gazardiel. He was one of the first settlers of Nyrheim, also know as Almaris, founding Camp Olaf and eventually assisting in the construction of the great city of Varhelm. Caedric is known to correspond with a variety of people and assists the Kingdom of Norland in all matters with his counseling. 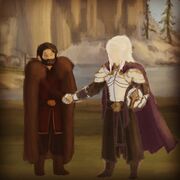 Caedric often appeared in his crimson robes, his Ducal Morsgradi Chain and half-plate with a dire wolf's pelt cloak, or his Northguard plate and tabard. During the start of his reign in 1761 FA Caedric had not yet grown his beard out but two years after, in 1763, he dawned a full beard which he kept clean with daily care. Caedric followed the Norlandic custom of cleaning oneself as often as possible, not allowing for his own appearance to degrade past any respectable level of cleanliness. Though in war and battle would often degrade the ability to maintain high personal hygiene and thus the standard of cleanliness would lower, after such conflicts or during respites he would be found to clean his face and beard as much as possible. Caedric stood at just over five foot seven inches (5'7/ 170cm) he often stood at higher points so as to compensate for his short stature. His deep blue eyes, dark black hair and fair complexion was a clear sign of his Edvardsson heritage.

Caedric's mentality has shifted and changed through his years. There are three distinct period which had shifted the mind frame of the King. The first period would be his youth, as the heir to the Duchy of Morsgrad he was sent off to learn the essentials of leadership. At this point the young man would learn all he could of his people's history, faith, and relations with the outside world. The second period was when he took the Throne of Norland, finding he'd need to make allies, reform his nation, and bring back the pride of the Norlandic people. He would often extend olive branches to those discontent with what he saw as Imperial Tyranny, sending envoys to many nations and settlements, even to the King of Haense after news of their discontent position reach him. Though he was often very sporadic in his decision making which lead to a growing list of detractors within his realm he ultimately acted in what he knew as the best interest of his people, his faith and kingdom. The final period of thought was formed during his post-kingship. Pulling from his earlier years mentality he would seek more knowledge, but not only in matters of leadership, but in religion, culture and history as well as seeking to further refine his fighting skills. As a self-proclaimed Wanderer and the selected Regent and Hand of the King he would take his duties seriously, however always making time for time for himself and his wife.

Caedric's legacy is one of reclamation and passion. He is known to some as 'the Reclaimer' for his reclamation of the Fifth Kingdom of Norland and the title of King of Norland. In his reclamation he would reform much of the new Kingdom's judicial, executive, and legislative functions. In regards to his reformation of the judicial aspects of the Kingdom of Norland he would establish the Red Faith as the ultimate judicial authority, so they may enforce the religious code of the Red Faith, the Red Law. In his reformation of the executive aspects of the Kingdom he made no illusion to his wish to enshrine his clan, Edvardsson, as the sole royal family by their divine right to rule. In his reformation of the legislative functions of the Kingdom he had nearly totally dissolved the Chiefsmoot as a regular function of the Clans of Norland instead leaving it to something that may be called when it is needed which, during his reign, was never. His public writing and actions against the Church of the Canon have led some priests to dub him 'the Mad' or 'the Deranged' for his claim that he, along with the coalition of descendants, killed the newest incarnation of the Creator in the final events of the Inferi War. His actions as Hand of the King for his son's and eventual grandson's reigns have been recognized as important steps to maintaining a unified Kingdom which could oppose any unjust forces set against it. His passion for scholarly endeavors, martial prowess, and diplomatic mindset solidify Caedric as one very worthy King of Norland.

Caedric sired four sons and three daughters with his wife Katyusha Willow. The firstborn, Halvar Edvardsson Ruric, would go on to become Kings of Norland and all of which maintained their divine heritage of Herald's Blood.