The Barony of Keintania was founded in 1618 by Ser Corvus Keint, the fist baron of Keintania. It is located next to the Duchy of Savinia, behind the County of Hallowfell and near the city of San Adrian. The Barony of Keintania stands as the seat of House Keint, a noble house that originated from the Orenian empire, which then later swore allegiance to the Kingdom of Courland. House Keint started to struggle along with a couple of other noble houses after Courland reformed under the Holy Orenian Empire as Principality of Evreux.[1] The Fortress of Keintania was built on top of a little hill, overlooking the Castle of Hallowfell. The fortress itself is manned by the Guard of Keintania, House Keint's personal retinue.

House Keint was founded long ago, they lived in Johannesburg, the old capital of the Orenien Empire, when the tragedy happened, all of them where in Johannesburg except a few ones, who survived the tragedy and are now the last Keint's alive. After House Keint fled the tradegy the patriach at the time Ser Corvus Keint pledged his vassalage towards the King of Courland. House Keint served the Kingdom of Courland loyally and faithfully all the way up to the point it was reformed. When war broke out between the de Savins and de Castros against the Principality and Oren, House Keint along with House Merentel took up arms and joined the reformed Coalition against Oren. As the Orenian Empire met the demands of the Coalition, thus ending the war between them [2] Keintania formed into a Barony ruling a small patch of land in their name. After Ser Corvus went missing, the new Baron of Keintania, Thomas Tarsington-Keint swore an Oath of Fealty towards the Kingdom of Santegia and King Abdes de Savin.

After Abdes abdicated the throne of Santegia, his son Leoiarizaltzu de Savin was crowned King, of course wanting to stay under vassalage of Santegia, Lord Thomas went and swore another Oath of Fealty towards his new King.

On the 3rd of the Grand Harvest, 1638, Thomas Tarsington-Keint, the Second Baron of Keintania, declared the Barony of Keintania as independant from Santegia.[3] However after their independance was declared, Santegia declared war upon Keintania, starting the Keintanian Rebellion. 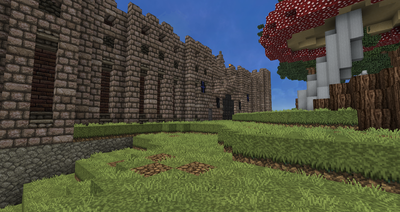 The Fortress of Keintania's Entrance

House Keint is vassal of the Kingdom of Santegia, thus ultimately subject to its government.[4] Keintania has its own governing body within the town, the Keintanian Council .

Keintania is ruled by the Baron and Patriarch of House Keint as the Chairman of the Council. Other council members include Steward who is tasked with administrative duties in the town, Treasurer who is responsible for all income and control of expenditure, and the Commander of the Guard of Keintania. Although the council act in private, members of House Keint are invited to meetings of the Council.

Keintania is located from the North West of Santegia's Capital City, San Adrian, and is directly behind the County of Hallowfell.