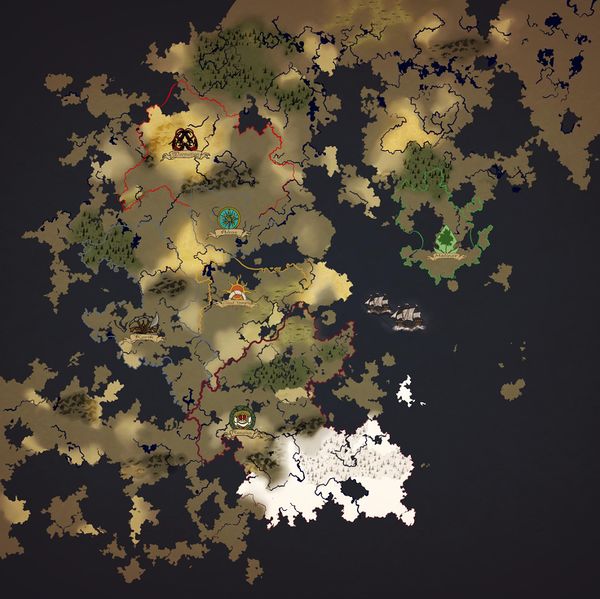 Asulon (1351-1414) was the second major and third overall map used on the Lord of the Craft, introduced after the Fall of Aegis and the escape from the Verge. The descendants traveled from Aegis through a portal, leaving the realm of Aos and entering the realm of Eos. They arrived at the VERGE, and they then sailed to Asulon. It was far larger than Aegis and featured the Wilven Sanctuary, approximately in the middle of the world. Racial homelands were to the north, east, south and west. Asulon also became known for having longer travel times than were found in Aegis, as well as producing many more nations than were found in Aegis. The world of Asulon existed until the inhabitants were forced to flee from a series of natural disasters, whereby they left on boats to Elysium.

Following the Destruction of Aegis those who survived Iblees wrath escaped through the Verge and sailed on ships to reach Asulon. Once there they were surprised to discover that the world was not uninhabited. The Mori'Quessir had already been living in the lands for hundreds of years, and there were ruins of ancient civilizations scatted throughout the lands.

Syrio Forel - Former High King of Alras, known for his suave tactics in diplomacy and his great skill in accumulating vast amounts of wealth, his name went on to almost embody the principles to which the Kingdom of Alras stood for. Though originally at odds with the Grand Kingdom of Urguan during the reign of Thorik Grandaxe, detached from the nation and brought forth the illustrious merchant nation of Alras.

Kjell Ireheart - Former Grand Marshal and founder of the Empire of Urguan, Kjell was a controversial figure, who many revered and others feared. Declared a Paragon, for his claims to have slain six black dragons during Iblees's reign of havoc upon Aegis, he was regarded an excellent strategist, a fine warrior and a mighty ruler. He served the dwarven nation for many centuries until his eventual death in the halls of Kal'Azgoth. Godfrey Horen - First Emperor of the Holy Oren Empire. Widely regarded as the greatest leader humanity has ever known, Godfrey united the weak and ailing human kingdoms of early Asulon into the Holy Oren Empire, securing human military and political dominance among the descendants for over a century.

Pius Silverblade- Duke, High Pontiff, and Grand Knight of Oren during the time of Asulon. Was one of the major players during this time and a very important official under Godfrey. Dawn Perea - Originally a popular baker and proprietor of 'Dawn's Bakery' in Al'khazar in Aegis. Later a Queen of the kingdom of Salvus in Asulon. Widely regarded as a hero of the people, hearing her name was like a warm hug. Until she was slain by her own people due to suspicions that she was a witch.

Eze'kiel Tarus - Former King of the Kingdom of Renatus.

Cataris - Originally a Guild Master of the Mages' Guild in Aegis, he was banished from the guild during the reign of the Undead by Arch-Mage Bell, the hero. He met his demise in Aegis but was revived through remnants of Iblees' dark magic in Asulon. He returned to the world in a lesser form of his old Undead self, a Lich and the first of his kind. He was a feared individual whose influences covered the land and renowned for slaying mages and magic users across Asulon. Thus resulting in the name of "Bane of Magic". Cataris later met his demise in late Asulon through a spontaneous death. Most likely the result of over exherting himself and depleting the very magic that kept his bone animated.